I've recently added a medical section and recce element to the Swamp Tigers. Also for scenario purposes only (far too overpowered to be part of a standing force in our scale of games) I've added a Rhino APC for the guardsmen. The Sentinel was converted by our very own Dieselmonkey and normally alrering a classic sculpt would have me in a fit but i genuinly think his conversion is far better than the original format so i dint try and retrofit it.

In contrast the Rhino was made out of three utterly destroyed kits, i managed to salvage enough parts to make one 'runner' out of the three (which is pretty much how i imagine the 'tigers' manage their vehicles on long campaigns).

Oh and the sentinel is such a light vehichle i thought it prudent to make a 'dismounted and mounted' crewman set.

Some random pics of an old game

Delving into my cogitation engine's archive stack I found some pics of a game I played with my girlfriend over a year ago, and thought I'd share them. As the game was set at night (it was basically two rival gangs of smugglers launching a simultaneous raid on a customs station) I filtered the pics to make them look like night vision shots. I don't recall much of the story line or even who won (though I doubt it was me!) but here they are anyway, in case they're of interest. 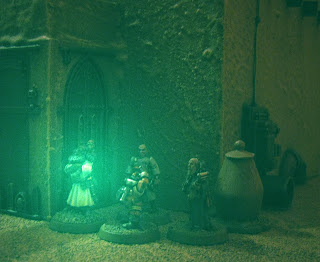 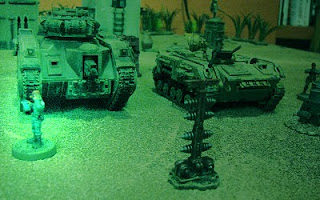 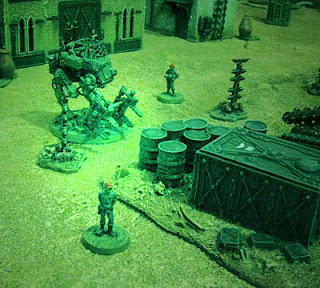 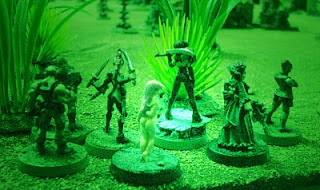 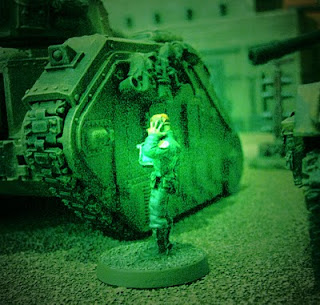 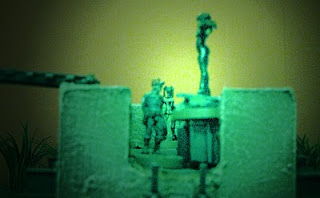 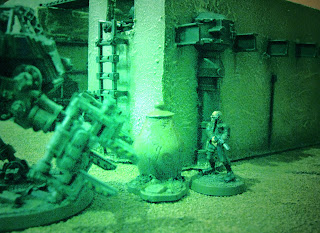 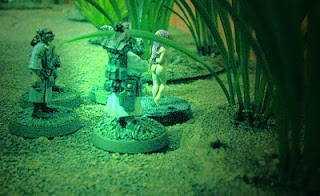 Forget Me Not Blues.

This squad still needs the squad leader (the old 'slaughter margine' Judge Dredd mini 'mek' and if anyone has one spare, let me know...)

We had a game the other day, using a player-created variation on the Necromunda rules called Book of the Arbitrator. This set is a collection of house rules and a huge amount of work’s gone into it. The writer Torben Kastbjerg explains his reasons for altering things, making them just the way he and his own gaming group like to play. As such a lot of work had gone into Book of the Arbitrator we decided to give it a go.

The main change from our point of view was the implementation of an initiative based integrated turn sequence. Obviously this changes the game a huge amount and this particular variant on the concept took us a while to get our heads around. I’ve seen this idea presented in quite a few different ways, and this came across as one of the more complex iterations as it required characters to be given two new Initiative scores. We found it a little over complex for the game (perhaps just alternating between each player’s characters might have been better for us).
Another change is the way that injuries work – there’s no Injury roll, but characters generally have a lot more Wounds (and suffer stats negatives when they lose a certain amount). I assume this is because the integrated turn sequence makes Recovery hard to implement, so I can see why it was done, but we really missed this staple of Necromunda.
Perhaps the part of the rules that caused the most debate for us was the way the rules regarding moving and shooting, and the modifiers that go along with these have changed. In some ways more movement is possible as you can move while firing more weapons, and do so on Overwatch (at half Movement). In other ways, the introduction of an Aim action to make your shots more accurate if you don’t move would seem to mitigate against this. I think most people would agree that the more things happening in a game the better, and this is as much down to the scenario victory conditions as it is to the mechanics – after all, its all very well sitting back a firing but if you have to capture an objective or get off the opposite table edge you generally don’t win by standing and shooting.
Character creation has seen a massive overhaul, and this is where this set of house rules really shines. Characters start off with a base profile defined by their race, and then apply various bonuses to this based on their archetype. These are simple roles to define fighter, marksman, sage and scout type characters. Furthermore, there’s a huge amount of skills that characters can utilise, each serving to define the character more – great stuff there.
Torben has provided a great range of campaign options, including an implementation of the Mordheim Exploration-based campaign. In my opinion, this style of campaign is much better for open-ended campaigns, though the territory system is better suited to those looking to play exclusively within the Necromunda setting. This set of rules isn’t tied to gang warfare in the Underhive, so the Exploration system provides a more open backdrop that any faction could get involved in.
In general, the rules are (in character at least) a hybrid between Necromunda and Inquisitor. As a group, our reactions were mixed – we liked some bits and didn’t like others. Some things made us think how we’d do them differently and others what we’d alone. In all, Torben should be commended for writing a set of rules tailor made for his own gaming group and for presenting them to a wide audience. Even if people don’t use them entirely as written (and there’s no obligation to!) he has put a huge amount of work into the project and that alone should show others wanting to write their own variant rules sets what can be done.
I’ll leave the other guys to throw in their comments, as I’m sure I’ve missed some of the points we discussed. In the meantime, here’s some shots from the game we played, which featured a Sensei Warband (with a xenos Piscean which we counted as a Kroot) vs a human defence force patrol.
Cheers! 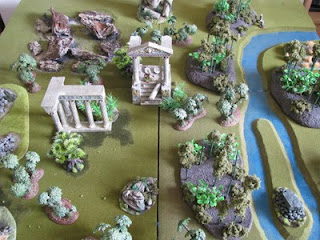 The field of battle - ready for the plunderin' 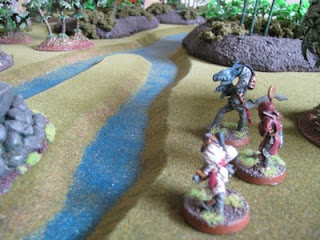 One half of the Sensei warband. 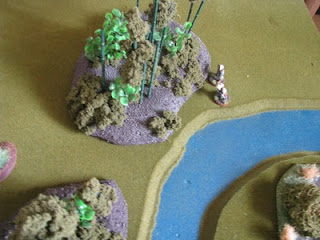 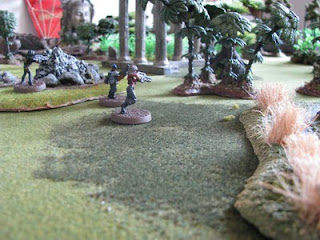 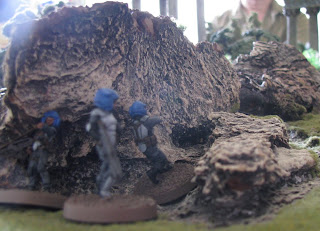 The defenders close in on the intruders. 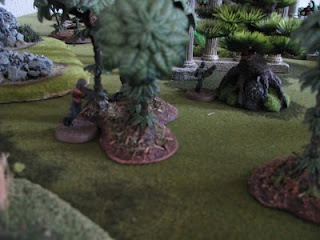 A fire fight breaks out. 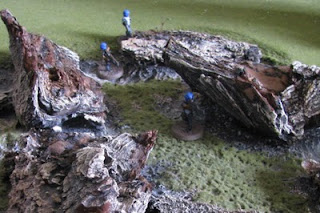 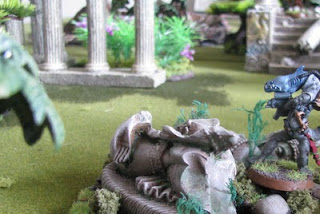 The Piscean seizes his prize. 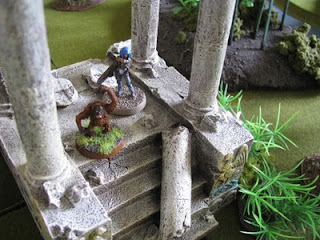 The Defence force hold the central temple and the game ends.
Posted by Colonel Kane at 18:52 2 comments:

Back into the old painting.. today i finished of the Sensai Band, made some scenery, painted two 'ships survivors' for another FNM faction, finished a tech priest and made a start on a Jokearo... PHEW!

So here we go:

Right the sensai band are almost finished bar basing and some minor details - not the greatest work i've done but after a six month painting break so it takes time to pick up speed again.

The other four minis will be 'FMN' citizens from the wildlands.