We played a test game to try out the Rogue Trader robot rules prior toa larger, GM’s game the Pontiff will hopefully be running soon (as soon as Captain Jack is off nights!) The battle was between a single Conqueror Class robot using the old Rogue Trader rules, versus Patrol Drake (with around 2000 gang rating’s worth of members). It was a fairly even match and the we added in various rules for random movement when the robot didn’t have a target, just so it didn’t just stand there doing nothing. The battle program worked well when it did have a target, to such an extent that anyone not hiding when in its frontal arc was pretty much dead!


+++CONTACT REPORT DKK-1O/Z+++
At 09.22 local, Patrol Drake answered a distress call from a bonded Archeo-logist operating in the wastes of the restricted Zone KK-12. They had no way of knowing what would await them.

What the patrol found was a mining site, from which had risen from amongst the wreckage of past wars a fully functional war-robot. The Archeo-logist had taken cover behind her machinery, while the robot lurched and shuddered in response to long-corroded programming.

The moment Drake’s patrol arrived, the robot targeted them with its autocannon, the blast knocking Corporal Drake to the ground and wounding Signaller Mak. Trooper Reko went to attend to Mak’s wound, but was initially driven back by the weight of fire, though he spent the remainder of the contact staunching Mak’s bleeding, before being wounded himself and dragged clear by Specialist Kiri.

Upon coming under fire, the remainder of the patrol split into two groups and advanced using the cover of vegetation. Lance Corporal Kash led a group of the local defence militia, working his way around to rescue the Archeo-logist, who they successfully exfiltrated.

The second group engaged the war-robot. Troopers Tyrik and Serik fetched melta guns from their transport and stalked the robot through the vegetation as it lurched about, seemingly at random, seeking to engage the stealthy targets. Trooper Tyrik closed and got off a shot, but the robot’s armour was proof against the blast and Tyrik was knocked to the ground and stunned as it landed a heavy blow upon him. Serik got off three melta gun blasts, damaging the robot, but was unable to defeat it before his weapon ran out of ammunition.

The Archeo-logist rescued, the patrol recovered its wounded, consolidated, and withdrew. Their primary rescue mission was complete, but it now seems there is a potent war-robot loose in the wastes. We have no way of knowing when it will turn up next. 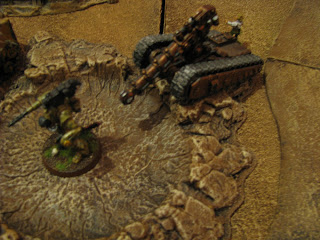 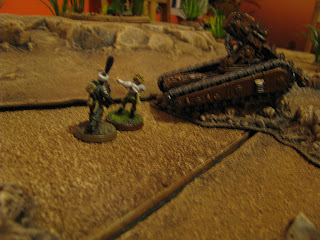 The Archeo-logist is escorted to safety. 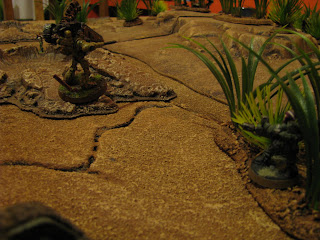 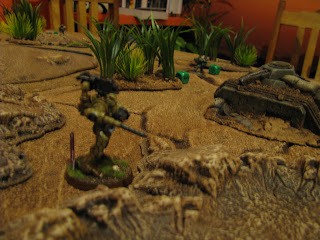 March of the Robot 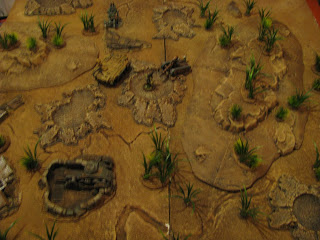 Aerial recce of the battlefield.
Posted by Colonel Kane at 13:34 5 comments:

March of the Robots

So, we're planning a game of Necromunda, with the gangs going up against the robots (using the old Rogue Trader rules found in the Warhammer 40,000 Compendium). Having looked at the rules and matching them to the miniature shown in the post below, we have a Conquerer, who with a standard load out and battle program will come out at around 200 points. When converting units from 1st/2nd edition 40k to Necromunda you want to apply a x10 points modifier to arrive at a rating (you can see this in action if you compare things in the 2nd ed codexes to the ratings of the same things in Necromunda), which gives a rating of around 2000 points. As it happens, that's about the value of Patrol Drake.

Only problem is a Conquerer has a Toughness of 8, which most gangs will struggle to harm unless they raid the quarter master's stores before hand. I reckon a couple of melta guns, with the rest of the gang running interferance should be fun. It may end up culling the gang down a bit, but that's fine with me and all part of the fun!

Oh yeah, I just noticed we have our first blog follower - hi Chickenbane! :-)
Posted by Colonel Kane at 08:27 1 comment:

More peeks of things yet to come...

Not amazing pics cos they are done with a camera phone.

Some mercenaries to go with the above:

Some more garrison troops to go with the existing couple: