A semi civilian vehicle for government characters in the campaign.

Either
All over sand

Colonel #DELETED#,
I have disturbing findings to report from the patrol into the equatorial belt, lead by Cpl Drake. They ran into more than just the expected Eldar Pirates, who were suspected of holding one of the Mining Guilds men in an abandoned tropical zone. This resulted in the possible death of at least one Guardsman, and the Guilder. There are also disturbing reports of troopers suffering inexplicable physical problems leading to the jailing of one Guardsman. We have limited Pict scans from the area, due to the aggressive nature of the local flora and fauna to the machine spirits on the equipment supplied #DELETED#.

From the outset there are inconclusive scans of two quicksilver mutants who over ran the pirate position in the first moments of the engagement. The Eldar were ripped to pieces before they could get a single shot off. The creatures identified as possible #DELETED# and were so fast that they caused the patrol severe difficulties to deal with at all. Unfortunately the Pict scans show #DELETED#; however the mutants caused enough of a distraction and allowed the tribesmen following time to get into favourable positions. From the ensuing fire fight several Guardsmen were knocked off their feet, and only the swift actions of the medic saved the patrol from destruction by healing Cpl Drake and several other members of the team.

Cpl Drake is to be commended for taking control of the situation, after his wounding. In decisively taking the fight to the enemy, enough casualties were caused to force the mutants to retreat. It appears they were broken after concentrated fire from the entire patrol and are suspected to be #DELETED#. No remains of the #DELETED# were found after the action, unfortunately. However one tribesman was captured and is currently imprisoned, and guarded by sanctioned Psykers along with the guardsman who suffered mysterious effects during the mission.

My Lord, I believe this has to be of interest to you. Your knowledge of the splinter fleets can help us +++Transmission Lost. Unknown cause+++ pict files are currently being re-built 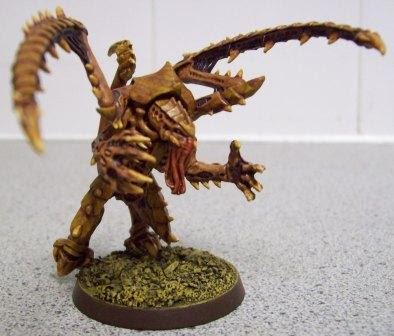 It would appear that Jeriko Reach is about to receive more unwelcome attention. Do you fear the wild lands? Well you should, as you might bump into this one monster gang!
The lead creature of the hive mind is slowly assessing the potential of the planet for the Hive's needs and what their alien minds will decide nobody knows.

Here's some new conversions for Patrol Drake. Most of them have headgear appropriate to the desert terrain and native culture of Jeriko Reach, inspired by British special forces in the African campaigns of WW2.

Most of them have IR goggles, which are taken from the plastic Space Marine Scouts kit. As well as looking cool, these serve a use in a tactic I've been trying out, to varying degrees of success, involving the grenadier laying down a smoke screen, which the marksmen with IR gear can fire through. I've added a touch of green to the desert camo, which is appropriate to the terrain, and I was inspired by a picture of a new hybrid DPM the British Army is trialing which adds small green patches to the desert DPM. 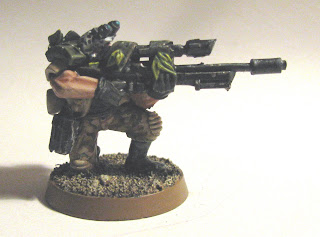 A Sniper, made from the Catachan Sniper model, with extra bits and peices such as Cadian shoulder pads, ammo pouches etc. 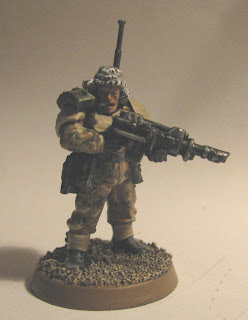 A signaller, made from various Cadian and Catachan bits, plus a Tallarn head. I gave him the carbine lasgun after reading an Osprey book on the Indonesian Confrontation, which showed a signaller carrying a sten while the rest of his section carried SLRs or M-16s. 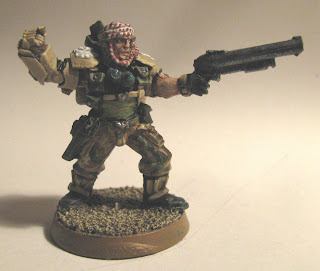 A new version of Corporal Drake, equipped with the power fist the patrol picked up from the quartermaster's stores some time back. 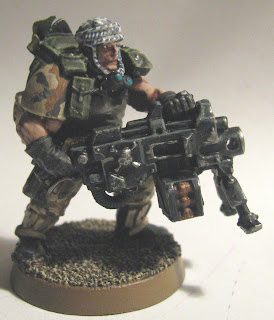 A new version of Specialist Falk, who was previously equipped with a missile launcher. He never once hit anything with his old weapon, so was given something with a higher rate of fire. The conversion took three goes to get right, and the final version shown here uses the legs from a metal Catachan officer, arms and weapons from a Space Marine Scout, head from a Tallarn and various other bits. Of course, he was wounded and subsequently died after the first game I used him in! Never mind, he'll make an appearance as a new character.
Posted by Colonel Kane at 08:09 4 comments:

It's almost a production line! The Skip truck and the Half track are painted, and are awaiting weathering. I have currently ran out of the required powders, and hope to remedy that problem before the next game. However, I do have an 8 wheeler that I have just started on. It's at the pre-build stage where I'm working on where view ports, stowage and engine louvers are going to be placed. You can however get the general idea of its layout. 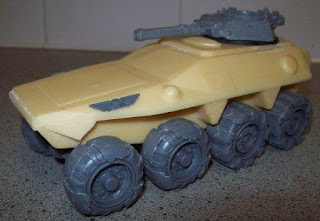 Have some pics of a half track thats been built for Jeriko Reach. It just needs some extra stowage and a few alterations before painting and we're away. Just as a point of interest, the Henries' truck is currently being painted and I will post pics of that when complete. 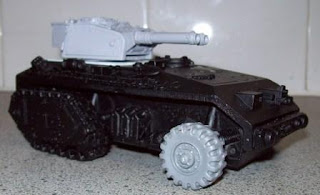 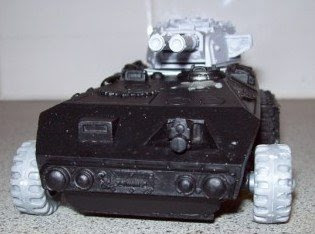