Pirates off the Starboard bow!

Well its nice to finally produce some finished miniatures, and to be honest these Orc Pirates by Black Scorpion were a joy. They have enough detail to be interesting without being overloaded and distracting. So here are some of the Piratical Orc crew that will be terrorising some unfortunates in the near future!
The Red Corsair Kaptin Kindly 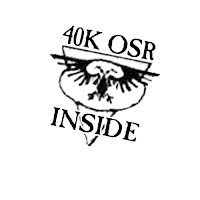 Thanks to Porky over on the Porky’s Expanse blog, there’s been a fair bit of chat recently about ‘old school gaming’, in particular as it relates to 40k, in the form of Rogue Trader. As someone who likes to mess around with this type of gaming, I thought I’d set down what it means to me.

Just to clarify, this is my own view of things, and not necessarily that of the other guys in the group who contribute to this blog. I’m sure they’ll be happy to chip in with their own views too. I’d also like to ensure anyone who cares that I play all manner of games, including the most recent editions of Warhammer and the likes, so I’m not preaching or trying to convert anyone away from their favourite game!

What I regard as ‘old school’ isn’t primarily about rules, miniatures or background setting, though these undoubtedly come into things with the type of game we play. To me, ‘old school’ is all about freedom and entertainment. It’s treating a game as a cooperative, story-driven activity, though one person is still actively trying to ‘win’ (because the characters represented by his miniatures are often fighting for their lives!). It isn’t competitive and it certainly needs no FAQs – the rules are just there to provide structure, not to confine the action.

I’d actually go a bit further, and make something of a leftfield suggestion. I’d say that we live in an increasingly technical, specialised society, and as such those who think primarily with the left hemisphere of their brains (that dealing with logic, reason etc) dominate many aspects of our world. ‘Old school’ harks back to a time before the rise of the ‘left brain thinking’, technological society, when the right hemisphere (that dealing with creativity and intuition) was more important than it is now. I’d back this up by observing how people fixate over the wording of rules, rather than over the possibilities they present, and how some people are always saying that ‘they’ understand the rule, but that ‘someone else’ may not.

So, to yank the steering wheel back and haul the juggernaut of nonsense back onto the hardpan, Rogue Trader is, for me, representative of everything I want from gaming. As a rules set, its all over the place, but that’s fine with me. It’s far from the most sophisticated of sets in content or execution, but its built in such a way that GMs and players can easily get under the hood and tinker to their heart’s content. Furthermore, the setting is incredibly open, relying as it does on familiar and well-loved archetypes, meaning that almost any cultural motif can be riffed off of, plumbing untold depths of creativity in us all.

For me though, the best thing about it is the way the rules continuously refer to this nigh-extinct being known as a ‘games master’ – a player who, because he actually wants to do so, sets aside his participation as a belligerent (for want of a better word) and assumes the role of ring master, entertainer, referee and conductor (as well as host and sometimes griddle cook!).

I’m a GM far more than I am a player, and I love nothing more hobby-wise than creating the whole set up for my mates to enjoy, including the table, miniatures, story and special rules. Fortunately, I have a small group of friends (and more on the interwebs) who feel the same. Other people struggle to convert their mates to this type of gaming, which is understandable, but worth pursuing. If you succeed, you’ll find this type of game is at once incredibly ‘grown up’, but at its source entirely childish, as you’re effectively entertaining, even channelling, the child within.

I may have strayed in preaching then, for which I apologise! Anyone have any thoughts on this issue?
Posted by Colonel Kane at 19:46 5 comments:

New additions to the bridge crew! 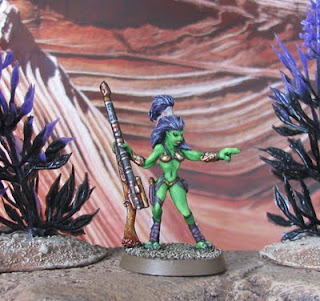 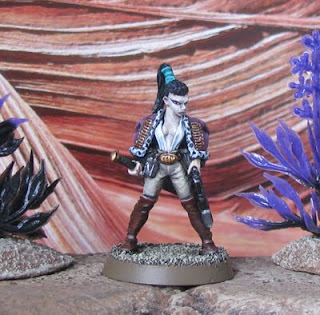 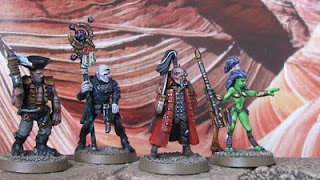 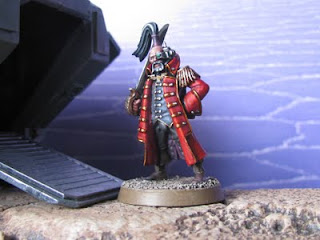 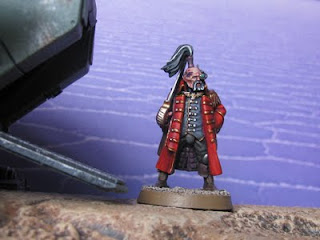 Just finished up a 'Privateer Godwin' from Hasslefree Miniatures, which following a headswap with a plastic Space Wolves Wolf Scout is a Rogue Trader. I hid the neck join using the smallest eagle from the Forge World Imperial Eagles etched brass set, and overall I'm pretty pleased with him! I'm currently working up a retinue of odd characters, including several from Reaper's Chronoscope line, so hopefully they'll make an appearance in a battle report soon.
Posted by Colonel Kane at 09:42 4 comments:

Here are some pictures of the APC that featured in our last game. It's my first attempt at using the (then) new weathering powders that I have had hanging around in my place for ages. I think it's come out fairly well, there are areas that could be improved but at least I have around 10 of these vehicles in various guises to mess about with.

Finally heres a trio of minis that I will be working on in the near future.

Only a brief shot, but there is more to come as soon as I can get my hands around a brush for a reasonable amount of time!
Posted by Martini Henrie at 10:10 3 comments: