Just started the task of assembling and painting the trees themselves. Each is painted Citadel Foundation Gretchin Green. The leaves are then given a Citadel Wash Thraka Green, and the branches a Citdadel Wash Devlan Mud. I'll probably add a drybrush of Bleached Bone to the whole thing, to pull it all together before mounting on the bases and apply detail.
More soon... 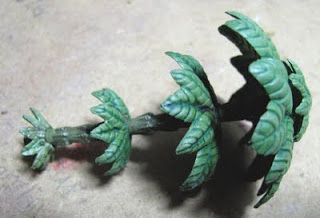 Posted by Colonel Kane at 11:12 No comments:

Well, it's been a while in the making so I thought it's about time that I showed the Necromunda buildings that I had posted earlier in their painted state. So with no more ado, here they are.

Here's the second stage of the jungle trees.
The bases were painted with Daler-Rowney 'System 3' Burnt Umber, then drybrushed Burnt Siena, then drybrushed Buff Titanium. I tend to use DR System 3 on terrain, as when it sets it retains a flexible finish, so if the terrain flexes at all (as the GW plastic hills can) the paint won't flake off.
The three colours I used equate to Citadel Scorched Brown, Bestial Brown and Bleached Bone, so everything should match up.
Next up is the plastic trees, then the ground cover. 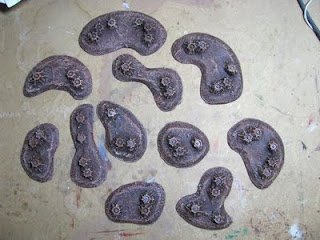 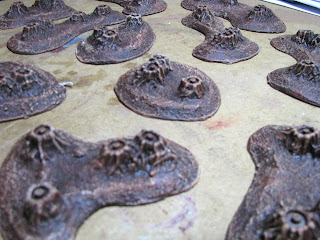 Posted by Colonel Kane at 09:59 No comments:

I've just started making some jungle trees, and as Krug asked about buildings in a previous post, I thought I'd post the progress of these as I went along. The plan is to create enough 'stands' of jungle trees to dominate a 4x4 table. I'll be making them in two batches - the first will be pretty generic, so they can be used in any setting (we've also been playing a Vietnam game, so these will be used for that) and the second batch will be more 40k in style, with various bits and bobs on the bases.
I have loads of the GW plastic trees, so wanted to use them, probably along with some aquarium plant bits too.
I started out by cutting kidney-shaped bases from 5mm foam core. I then chamfered (is that the phrase?) the edges, first with a scalpal, and then with a sanding block.
Then I glued on the bases of the plastic jungles trees, and painted filler over the whole base. Once that was dry I dabbed wood glue around and sprinkled sand in various places.
So this is where I am after an afternoon's work. Once this lot's dry I plan to paint the bases and use ground up dried leaves as leaf litter, to give a realistic 'jungle floor' look.
That's it for now! 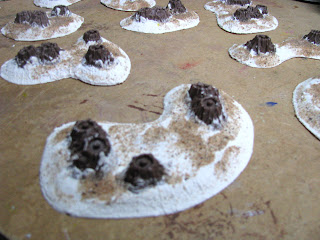 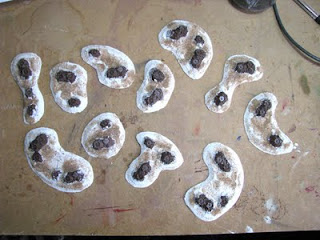 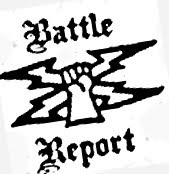 Exorcists Space Marines vs Sensei Warband
This game was set up pretty much on the fly – Captain Jack and myself had a spare morning and so Jack brought some toys around to mine for a game. We decided to go for a change and use different warbands to normal. What we came up with was as follows:
The Exorcists
Captain Jack’s Exorcist Space Marines are really nicely converted. He used the stats for a Chaos Space Marines from the Necromunda Outlander bestiary, adding equipment as seemed appropriate. 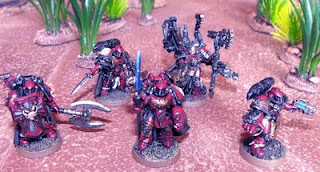 The Sensei
This band was put together using the rules from Realm of Chaos. They were pointed and stated using the rules from Rogue Trader. The psyker rolled up four Telekine Wyrd Powers, rolling Force Field, Assail, Crush and Fists of Fury. These three characters came out at an incredible Gang Rating of 1736, which seemed excessive, until the battle started! 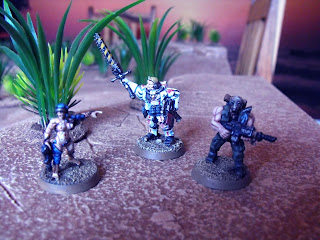 Terrain
We used a table dense with flora, and you’ll notice from the pictures an overall purple tone. This isn’t a picture error (honest!) just an attempt to make the terrain and light look like the action is taking place on an alien world. I really must get around to making a new terrain set, as the desert table is getting a little boring now! 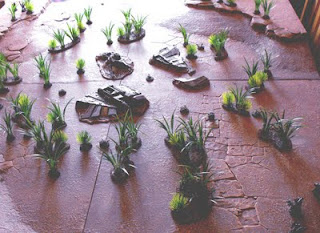 The Mission
We decided that the Exorcists were attempting to recover a valuable relic from a crashed shuttle. The Sensei were simply out to stop them. Not an especially imaginative set-up, but hey, we hadn’t prepared and it seemed appropriate!

Complications
To add some flavour, we took turns placing, one at a time, a bunch of ‘gribbly counters’, representing death world beasts. Each would inflict a single Strength 3 hit on any model that ended its turn within D6 inches.

The Game
We set things up with the shuttle in the centre of the table, and each warband in an opposite corner. The Exorcists advanced, with half of their number providing fire support. As the bolts started flying at my armourless warband I was extremely grateful for the Force Field power – this worked by the Psyker taking a Leadership test every time a model within 2” took a hit, and a pass equalling an Armour save. As the psyker had a Leadership of 8, this saved pretty much every shot (though not all), although the risk of the Psyker rolling a double and transforming into a horrific Daemon that could wipe out my small force in one go was ever present!

As the Exorcists advanced, the Sensei relied on Assail to soften up their enemy for a few turns, but as it was, their power armour saved them time and again. As it turned out, the gribblies did far more damage to the Space Marines than the Sensei did, at least until the Sensei himself got into combat with the Exorcists’ leader, and completely chewed him up!

In the end, it was the weight of the Exorcists’ firepower pinning the Sensei while the Space Marines escaped with the relic that won the day for them. As the Exorcists withdrew with their prize, the Sensei gave chase, but were unable to catch up.

The Exorcists had their relic, though they had lost several of their number to the combined attacks of the Sensei and the jungle beasts. Perhaps next time the Sensei will have to stop the Exorcists using the relic in some nefarious daemonic ritual! 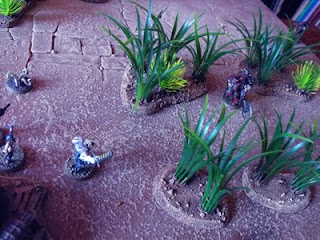 The Exorcists withdraw with the relic - next time!
Posted by Colonel Kane at 13:55 No comments: