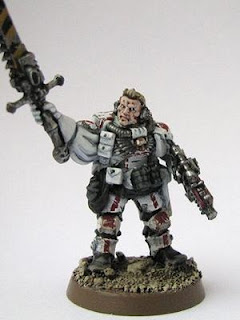 Just finished my Sensei Knight character. I've gone for a bit of a Clone Trooper look with the armour, as I've always liked the style and it looks very different to what you'd normally see in 40k so he's unlikely to be mistaken for an Inquisitor!
Posted by Colonel Kane at 18:21 4 comments:

This is the begining of the gang belonging to Nix Pallidus, a potential Inquisitor. She has a Squat crew on her ship, assisted by a human Enforcer. There are more crew characters to come, in the near future...

Enforcer (to be named)

The Squat crew (to be named)

A WiP suit of Exo Armour, ranged weapons and final details to be added.