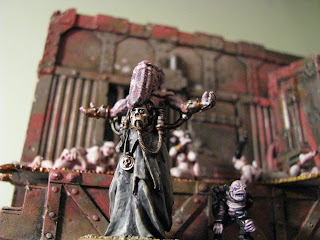 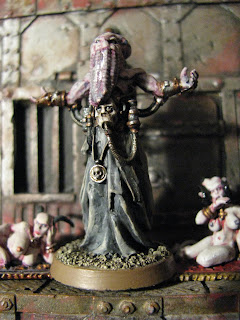 Here's a conversion I made last week. It's an updating on the old Genestealer hybrid/Magus idea. I've gone for a creepier look which I'm pretty pleased with. He'll probably count as a Magus in the campaign, possibly from a new cult drawn from a nearby world?

The body is a Forge World Rogue Psyker and the head is from a Genestealer. The flesh is a 50/50 mix of Citadel Asurmen Blue and Leviathon Purple wash, over a Dheneb Stone basecoat. The hybrid harem behind him consists of Heresy Miniatures Succubus miniatures.
Posted by Colonel Kane at 08:09 1 comment: 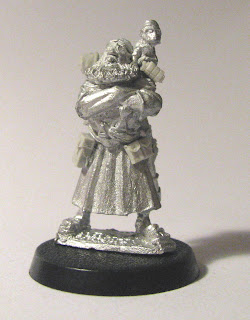 Here's a WIP shot of a character I've been meaning to create in 28mm ever since I first read about him in Rogue Trader - the scoundrel, crook and general lowlife Abdul Goldberg.

The miniature is one of Mark Copplestone's Foundry Darkest Africa, Zanzibari characters, and I've always thought it was one of his finest. I'll be adding more 40k accoutrements but I'm pretty pleased with the grenade monkey!
Posted by Colonel Kane at 08:04 No comments:

The original Sgt Grey model i did is fine but a little too static, as his advances have made him fearsome in close combat I decided to equip him with the powersword we found while searching the armoury (read rare trade roll!)

Patrol Drake – the story so far.

Patrol Drake currently holds the status of an independent, long-range patrol group operating under the direct command of Colonel Kane of the Jeriko Reach Imperial Guard garrison. The group has its origins in the earliest skirmishes of what is fast becoming a major uprising.

These first few battles were fought against renegade members of the Betheljinn hill tribes, generally in defence of an isolated condenser unit or similar low-value target. In many cases it was battle sisters from at the Abbey of the Desert Rose that responded first, their small forces bolstered by garrison troops billeted nearby. Drake fought in several of these early battles, soon coming to the attention of his superiors.

It was in response to the insurgents becoming bolder, attacking into the Mining Enclaves, that Drake was given command of his own section. This unit was still part of the garrison chain of command, forming part of A Company under Major Pholin, but within weeks was detached and given independent patrol status.

Patrol Drake now operates as a fast reaction and long-range reconnaissance force, providing intelligence and first-strike capability to the garrison HQ. Its members are provided with specialised equipment as a priority, having direct access to garrison quartermaster stores and external merchant channels.

While the fight against the insurgents is being fought by all garrison units across a dozen settlements, it is Patrol Drake that is at the sharp end of the action.
Posted by Colonel Kane at 13:56 2 comments: 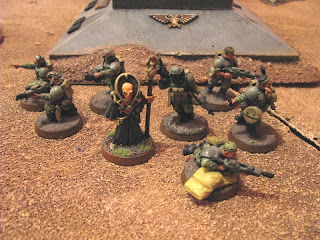 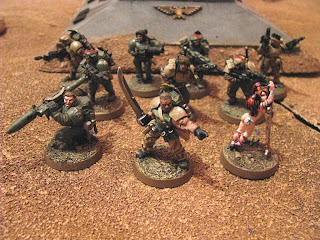 Patrol Drake, accompanied by psykana operative Aeon Gayle.
Following psykana reports detecting an abhorrent presence in Zone D-12, I dispatched Patrol Drake, accompanied by psykana operative Aeon Gayle to investigate. Upon arrival in the zone, Gayle immediately reported a psychic spore closing in on Defence Silo D-12/zz, and Drake ordered those troopers in the immediate vicinity to take up a defensive posture at the silo’s control station while the remainder of his patrol were recalled. Strangely, three of the patrol did not return until long after the coming battle, and appear unable to account for their actions during that time. Commissariat and psykana interrogation pending.

After an hour, the enemy arrived. It was the same traitors of the Iridian 9th, the Swamp Tigers, led once more by the mysterious individual with prodigious psychic powers. Though they had prepared well, taking commanding positions atop the control station, Drake’s men were initially taken by surprise as the enemy worked around the left flank. The opening salvo felled Trooper Zain, who later proved to have died from his injuries, and wounded Specialist Falk.

The enemy pressed the left flank, the NCO believed to be called Sergeant Grey leading them. As Grey and another his men paused in the lee of an outhouse, Aeon Gayle unleashed a psychic attack on them. Grey was temporarily sent mad, spinning around and shouting, and actually shooting the man next to him. As more Swamp Tigers arrived on the scene to press the attack, chaos broke out. A native life form referred to by the garrison as a ‘mousehound’ burst from the stinking outhouse and attacked Sergeant Grey before disappearing once more. One of the Iridians closed on the control station, only to find Drake himself waiting for him. Drake cut the man down with ease and slammed the traitor’s body in to the power feed to the outhouse, which erupted in sparks, killing the Swamp Tiger dead. Unfortunately, Drake’s prised power sword was destroyed in the brief fight.

Meanwhile, the Iridians’ grenade launcher was walking krak grenade shells towards the silo’s master control panel, the destruction of which would have rendered the silo unusable. Worse still, more enemy, including the psyker-leader had appeared on the scene, and were barely held at bay by Lance Corporal Kash and Specialist Kiri, who kept up a steady barrage of smoke grenades. Kash gunned down an enemy trooper at close range, moments before he would have been assaulted.

Back at the control silo, Aeon Gayle unleashed another mental assault on Grey, sending him into a mad rage. He then engaged Drake in all-in combat, knocking him out before moving on to assault the master control panel, which he wrecked in a furious attack. At the last, the remainder of Patrol Drake arrived and opened fire on Grey. Realising he was surrounded, the traitor dove for Aeon Gayle, grabbing her from her hiding place. He then used her body as a human shield, backing away from the approaching troops. The Aeon’s powers deserted her, and Grey escaped, throwing the Aeon to the ground as he made good his escape.

It appears the enemy were guided in their flanking move by turncoat Betheljinn tribesmen, and that a more general uprising is imminent. All garrison units standing by for widespread uprising.
The Emperor Protects.
Colonel Kane, Jeriko Reach garrison battle group. 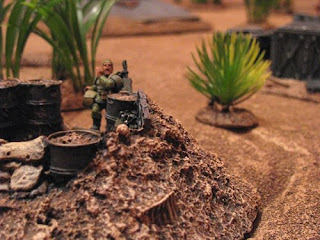 The Iridian attackers close in. 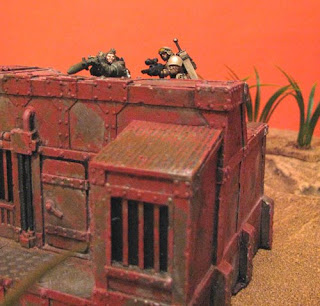 Trooper Zain and Specialist Falk atop the silo command building. 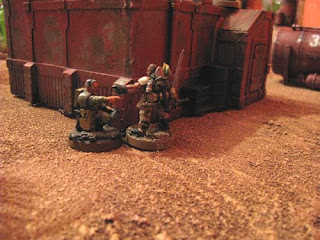 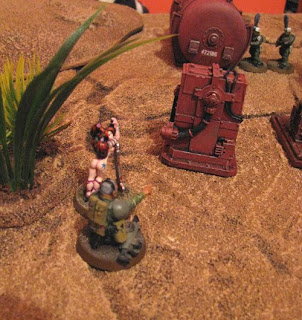 Grey withdraws having destroyed the master control, using the Aeon as a human shield!
Posted by Colonel Kane at 08:13 6 comments:

The Iridian Rangers 9th were posted to Jeriko Reach a few years back as a ‘quiet’ posting and a reward for their long and hard fought service on the deathworld of Hang Sung during the Shikani Uprising.
The regiment, natives of a lush& verdant feral jungle world, had been originally sent to Hang Sung to put down a genestealer uprising.
Suffering initial heavy losses the regiment soon learnt to excel in jungle and night fighting and successfully destroyed the outbreak.
In one action the much decorated Cpt. Coppola led the regiments 3rd company in a viscous guerrilla action in the Chaing Hai methane swamps of the Tsai Chi province and earned the third company the nickname ‘Swamp Tigers’ due to their savagery in the fetid waters of the delta.
Coppola earned himself an Amethyst Aquila when he led the company’s ‘green men’ (so called because of their camouflage painted bodies) into the heart of a stealer tunnel complex to assassinate its Patriarch. Coppola is believed to have been the only survivor.
On return from the campaign all members of the regiment were screened and tested for genetic abnormalities (resulting in a 12 per cent cull of infected personnel) and declared fit for further active service.

One can only wonder if screening processes and summary cull were not stringent enough, did some of Coppola's men bring in an infection? Furthermore Imperial scholars question Coppola's hazy recollection of his return to Imperial lines, he was found delirious with mara-fly fever some distance from the tunnel complex which he had destroyed with melta bombs. 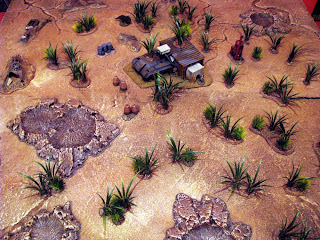 Having regrouped at Garrison HQ, Corporal Drake’s patrol was sent out into the Alkatine Groves to conduct a sweep of the many small settlements skirting the death zones. What he encountered has far reaching and disturbing consequences for the garrison, and potentially for Imperial rule on the Reach.

Whilst approaching a tumbledown shack known to be occupied by an unstable old squat engineer, Patrol Drake encountered another garrison unit, a patrol under Sergeant Grey of the 9th Iridian Rangers (The Swamp Tigers), another unit of the Jeriko Reach Garrison, that had been billeted in a number of settlements thereabouts.

Before he could approach Grey, Drake’s patrol was fired upon. Clearly, we have lost Grey and his men. The traitors were led by the same leader we have observed in the past, an individual of prodigious psychic potential. It was fortunate then that Drake was accompanied by an Adept of the Telepathica, Gramatrix Apphia, to provide some psionic punch.

Upon contact a firefight soon developed. Drake positioned his missile and grenade launcher along with a sniper and the Gramatrix to his left flank in order to fix the bulk of the enemy, and led a flanking party in a wide sweep to the right. This took him right past the old shack, and the party found itself fired upon by the irascible occupant. Trooper Kleve was winged but not wounded by the shot, and the troopers did very well to restrain themselves and not fire back.

A moment later Swamp Tiger fire set off a pocket of previously undetected Nauka gas, enveloping three of the the traitor troopers in an explosion, though none were injured.

Meanwhile, Trooper Falk’s missile launcher misfired and the sniper, Trooper Zain was wounded, and out of the fight. The Gramatrix inflicted a psionic attack upon a traitor before she herself was put down. Falk later reported that Apphia displayed very poor fieldcraft, and it has been noted that future battlefield attachments from the Psykana must be better trained and prepared.

On the right flank, the flanking party found themselves under sustained psionic attack by the enemy leader, who appeared to be attempting to take control of the minds of Drake’s men. Fortunately he was not successful, though his attacks were a constant drain. Trooper Kleve was once more winged, this time by a poorly, even negligently aimed shot from Trooper Serik, who is on report as we speak. Trooper Tyrik was wounded by Swamp Tiger fire, but was attended by Medic Reko and was soon back in the fight. At the last, Drake’s party assaulted the enemy position from the lee of the shack. The attack descended into a hand-to-hand affair in which Drake was wounded in combat with Sergeant Grey.

After Drake went down, Trooper Kash took control, leading the troopers in a final push which saw off the traitors. Kash has received a field brevet of Lance Corporal for his efforts. After the action, Jawar Rajiv, a native defence volunteer attached to the patrol was found incapacitated. Though he recovered, he appears mentally scarred by some experience he will not, or cannot relate.

It appears an uprising is beginning on Jeriko Reach, and units of the Garrison have turned coat. All units are now on full alert. 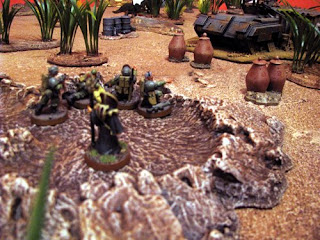 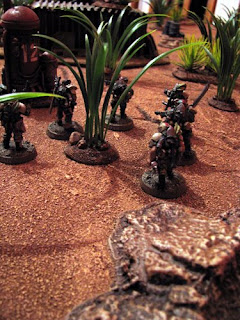 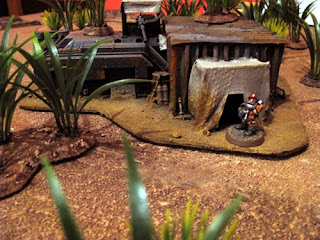 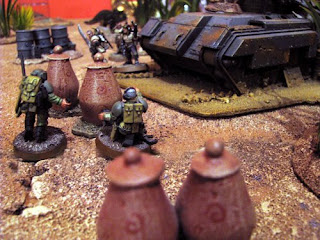 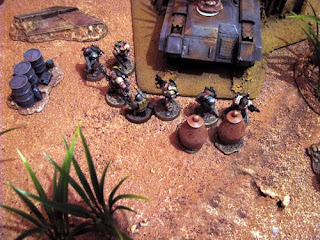 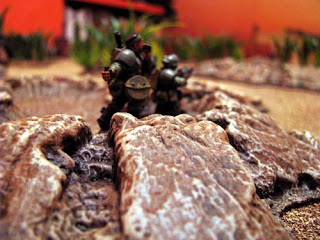 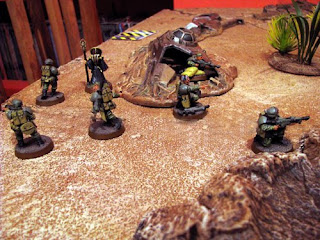