I've been trying to assemble all the old minis I had (and later sold) in the 80s as part of a bit of a nostalgia trip/rogue trader project. I've bitterly regretted selling some of the stuff i used to have thats cost me loads to buy back again (not to mention priceless one offs like the 'orgus flyer').

So i was pretty much amazed when an old uni days house mate said he'd found a load of my models during a clear out and 'did i want them back?'

Well they're a bit battered and chipped and the assault squad have since been 'converted' to all have power swords (damn 2nd ed lists) but it was weird recieving in the post minis i'd painted when i was 15.

Even better still I had a landraider and judge dredd bike that were not originally mine anyway lumped into the package!

Quite a bit of repair and repaint to do (althought i'm tempted to leave a few of the duplicates as the are for the sake of it) and the landraider is missing a few bits...

So anyone got a trashed original landraider they can spare a top hatch and an exhaust off? (i can probably source the HB bolters off plastic squat ones and wire) 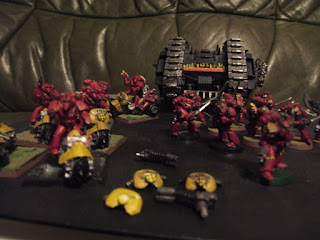 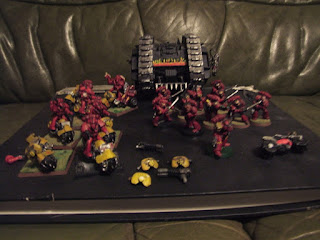 A departure... to the ends of Nu-Earth

Well, again a quiet month (i've got a Fallout LARP event run that is taking up nearly every spare moment...) and we've all found it tricky to find the time to get together - the fortnightly Rogue Trader and D&D RPG sessions have been particularl hit hard.

Having assembled a mighty fou of us this week we were still a man down for the D&D campaign and so opted for a bit of a board games evening.

I'd been itching to play the Rogue Trooper game for some time, I bought in the late 80s and played it a *lot* with school friends but it not been touched for over 20 years and really deserved a spin.

So I was more than happy when the chaps agreed to play.

Set up took some time as we all had to skim read the rules, i'll say one thing rulebook layout has come a hell of a long way in 20 years as the booklet is a bit hard to find rules in quickly and one can't help but feel that while the 6 pages of Rogue Trooper comic at the start are really atmospheric they do cause the remaining pages of text to be unnecessariy cramped together. A collective letter to Mr Halliwell and Mr Johnson was considered but quickly scrapped as it's not like they could do anything about it :)

That said after the first couple of hesitant turns the game flowed fairly quickly and we soon appreciated some of the subtleties of the rules... in particular 'rogue'cards that can be played upon another player to snatch victory from his hands at the last moment - nicely echoing Rogues myriad frustrations in the comic.

All the players were plagued with ammo supply problems (i myself spent a whole three turns in a armoury in the hope of drawing some decent cards to help me across the mega minefield!) and it turned out to be the end of Owen. Not to worry though as in the spirit of the strip Andys GI was able to recover Owens still warm corpse, slot the bio chips into his equipment and the guys then played on as a team.

Graham was next to bite the bullet in the search for the traitor and eventually Andy and I, laden with dead players bio chips, faced down the traitor on the bridge of millicom. A slghtly daft combat ensued that saw us fight a few rounds, dash to the armoury to reload and then dive back in again (we'd missed the bit in the rules that said fights on milli com were settled with fists!). After some dicy moments the traitor was defeated and the GIs avenged.

All in all a fun game, the game itself is showing its age and I really dont think it would have been as much fun if we were not all great fans of the comic strip. In fact that one of the reasons i think the episode printed in the rulebook is doubly redundant... if you've bought the game the odds are you were a big 2000ad fan. I can't see many people buying it as a random purchase at the time.

We're going to give it another go (with the benefit of having the time to fully dgiest the rules) in a few weeks and hopefully it will be even more fun.

One or two pics here, its not the most exciting game in the world to look at but I did try and liven it up by using the Citadel Rogue Trooper range of miniatures for the players and the traitor general. 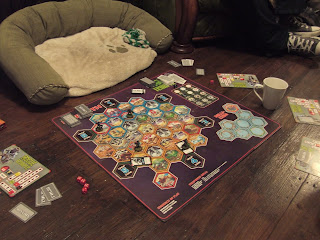 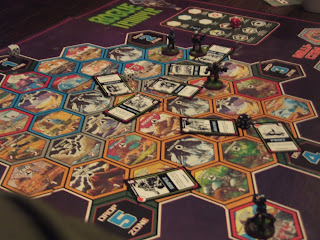