For this game, we used the Rogue Trader rules pretty much ‘out of the box’, (though both players decided to use Overwatch a few turns in, which isn’t technically from the core rules as this rule appeared later on in the White Dwarf Compilation. In addition, we used the vehicle rules from the Warhammer 40,000 Compendium. 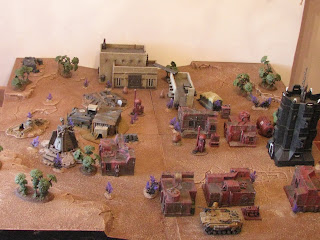 The field of battle
The game was handled almost exactly as Rogue Trader was designed to play, with the GM (me) designing both sides, providing the miniatures, briefing the players and the likes. I made up each side to around 300 points, then allowed the players to add additional equipment to take the total up to 500 points each. Both choose make up a vehicle. 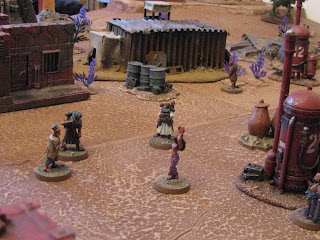 Civilians going about their business 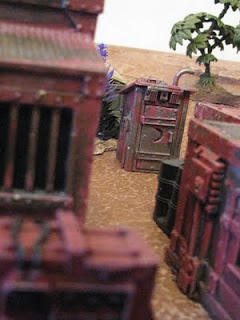 Giovanni Clemp's cunning hiding place
The idea of the scenario was that the Adeptus Arbites have recently established a Bastion-Precinct on Jeriko Reach. Local anti-Imperium elements aren’t happy about this, and set up an ambush. The Arbites are tipped off that the wanted rabid interplanetary bankrobber Giovanni Clemp is hiding out the settlement, and in response they initiate a house-to-house search. At this point, the rebels, with xenos mercenary hired-help, launch their attack.

The Arbites player was briefed in secret that his objective (Giovanni Clemp) is hiding inside one building on the tabletop, and he must locate him and get him back to the Bastion-Precinct to win. The player could set up his Arbites anywhere on the table he wanted.

The rebel player was briefed in secret that he could place his Smoggers (the xenos mercs) inside one building, and they would be Hidden until revealed. His rebels could enter play later on by any table edge. To win, he had to wipe out or seriously defeat the patrol.

The Arbites deployed more or less in the open, in a single group supported by their tank. The Smoggers were hidden in the building right in front of them, so it was clear things were going to kick off straight away. 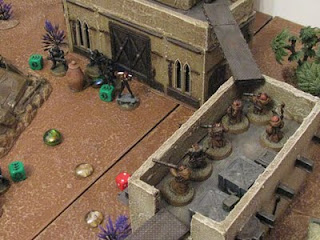 The Smoggers unleash their ambush on the Adeptus Arbites patrol
As the Arbites advanced through the settlement, the Smoggers revealed themselves and threw their rad grenades into the street. One judge and a civilian were killed in the opening salvo, and fortunately the rest made it clear in their turn. The strength and range of rad grenades is kept secret in Rogue Trader (unless a character has a rad counter) and so the GM took charge of their effects. 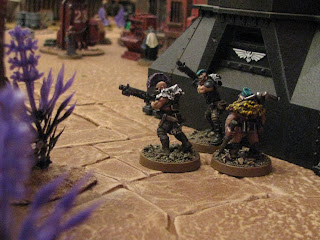 The techno-savages infiltrate the settlement 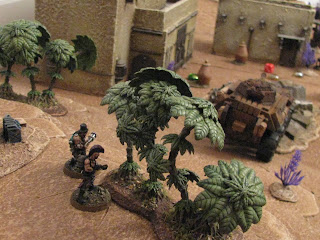 Battle is joined
A firefight broke out in the centre, and several of the Smoggers were gunned down. Their Shaman decided that discretion was the better part of valour and used his Teleport psychic power to redeploy to the top of the Bastion-Precinct. 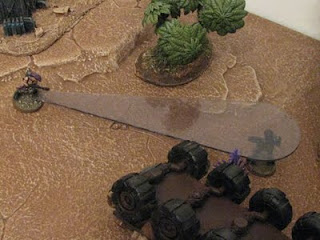 Flamed
Meanwhile, the rebels started to deploy, coming on in three small groups on three sides of the table. One rebel was attacked by a Imperial civilian (a nun no less) though the rebel made short work of her... 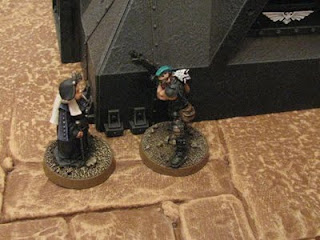 A nun gives a rebel a piece of her mind
Most of the Smoggers had been wiped out by the guns of the Arbites tank, and so the rebels decided they had to deal with the vehicle. They had only one weapon that could deal with it, and this was a (one use) vortex grenade! This was thrown, and missed the target, but the scatter brought it back to clip the tank’s front. Though just a glancing hit, the damage was sufficient to wreck the vehicle’s drive train and flip it over, taking it out of the battle. In the next turn, the vortex grenade expanded to three times its initial size, then disappeared, leaving a smoking crater behind. 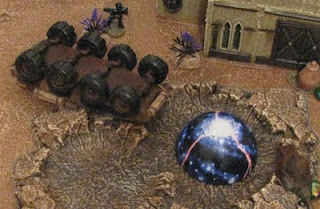 Tank vs vortex grenade
Meanwhile, the rebels’ flamer was causing havoc, but was eventually silenced by the Arbites Psyker agent using her Jinx power to snarl its mechanism. She went on to do the same with several more rad grenades thrown by the surviving Smoggers, though she took several wounds in the process. 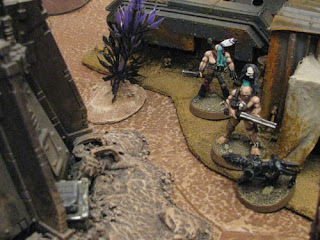 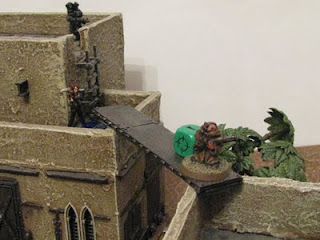 Battle across the roof tops
In the centre of the settlement, a major scrap broke out, which lasted throughout the battle and saw several of both sides fall. The Arbites just about had the edge. 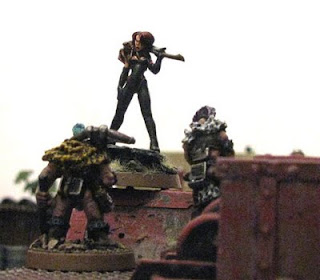 The final confrontation
The battle was ultimately decided when the Arbites Psyker agent saw the rebel leader swaggering into town like he owned the place. Using her Teleport psychic power to charge right across the table, she engaged the leader in close combat. The rebel leader was fresh to the fight however, while the psyker agent had already taken two wounds during the fight, and she was struck down. At that point, the last couple of remaining Arbites disengaged, and the rebels swept into town.

All in all, everyone seemed to enjoy the game. As a GM, I failed the Arbites player a bit, in that his mission was really impractical with the small, elite force he had. So at the end of the game Giovanno Clemp the rabid interplanetary bankrobber was still cowering in his hiding place and the rebel techno-savages had driven the Arbites from town. Plenty of ideas for the next game there…
Posted by Colonel Kane at 16:31 25 comments:

Just a quick question for all the old school skirmish vets - the game of Rogue Trader we played this week (full report to follow when I have an hour to type it up!) was interesting, in that the sort of rules and game we were playing occassionally called for more detail than Rogue Trader can provide, but still looked great with 10-20 models per side (about 500 points including a vehicle each). This got me thinking about using the Inquisitor rules (with 28mm miniatures) to better play the actions of the heroes, but as we all know, that ruleset is best suited to 3-5 miniatures per side, which isn't the sort of game we're often after.

It occured to me that there might be a compromise, and I wondered if anyone else has tried it. Has anyone written a set of house rules that allow the fielding of hordes of lowly 'mooks' in Inquisitor, leaving all the detailed rules to the 'stars'? Fantasy Flight Games' Deathwatch RPG does this, allowing the players to command 'Hordes' of NPCs against the enemy (who may be Hordes or NPCs too).

If not, maybe I'll have a go. That way, we could try a game where the heroes get to be heroes, and the red shirts do what they do best too!
Posted by Colonel Kane at 18:50 7 comments: 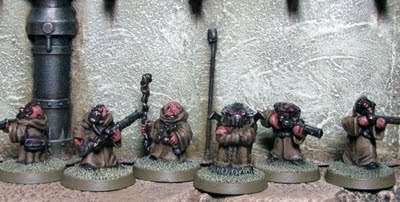 I ordered myself a little treat this week in the form of a set of Smoggers from Moonfleet Miniatures (via Black Cat Bases). I plan to use these as Jawa-type scavengers in our Rogue Trader games, as I imagine the scum and villains living on the Imperium's frontier worlds would tolerate the pressence such xenos. Hopefully we'll be playing a game next week, and I'm cooking up an interesting scenario involving these guys.
Posted by Colonel Kane at 20:55 6 comments:

Just finished off a bunch of classic miniatures from the early-mid '90s, in the form of Mark Copplestone's Future Warriors Techno Savage. These miniatures were part of a larger range Mark released, all of which feel to me very much part of the old school wargaming ouvre. To me, they fit right into the old Citadel Rogue Trader range, so I've almost meant to get hold of some and include them in our campaign. The range is still available, and at very reasonable price, from EM4 Miniatures, and I intend to get the whole lot in time! 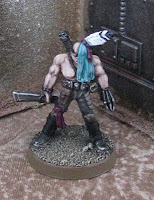 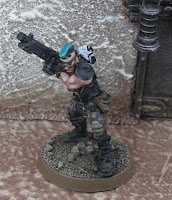 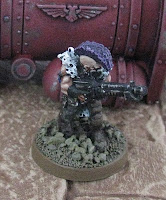 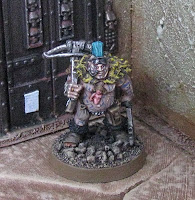 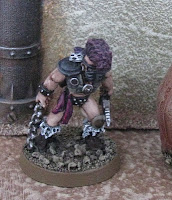 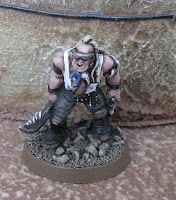 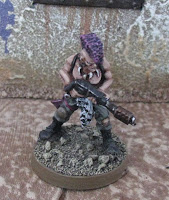 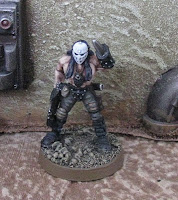 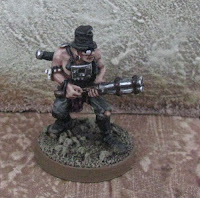 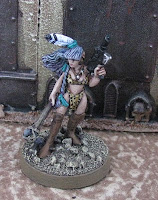