Regarding the disappearance of the Archo Logist Clara Toft on the planet#DELETED#, in system Intelligence pict feeds have picked up the presence of two disconcerting anomalies. The first is the presence of a chaos cult which appears to be lead by an #DELETED# Marine whose intentions cannot be good for this system. The second being the presence of a Tyranid #DELETED# which can only mean that the Vanguard of a possible #DELETED# is on its way, possibly due to the ongoing #DELETED# on Jeriko Reach.

From what we have seen on the remarkably clear picts are Adept Tofts guards encountering the Warband from the East, and being entirely ineffective. Adept Toft is seen entering the Western most of the two domes, and being initially ignored by the #DELETED# Marine leader who entered the East dome. It is at this point that one of the anomalous auspex readings coalesced into the form of a #DELETED# which immediately took out two of the cultists before disappearing into the dome the #DELETED# Marine had gone into.

This left the cultists in some shock, but after a short time one of them was observed entering the second dome and out of sight. This was shortly followed by the emergence of the now injured #DELETED#, which sprinted to the West dome. Not fast enough to avoid fire from the cultists, who had crowded around the East entrance awaiting the emergence of their leader. This resulted in more visible injuries to the #DELETED#, even as it raced into the second dome.

It would appear that Adept Toft was captured as she raced from the West dome as the Cultists morale broke and they started to fall back. Perhaps sensing weakness the #DELETED# charged out of the dome, and straight into a solid wall of fire which left it writhing on the ground. This allowed the cultist to collect their wounded and retreat in good order. Some time later the #DELETED# was seen to move off, and out of pict range.

My Lord, this presents two new threats to #DELETED#, and this station is already feeling the effects with transmissions reduced to 57% efficiency. The presence of such forces as

#FURTHER TEXT TOO GARBLED TO RECONSTRUCT# 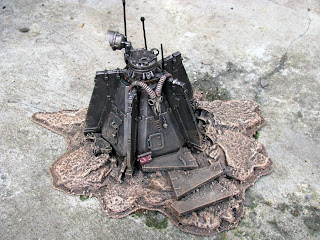 This is a piece of terrain I finished a week or two back. It represents a scavenger hab out in the wastes, made from the wreck of a Space Marine Drop Pod. The idea is there's a mass drop site from the war, scattered with wreckage, and the wasteland savages have moved in. To make it look like the scavenged drop pod is left over from a botched drop, its mounted in a crater.
I added lots of bits a pieces from my bits box (as well as trading bits with other people). The skull over the hatch is from the Ogre Kingdoms set, making it appear that a bunch of savage scavengers have moved in.
If I can get enough parts together I plan to make a small settlement of these, as if the scavengers have moved in on the site of a whole drop which went very wrong. The settlement would have to be called...wait for it...Bad Landing!
Posted by Colonel Kane at 14:04 5 comments: 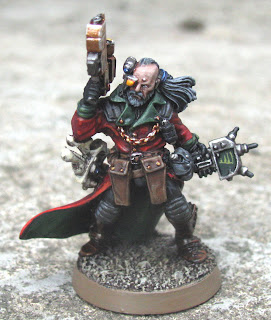 This is a conversin I've had in mind for quite a while and I've just finished. It's a character for the campaign, representing a Rogue Trader. The model is based around the Kal Jericho miniature, with the head from Sergent Telion, right arm from the Macragge pilot, left arm from a Space Marine and various other bits and pieces.

We played another game last week, which I GM’d, so I’ll describe it out of character. The uprising is gathering pace, and the ‘stealer infection rate on Jeriko Reach is reaching critical mass. All of the psychic background noise generated by this caused one of the few Astropaths on the world to go mad, and he ran off into the wastes clutching his head, his only desire to shut out the chittering that haunted his every waking hour. 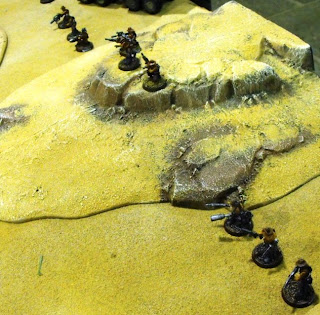 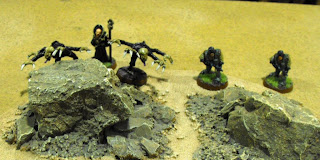 Captain Jack took his Henrie Boys gang (around 2000 Necromunda gang rating’s worth of guys, counting as Van Saars). The Pontiff took the same value in Genestealer Cultists, using the Underhive Bestiary in the Outlanders book. He took a Magus, three Purestrains and around eight Brood Brothers.

I briefed each player secretly. I told Captain Jack that his contacts at the Imperial Mining Concern had passed on the info about the missing Astropath, stating that the Guard Garrison was out in force looking for him, but looking in the wrong place. If he could recover him, the Garrison would surely pay a high reward.

I briefed the Pontiff that the Uprising had heard of the missing Astropath too – just think what they could do to/with an Astropath!

So I made a piece of terrain to represent a deserted wasteland scavenger hut in which the Astropath would hole up. Unknown to the players, he’d be accompanied by a Squat bodyguard. The scenario was built around a Necromunda Gangfight, with the added objectives above. The Astropath had the Mental Assault Wyrd power, which he would ise every turn on the nearest model, from inside the hut. The gangs would have to take him down in close combat and carry him away in order to win.

The game started out with the Purestrains going crazy, as they always do! Even one Purestrain is an absolute tank in Necromunda, so three were pretty hardcore. After a couple of turns of carnage the Henrie Boys managed to get some payback as their shooting took its toll.

And then something entirely unexpected happened. The Astropath rolled a double 1 on his psychic test and was subsequently possessed by the daemon! I hadn’t planned for that, but that’s why you have GMs I guess. A kind observer lent me a Skaven model and a hideous rat-like fiend from the Warp erupted from the hut intent upon rending the flesh of every living thing within reach. It was closely followed by a fleeing Squat bodyguard, who I decided had not been paid enough to see his employer turn into a daemon before his very eyes! The Henrie Boys had been closing on the hut and knew they had just one chance to escape with their lives. Everything opened up on the daemon, causing six wounds, but incredibly only knocking it down.

At the that point, the cultists decided discretion was the best tactic and failed a bottle test, instigating a withdrawal (we always disengage when a gang fails a bottle test, we don’t just stop the game and pack up!). As the cult fought its way clear the Henrie Boys opened up on the daemon once again – if they didn’t, it would be up and undoubtedly tearing them apart. Fortunately for the gang, they disintegrated it, sending it back to the warp from whence it came. 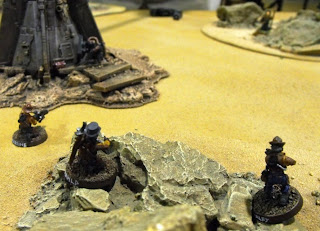 The daemon emerges - the Henrie Boys have just one chance!
Posted by Colonel Kane at 08:31 2 comments:

Well, the Henrie Boys have some wheels and quite fitting too. I've finally got this finished after some time waiting for the final touches. 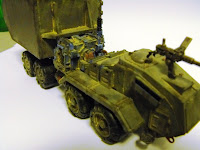 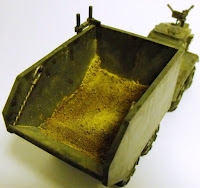