Sensei vs Space Slann Rogue Trader Battle Report (or "someday we will find, the planets of gold..."

Myself and Gadge played an impromptu game of Rogue Trader last week, and while it wasn't really planned out we had a great time and managed to take a few pictures along the way. We haven't published a battle report on Tales from the Maelstrom for far too long, so we thought we'd write this one up. Hopefully next time we'll plan things better and have even more to show, but for now, here's the latest tale...

The Story
For centuries, Rogue Traders and other outcasts have dreamed of locating the remnants of the once-mighty Slann Empire, the survivors of which are scattered across the galaxy, and in many cases, beyond it. Of late, tales of a surviving Slann enclave have reached the ears of several Rogue Traders, as well as other interested parties. The enclave is said to lie in the globular cluster long marked on the most ancient of stellar almanacs as '47-Tucanae', a dense, isolated concentration of ancient stars 17,000 light years from Terra entirely separate from the galactic disk. No stable warp route is known to exist connecting the galaxy to 47-Tucanae, although many bold Navigators have given their lives attempting to chart one. Of late however, tales of such a route have emerged, and the race to acquire the data, and to follow the route to a region of space said to be strewn with undreamed-of riches, is well and truly underway.

Many now hunt the 47-Tucanae Passage, but this battle report will focus on the efforts of one Malek Saam, a figure many hold to be one of the nigh legendary 'Sensei' (though many more claim he is suffering from a chronic bout of MACS) and his henchmen Lorus Bizon and Slopey Finnigan. This band have arranged a trade with the outcast Eldar Prince Ymrik Starfire and his companion, the Warlock Yael Moondance. The Eldar claim to know the location of a cache of ancient scrolls describing the 47-Tucanae Passage.

As the Sensei and Eldar warbands close in upon the cache however, a Slann warband dispatched by the Great Mages to recover the scrolls and stop the imminent intrusion on the Slann enclave appear. And thus the action begins...

The Forces
As this was very much an impromptu game, we used our best judgement to approximate our forces. Gadge rolled up a Sensei Warband from Realms of Chaos, which consisted of a Sensei Minor Hero and two Champions, which he armed according to the miniatures. The Eldar part of the force consisted of an Eldar minor hero, a Warlock, a bodyguard and two Ghost Warriors (an assassin class and an executioner class).

For the Space Slann, I took my entire collection (just 12 models, but that's quite a big collection for Space Slann!) and armed them according to the models (mostly las pistols, lasguns, needle pistols and a single lascannon). Commander Xix would be a major hero, and Quinletz would be a level 1 psyker. We weren't worried about points values and used our judgement to balance forces - technically Gadge's force was quite a lot up on mine but a lot of the gear the Ghost Warriors receive as standard is highly situational so we weren't too worried.

The Scenario
We set up a jungle themed table, with a pile of scrolls as the objective in the center. As I have lots of spiky cactus type plants we decided it would be fun to use the rules for Spikers given in the Deathworld bestiary section of Rogue Trader. These shoot at any living creature that approaches within 6" and there's a chance that the victim will be turned into one himself as a result of the poison, which sounded too entertaining not to include. We decided that both forces would deploy up to 6" onto the table and that their objective was to escape with the scrolls, which would cost the carrying model 1" of their movement.

The Battle
I won't post a detailed break down of events, as pictures and highlights are generally far more entertaining. Broadly speaking, the Eldar Ghost Warriors were on the objective very quickly, their numerous wargear and skills meaning they could hide from the Slanns' fire and ambush them when they reached the scrolls. The Sensei took up a flanking position on Gadge's right while the Eldar did the same on his left. Meanwhile, Commander Xix led the bulk of the Slann straight at the target while one of their number covered the advance with his lascannon. Meanwhile, Quinlitz pushed up towards the Eldar to engage them with his psychic powers.

Highlights
The Eldar Warlock being las-cannoned (it was the only shot the firer hit with all game!)The Ghost Warriors hiding on the rock then ambushing the Slann with a flamer (three kills) and shurikan catapult (no hits).A Ghost Warrior charging into combat, but being taken down by superior numbers of Slann.
The Slann mage Quinlitz using his pyschic powers to devastate the Eldar Prince but failing to kill his bodyguard, moving too close he was wounded by a Spiker Plant, and then a turn later turned into one!The Eldar bodyguard being immunised against poison by one of the Warlock's psychic powers and oddly avoiding the fire of dozens of spore plants.The Result
Once the Eldar had thinned out the Slann it seemed their victory was assured, but then the Warlock was lost and all of a sudden the Slann had the upper hand. As two Slann warriors made off with the scrolls the Sensei charged in with his warband providing covering fire. A bitter hand to hand fight between leaders ensued but the Sensei had the upper hand thanks to his ability to channel the power of the Star Child. At the very last, Commander Xix was near the table edge but with the Sensei and his warband closing was forced to hand the scrolls to another warrior and turn to engage them. He was struck down and while the surviving Slann made a gallant last effort to escape, he too was cut down.

The secret of the 47-Tucanae Passage is now out, and the race to find the Slann treasure worlds begun! 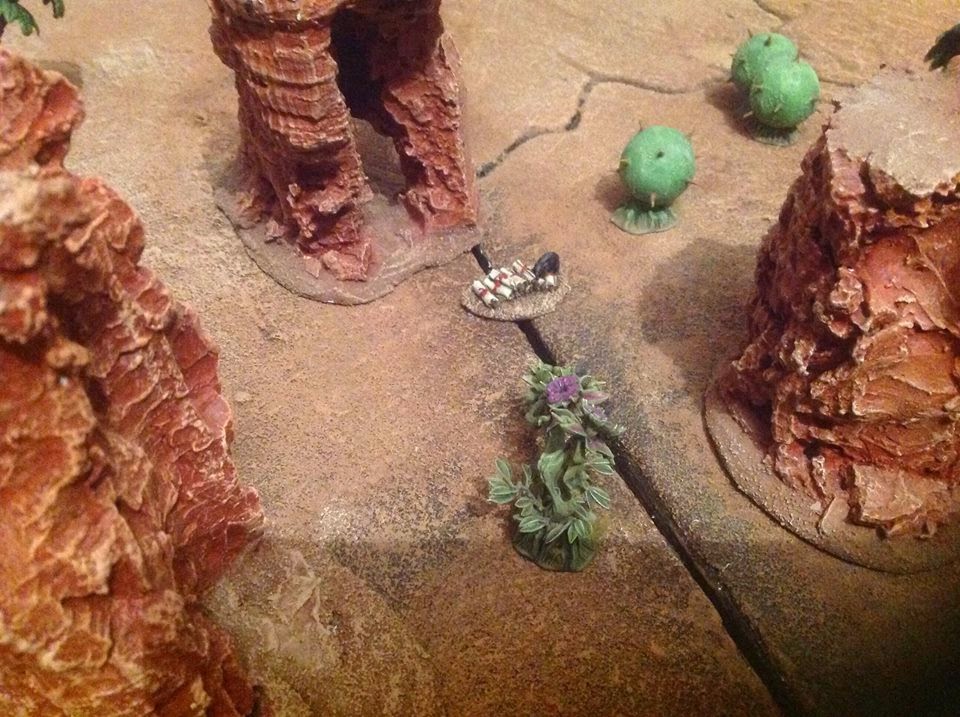 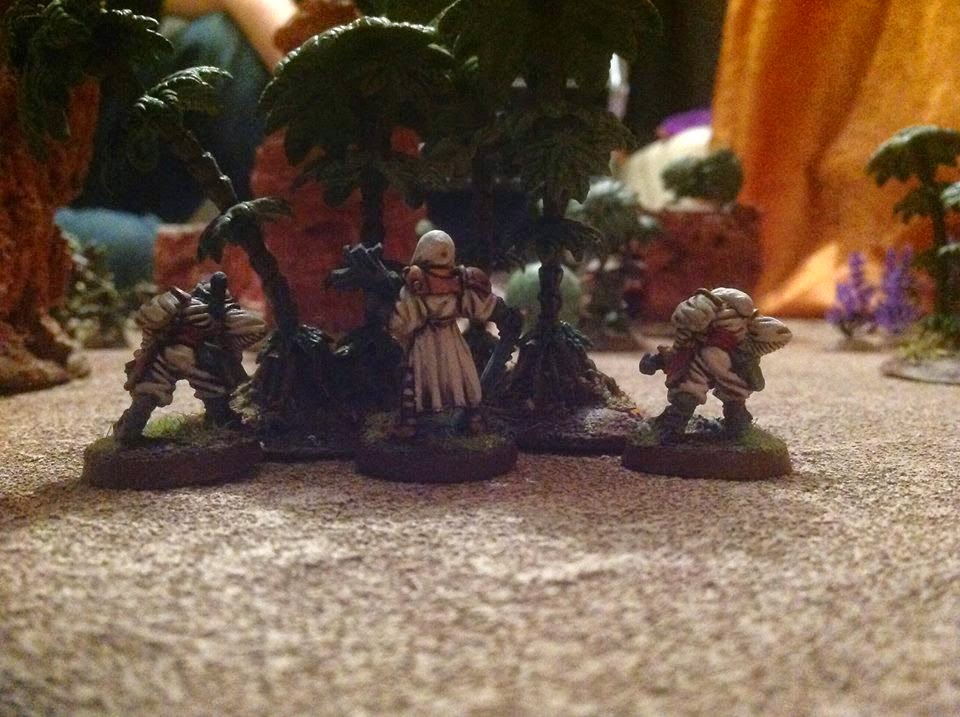 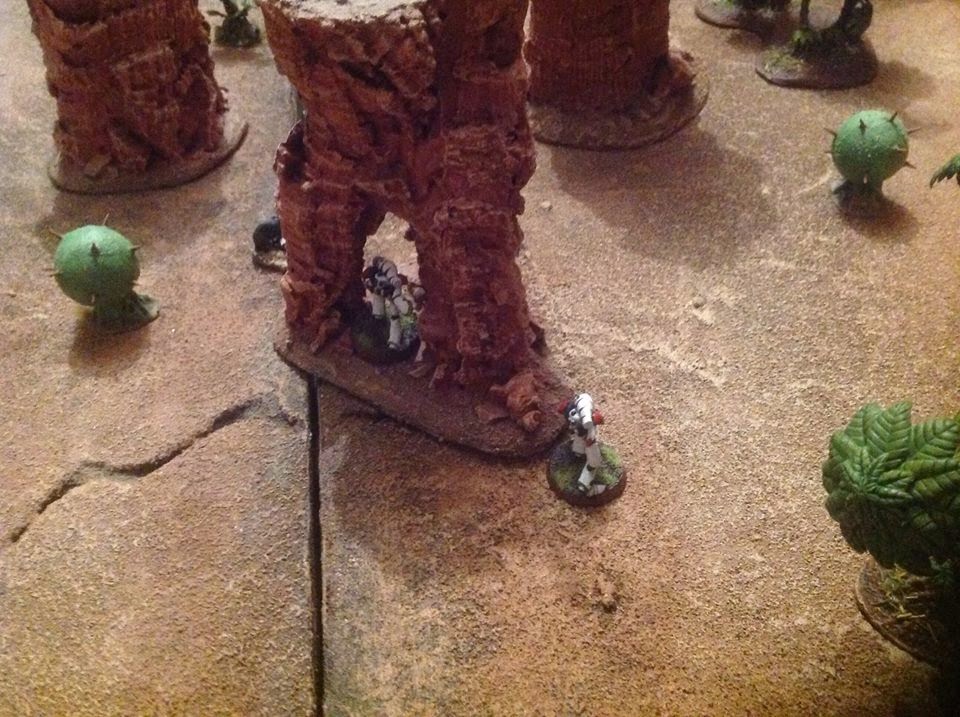 The Ghost Warriors hide among the rocks. Their skills and gear make them untargetable, forcing the Slann to advance on them. 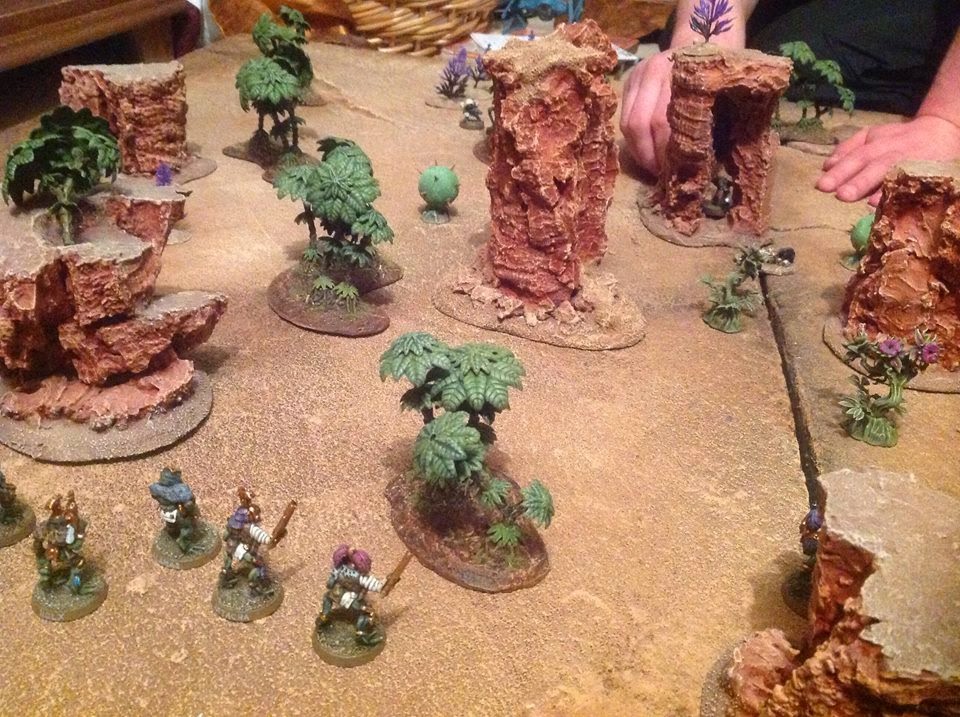 Commander Xix leads the Slann forward in two groups, leaving one with a lascannon to climb the rock on the right and the mage Quinlitz to advance on the extreme right flank. 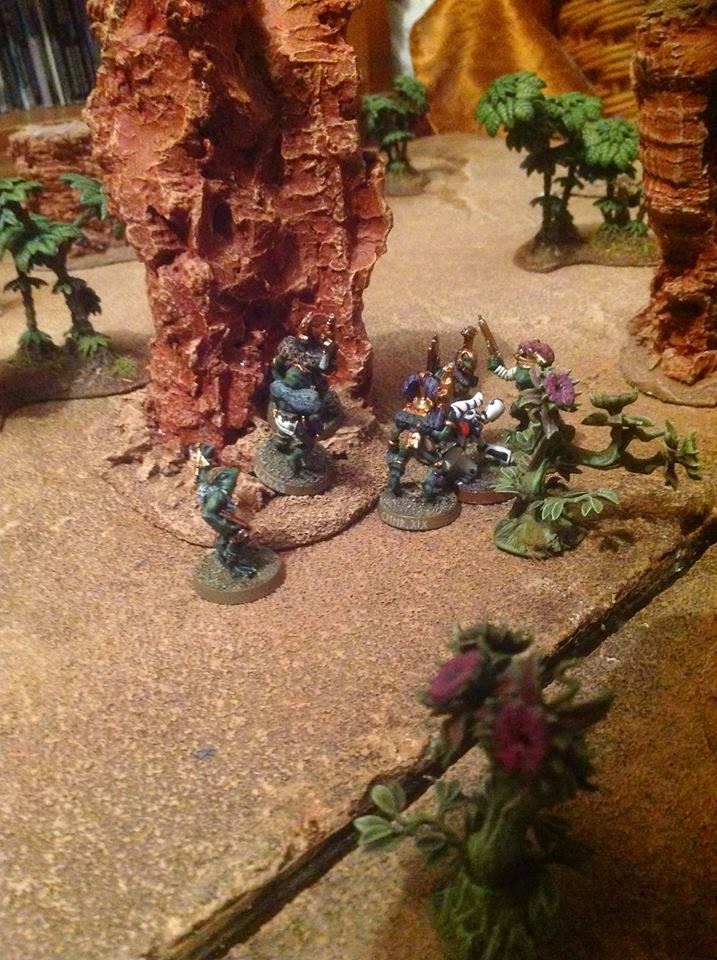 Having shot one Ghost Warrior from his perch atop the rock spire, the Slann force the other to charge them, Commander Xix striking the killing blow. 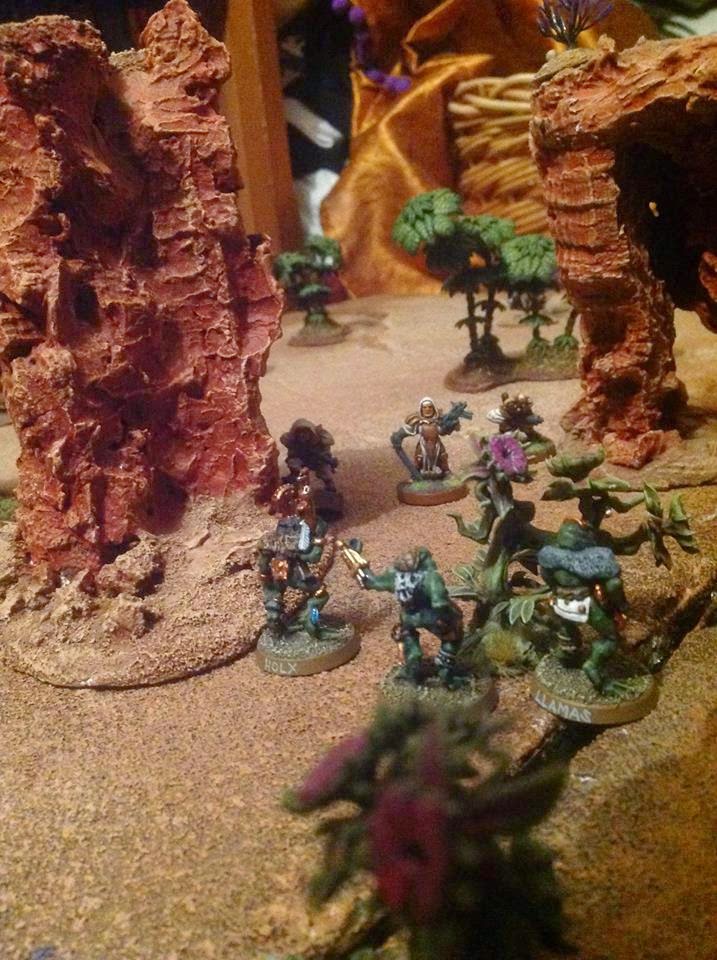 The Sensei time their counter-attack well, as the Slann begin a fighting withdrawal with the scrolls. 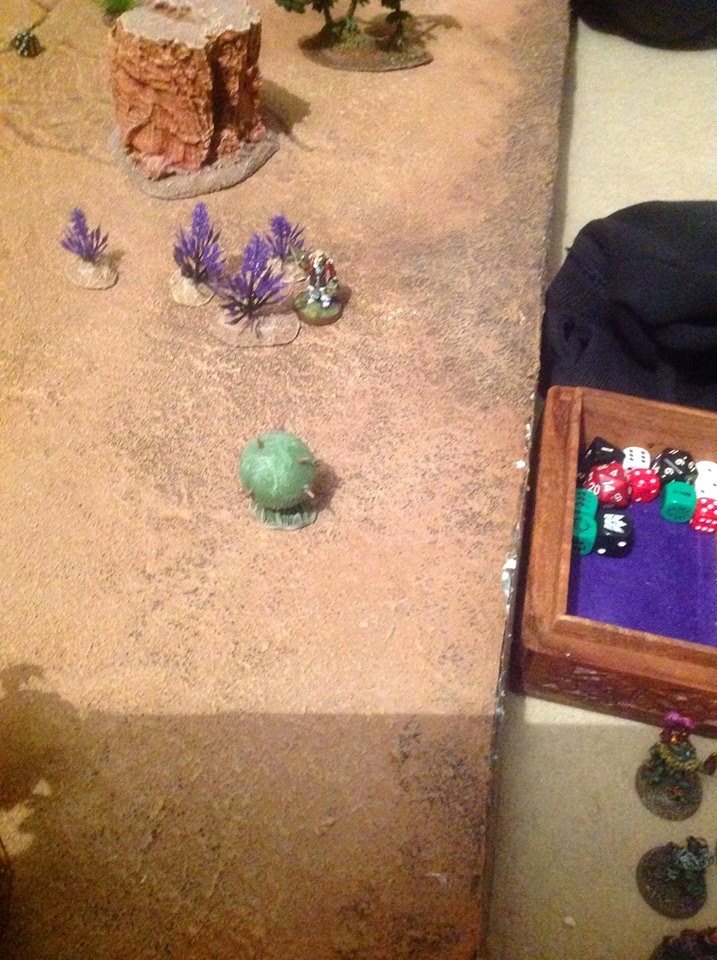 Meanwhile on the right flank, the Eldar have been whittled down to just their bodyguard, but the Slann mage Quinlitz was struck by a Spiker sting and two turns later turned into one himself just as he was bearing down on the last Eldar! 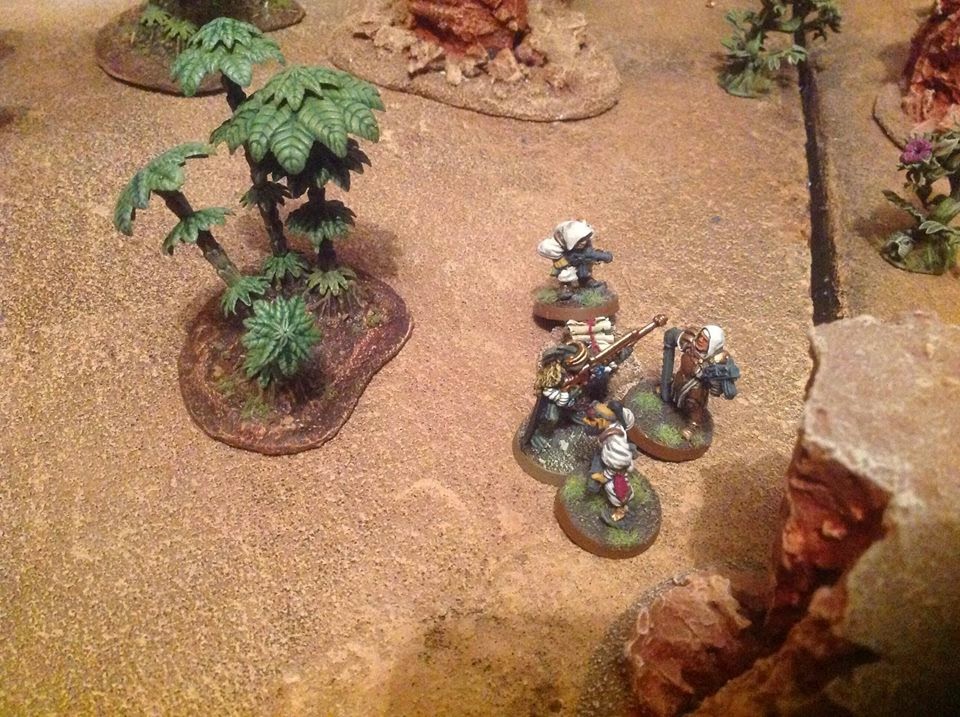 Last stand as the lone Slann sniper attempts to withdraw with the scrolls but is overwhelmed by the vengeful Sensei warband.
Next Time...
So then, a victory to the Sensei warband, albeit a close one! Now the humans have the coordinates to the 47-Tucanae globular cluster we can get a small campaign running bringing in various factions all looking to get their hands on the Slann gold... 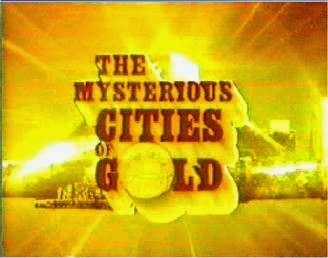 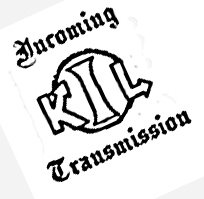 This months issue of Miniature Wargames has a column about the 'Oldhammer' movement,  i.e. veteran gamers enjoying earlier editions and miniature ranges. The article refers to several blogs run by people I'm friends with and whose hobby efforts I respect enormously, so it's great to see them recognised. The column even mentions this very blog, which is really nice as we've been running it since early 2008, some time before the (highly appropriate) term 'Oldhammer' was even coined!

I encourage anyone to check out the blogs the article references and I think they're really well chosen. They nicely illustrate the range of interests within the very broadly defined movement, and in particular puts a lie to a common misconception that all players of older editions are grumpy old gits stuck in 1989! In fact, we take our inspiration (and our conversion components!) from many eras and it's the spirit of those early editions and the character of the old ranges that are most important.

Anyone new to all this and who fancies looking closer, I'd highly recommend this Oldhammer Reddit, which has many more links well worth exploring. 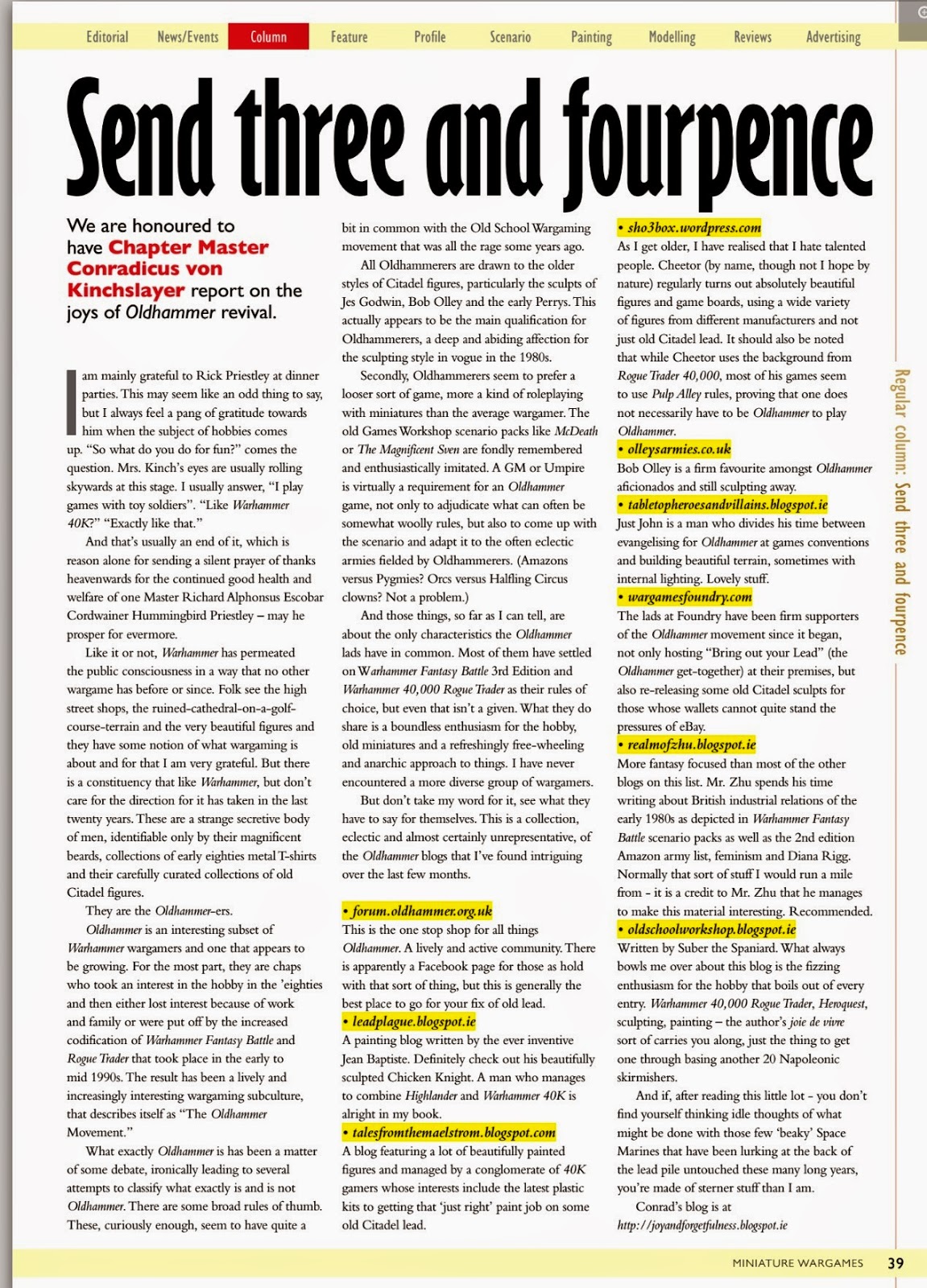