Seeing the sad news of the seminal Harry Harrison's death, Andy and I agreed to do a memorial RT 'Stainless Steel Rat' game... Exactly *how* were going to do this i'm not quite sure but i'm sure it will involve mulitple heist locations, one player playing Jim and his associates and the other playing a special corp team waiting for him to make his move! If you have any good ideas to share before i write something up please do chip in here. My current thoughs are to use the cityfight boards. Three to five possible hesit locations that must have a guard in proximity every other turn and 30 to 40 'citizens' of which any one can be revealed to be the SSR at any time (only revealed once of course). The gm using the citezens to create interferance.
Posted by Major Hazzard at 19:54 2 comments:

I've done my best to put in a brief narrative to accompany the pics from the last battle. I'm sure to have forgotten something as so much happened and it's over a week ago now! Anyway, rather than reposting all the pics i've edited the previous post to include the text, hope you like it.
Posted by Major Hazzard at 12:19 2 comments:

Found time for a quick game last week of Block Mania with my friend Carrie, while not one of our normal gaming group Carrie is a keen gamer and took part in last years 'agri world' game. Pretty quick and fun game by all acounts which as ususal was utter carnage until the judges arrived to Stumm gas everyone. Most notable indidents were Samantha fox having a huge crack appear right in the center at her bottom and Buddy Holly having his entrances set on fire. currently looking for a copy of 'mega mania' if anyone has one they want to part with? 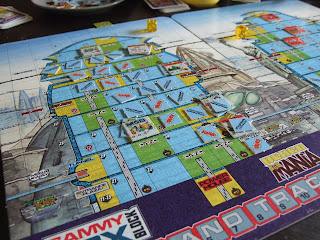 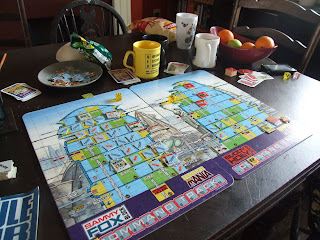 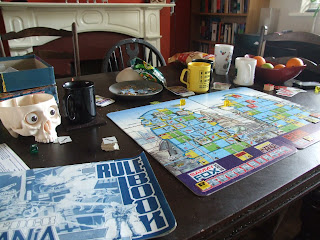 Right as I remember it here is the report of the battle. Curtis's radical Inquisitor is convinced that the hive mind can be countered in a less direct method than all out war and has arranged a meeting with zoat envoys (and their human assistants) on an arid research station world. Unbeknown to him his nemesis 'Inquisitor Hand' is hot on his trail and arrives on Fergus's World shortly afterwards. Curtis' warband consists of his Inquisitor (i never got his name), a squad of marines with a medic, a psyker and a few combat servitors. Andy's force consists of Inq hand, a death watch kill team, a rogue Trader and his displacer field wearing Jokaero assistant and an 'observer' from the Adeptus Mechanicus... a power armoured squat. Army leaders are all Major heros, inidvidual character heros and unit leaders champions. Servitors are just that.. servitors. 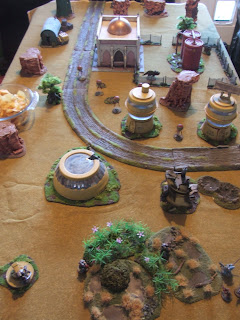 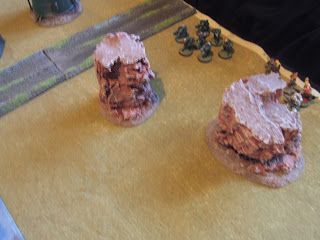 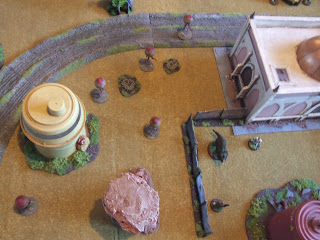 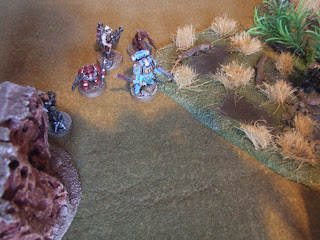 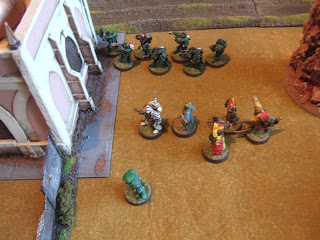 Both warbands advance as the local populace tries to flee. Curtis persuades the farmer that he is on Imperial business and tries to press gang him into service. This is less than successful and later a casualty occurs when the livestock stampede. 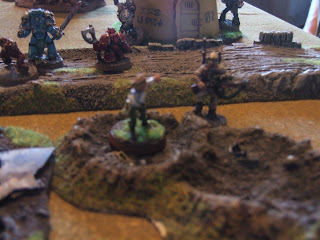 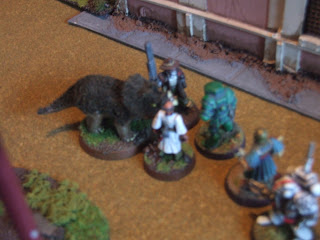 Curtis Inquisitor makes a psychic link with the Zoat emmisary and the magus, at around this time Hands men uncover the Zoats hiding place and the Zoat engages them in hand to hand combat as the magus, eventually convinced that Curtis is genuine makes a run for it. Curtis' marines make a stand in the temple building and a firefight ensues as Hands warband attempt to kill the xenos emmisaries and arrest Curtis's radical. Each turn however karnak floaters have been drifting across the battlefield... if they are hit they tend to explode. for most the game this is uneventful until an agri tractor with some fleeing lcoals on is hit by one causing it to career out of control, running over one of Curtis's marines (he survives) and then coming to a halt still on fire. 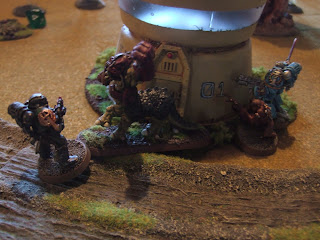 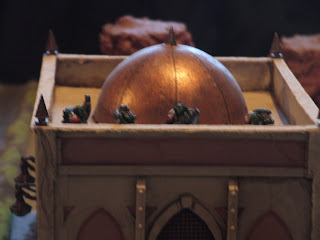 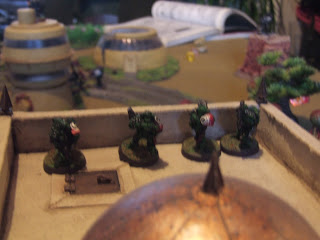 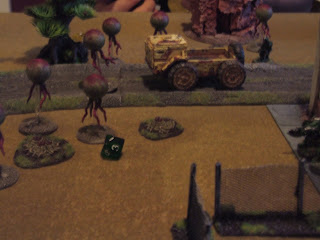 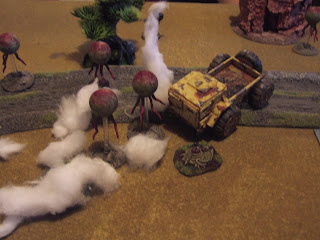 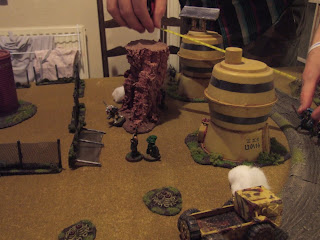 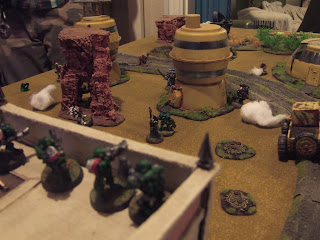 Hand's men come of worse in the firefight depsite the Rogue trader's judicious use of indirectly fired stasis bombs (one manages to clip curtis's radical and hold him for a short while) and the plucky Jokaero who stays in the fight despite being on fire and wildy displacing around the table. With most of his men dead or dying Hand authorises 'exterminatus' and the Squat unleashes a virus bomb to make sure *nobody* leaves the planet alive. Here we improvised some rules and increased the effectiveness of a virus grenade to 3d6 spread per turn rather than 1d6. We also allowed it to spread without dead bodies... Curtis now was against the clock, or the dice, as he had to leg it with the xenos magus (the only character not in a sealed suit at this poinst) before the virus caught up. Each turn he ran towards the table edge (and safety of a shuttle)as the virus killed citezens and livestock in its wake... in a great moment of tension it looks like the magus was about to clear the board, the virus spread was approximately 18 inches away (or so it seemed) and unless Andy was very lucky and got a maximum spread he was scott free. Andy rolled for the final spread and got an incredible three 6's and a full 18 inch spread.. the magus seemed doomed but we measured it out and incredibly he was 18 and half inches away! So escaping by the skin of his teeth the magus linked up with Curtis's radical to enter talks with the Imperium. Whether he succeeds in seducing this tainted Inquisitor or whether the radical sees the error of his ways is yet to be seen. 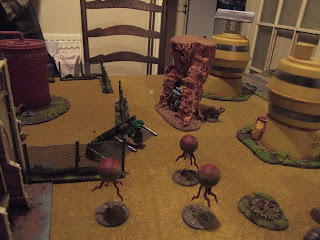 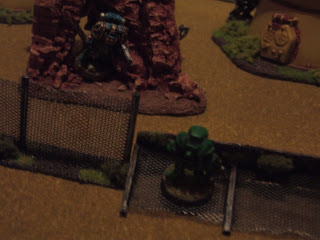 All in all a cracking (if somewhat weird) game of Rogue Trader and my only regret is that with Curtis moving away for a while it might be some time before we have a rematch.
Posted by Major Hazzard at 13:50 9 comments:

Great game of rogue trader this evening with Curtis Fell (ramshackle games) and Andy. Some utter craziness that only the original can provide including teleporting monkeys on fire, exploding floating fungus pods, hit and run drivers, alien hybrids, telepathic arguments and a killer virus! Post on the blog soon.
Posted by Major Hazzard at 22:42 2 comments: 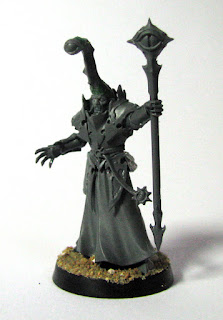 The first of two squads of Space Pirates/Chaos Reavers, plus a Chaos Navigator.
Posted by Colonel Kane at 16:32 13 comments: 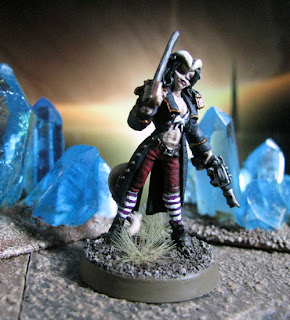 And here she is finished. I've started on her scurvy crew - two squads of space pirates made from a variety of Citadel plastic Chaos Marauders, Catachans and other bits and pieces, plus I have her trusty sidekick the Chaos Navigator ready to start soon, in the form of one of the new plastic Citadel Chaos Sorcerers.
Posted by Colonel Kane at 16:02 4 comments: