Just to keep you all updated with the state of play in regards to the Henrie Boys gang. They are doing really well, considering they have only played in three games, and now have a gang rating of over 2000!

For the future I plan to use the Ash Wastes supplement to design a vehicle or two (the ones that are almost finished from my WiP's), and I may also bring in some more gangers. Having earned over 1200 credits from selling off the two war robots and other items that were scavenged, the gang is in a really strong position to push out the rag tag forces of the Pontiff. I maybe able to convince the Guild to give me more of a voice on the Planetary Council, and put some pressure on the Guard contingent to look elsewhere.
Posted by Martini Henrie at 17:56 3 comments:


The Pontiff GM'd a game using the Rogue Trader robot rules, in which the Henrie Boys were out salvaging while Patrol Drake had tracked the rogue robot to the outskirts of a settlement. 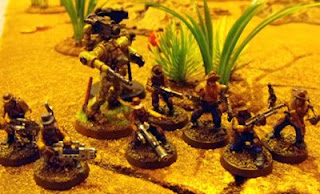 The Henrie Boys (plus one of the war robots) 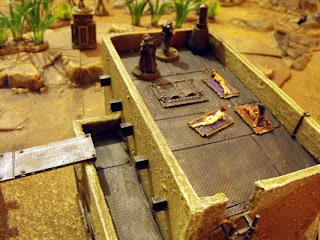 Dr Zarev and co await extraction atop his workshop.

+++CONTACT REPORT+++
Following Patrol Drake’s contact with the malfunctioning war robot in the wastes, I ordered Drake and his men to track this threat down and eliminate it. Within 48 hours, Drake had located the robot, closing in on the settlement of Kamirif-777.

Closing on the war robot, the patrol saw that it was not alone – a second robot was nearby. Mechanicus adepts on the HQ staff have hypothesised that the first robot was fitted with some form of transmitter, which is re-activating others of its kind that have laid dormant in the wastes since the war. We can only assume that more are out there.

The patrol reported that the robots were closing upon the workshop of one Dr Zarev, a civilian tech of use to the garrison. Drake was issued the primary objective of evacuating Dr Zarev and his staff (an aid and three of his harem), and the secondary objective of disabling or destroying the war robots.

To make matters worse, it appeared that a number of wild grox were roaming area, and that the craters that filled the area were emitting some form of radioactive field. 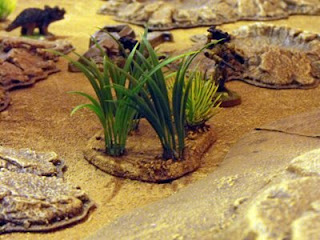 Approaching the objective from the south, the patrol located the war robots, but found that so too had others. A party of the Henrie Clan, a familial grouping loosely associated with the Imperial Mining Concern were closing in on the robots, intent it seemed upon claiming them, and other items in the area, as salvage. 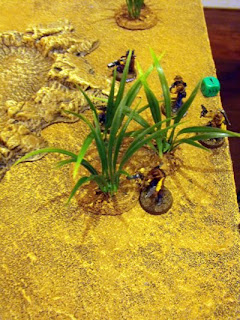 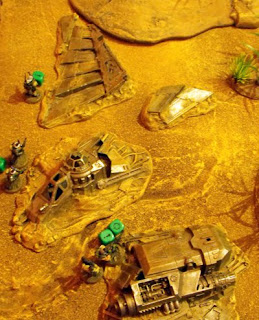 Patrol Drake positioned a fire support group at their insertion point, Drake himself leading a party to escort the civilians to safety, while the miners engaged the robots. The patrol had learned its lesson well from its previous encounter, and made use of every available scrap of cover so as not to be targeted by the robots’ erratic combat routines. It appeared that the Henrie clan were likewise cautious, but never the less a firefight between the miners and one of the robots soon ensued. Under cover of the firefight, Patrol Drake closed on Dr Zarev’s workshop, and made contact with the civilians. 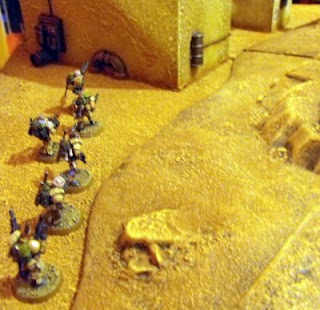 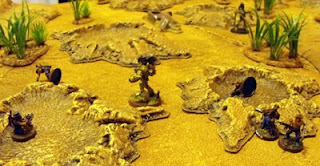 Meanwhile, the miners had come under heavy fire from one of the robots, while the other blundered towards the patrol. A number of the miners were wounded as they were targeted, before specialists armed with plasma and melta weaponry disabled a robot. 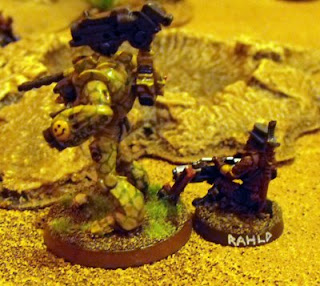 As the patrol escorted the civilians to safety, they were forced to engage the other robot, which was now blocking the escape route. A meltagun blast stunned it, and then Drake himself, equipped with his power fist, charged and destroyed it. 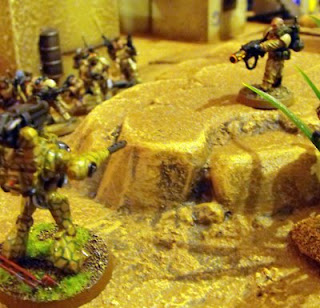 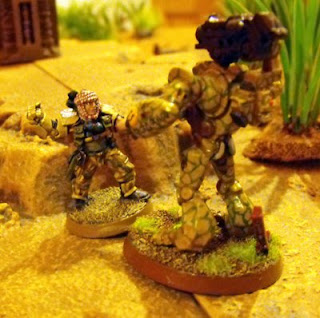 ...and Drake finishes the job!

Both robots were now disabled, and a firefight ensued between the exfiltrating patrol and the miners. The fight was brief but intense, and a number of miners were wounded by the fire support group, though it is not known whether any were killed.

The civilians escorted to safety, Patrol Drake disengaged. Trooper Serik was wounded, but Trooper Reko administered combat first aid. The patrol’s primary objective was satisfactorily achieved, while its secondary mission was at least partially successful. Despite this, it appears that the miners escaped with a significant amount of salvage, which they will no doubt dispose of on the black market for a considerable sum.

Intelligence now suggests that the Henrie clan are engaged in some form of power grab, perhaps taking advantage of the generally declining security situation on Jeriko Reach to establish themselves as a powerful faction. We can scarce afford to be fighting both the uprising and renegade factions too.

I posted a WiP of this building ages back, and I've just today put the finishing touches on it. It's an industrial/arabesque building for a native settlement on Jeriko Reach.


The bulk of the building is foamcore, with inside-out GW Cities of Death building panels on the front, to provide the 40k feel. The deck is tread plate textured plasticard with small plastic rivets a mate brought back from Japan having raided the modelling shops there. The surface is textured with a mix of plaster and white glue and a variety of details added from the bits box. 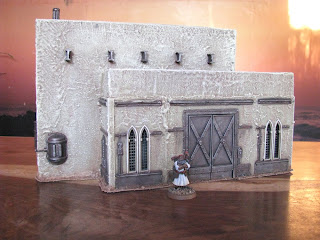 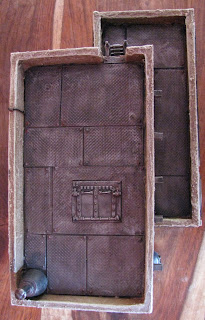 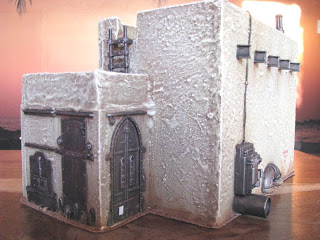 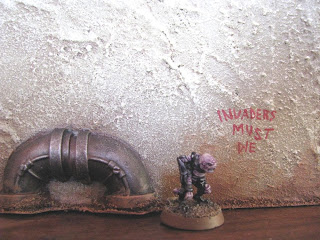