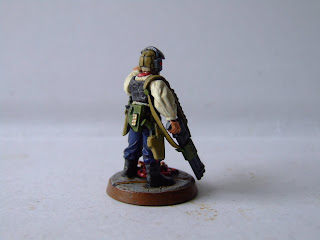 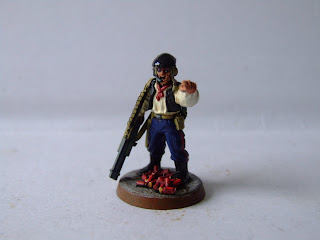 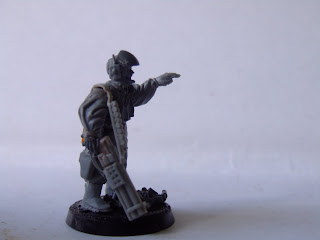 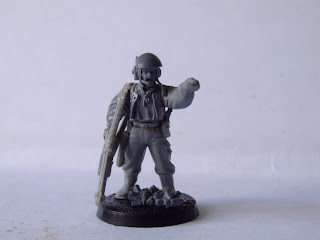 Now.. those that know me will know that I rarely if ever bother with the newer stuff for 40k, especially not plastics.

For me its all about the character, collectability and nostalgia of those early ranges - painting and collecting them as an adult (loosely speaking) brings back pleasant memories of golden summers fighting battles over rubbish home made terrain and using tanks made out of star wars toys in my mates garage.

Anyway... I was kindly invited to join on the Colonels Rogue Trader RPG game and in the spirit of the invite and inspired by his awesome Voidmaster I thought I'd have a crack at doing an 'avatar' of my own character.

Again I went for a Voidmaster but on a different track, my characters an ex imperial Navy pilot/helmsman. 'Isiah Crook' is loosely based visually on a certain famous sci fi smugler pilot and I tried to incorporate at least one element from classic RT goodness (its cunningly highlighted in yellow for those failing to spot it).

As a former fighter pilot I gave him some old Navy flight trousers, chopped up some cadian boots to maek pilot boots and used the upper body from some WFB empire free company and cannon crew to give him a more buccaneer look. Originally I'd managed to convert him to have one hand on his hip which was a better pose astride a bucketload of spent casings from his 'boarding shotgun' - but the 'shouting' head looked odd with a static pose. I really liked the head from the tank crew sprue and originally meant to use a valkerie gunner or pilots head but this looked better, especially with black gloss painted shoulder pad put on the front as a 'blast visor' (another nod to said film).

Lastly in a break from tradition I decided to base him in a less rural way as I imagine most of the action in the campaign will be aboard ship and station!
Posted by Major Hazzard at 13:35 2 comments:

Here's a quick shot of the Rogue Trader I've just finished, before the light goes. He's built from so many parts I'm not sure I can remember them all, and he took about three builds to get right, so I'm fairly pleased with him. I'll take a better shot along with some of his companions when the light's better. 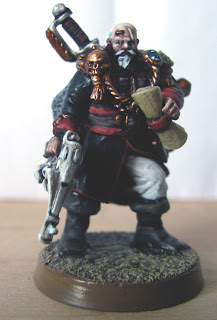 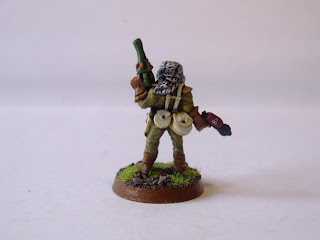 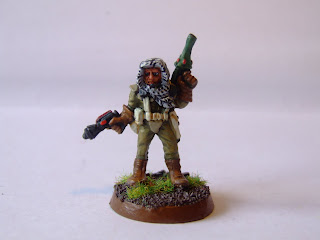 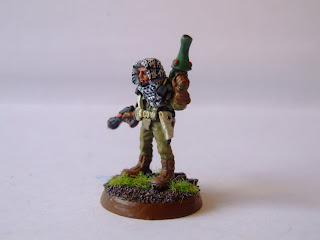 Just who do you think gets the dirty job of landing on all these planets first...

I tried to go for a slightly suntanned desert wanderer look and i'm not *amazingly* happy with the shemagh but it will do for now, if i find later i can paint it better I'll give him a repaint.

I particularly like how he's got an eldar pistol being on the fringes of known space and unlikely to get executed for xenos weaponry and also probably having had contact with Eldar several times in the past as the vanguard of humanity.
Posted by Major Hazzard at 14:58 No comments:

Just finished this miniature (literally, sorry about the glare on the wet paint on the base!). He's my character in the Rogue Trader RPG, a 'Voidmaster', which is character class specialising in anything to do with the running of a starship (could be the master helmsman, gunner, sensor guy, anything like that).

He's converted using the legs from a servitor, torso from a Catachan heavy weapon crew (with greenstuff piping and raggy coat sleeves), the left arm from the original servitor, right from the Catachan command squad set, shoulder pads from Mongoose Judge Dredd Street Punks, a resin Forge World head and the hat is from a Privateer Press mercenary Warcaster - so quite a rummage in the bits box for that lot! 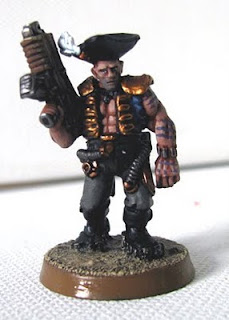 A ten minute paint of one of the old familiar models.

I'm going to try and track down a few more of these to make a pack of them.

regrettably the citadel archive familiar packs you can buy dont have this one in them...

I'm leaving basing him until i've a batch of minis to do.
Posted by Major Hazzard at 10:31 4 comments:

Right chaps, i've got about 30 or so RT space marines due for a paint job.

I've narrowed it down to a few ideas but would appreciate views from those of you who dig what we do.

Essentially i like old school marine paint jobs and i love marines in camo... I also 'got into' 40k with the old badad war spread in White Dwarf 101 - so much so i once wrote an entire campaign weekend based on it. So i really want a chapter from the Badab war.

I like the idea of space borne chapters so one idea was Space Sharks or Fire Angels... both have regular variants and a cool camo version to add some variety.

My number once choice would be lamenters but i'm still struggling painting large blocks of yellow and I think the shoulder pad would be a nightmare on 30 minis... however i do adore the concept and background of the lamenters.

A recent thought was the mantis warriors, again space born, again with a regular scheme and a camo variant... i also like the fact they seem to be a renegade jungle fighting chapter and woudl make great opponents for the swamp tigers.

So people thoughts?
Posted by Major Hazzard at 23:41 11 comments: