Way back in pre-history (1986), a 13 year old version of me started a Warhammer Norse army. I bought it one blister at a time, using the money I earned from my friday morning paper round, and I think I managed to build it up to quite a respectable size. I've no idea what happened to that army, it probably got lost (along with my entire White Dwarf collection) when I left home, but the Norse always remained my first Warhammer love, and I've always enjoyed 'low fantasy', pseudo-historical themed armies as a result. I think its because Warhammer started out using as many miniature ranges as it could, whether full-on fantasy or straight up historical, and mashing them all together into a world full of familiar, yet fantastical tropes, giving that period a certain gonzo charm I've wanted to recapture for quite a while.

Fast forward to late 2013, and I decided I'd make an effort to collect that Norse army again, and this time to do it full justice. I'd be using the 3rd edition Warhammer army list from White Dwarf 107, building up a core of 'sensible' units before adding in the last few truly fantasy units (such as a giant, wolves, Were characters, eagles, that sort of thing). I even posted about it on this very blog! I wanted to keep that low fantasy/pseudo historical feel, so decided I'd be using primarily historical miniatures, but with things like banners sourced from a range of Warhammer kits.

Now, its mid-late 2018 and I can feel the project nearing completion, so I feel justified in showing it off (which will also give me the impetus to finish the job off!) 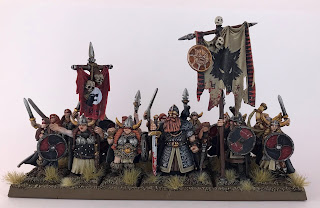 The Kyning and his army standard bearer, leading a unit of Huscarls. The banner is inspired by the art on the cover of Warhammer Armies! 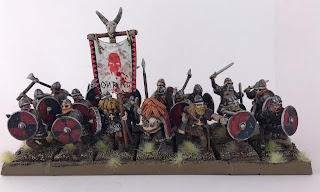 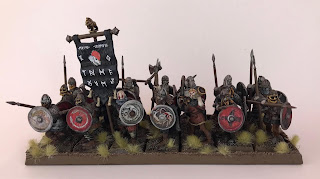 A second unit of Bondsmen. 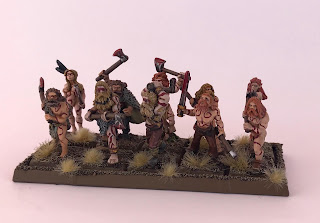 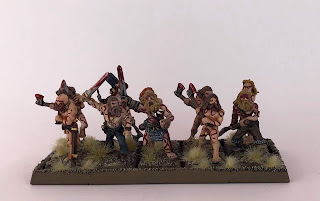 A second unit of Berserkers. 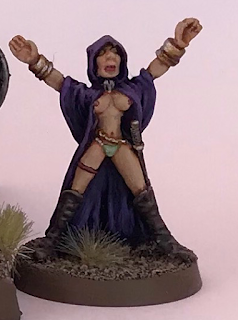 A Sorceress, from Citadel. 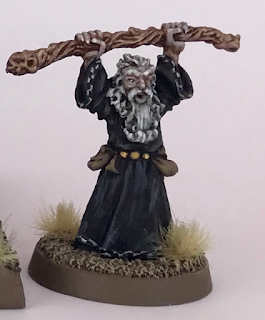 A Wizard (also Citadel). Both wizards will be Elementalists, with a focus on weather magic, as is appropriate to a Norse army. I keep characters that won't be joining units on round bases, as I think its looks nicer (inspired by Warmaster and Warhammer Historical).

Next Up
So that gives me a solid core to the army, and even as I type this I'm working on some skirmishing Bondsmen Archers (three units of ten, on round bases), which should make for a good battle line. I've collected a big (20 strong) unit of Ulfwernar made of Black Tree Design miniatures, and a second of Foundry Bearclad Berserkers. I have two more 10 strong units of Berserkers assembled too, plus associated characters, as well as a Viking-styled Giant by Reaper.

The last few things I need to buy are some Wolves from Ral Partha Europe, some Giant Eagles (from the Citadel Lord of the Rings range) and then some loot pile terrain pieces to serve as the obligatory (in 3rd ed Warhammer) baggage wagons.

Only when I've painted the skirmishers will I allow myself to actually play the army though, and I already have a game lined up with an opponent who plays Dwarves with Norse allies. I'll be sure to post pics of the game, as its been many, many years in the offing!