I've finally finished the jungle patrol I showed a few miniatures from a while back. I may also make them an ACAV style rhino at some point, but there's loads more projects to get on with first! 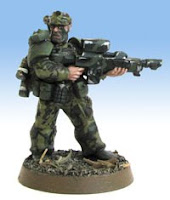 Signaller, posed to stand next to the commander so they appear to be talking. 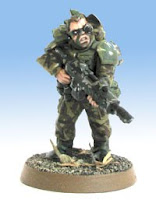 Engineer, carrying a meltabomb on his back and a shedload of krak greandes on his webbing. 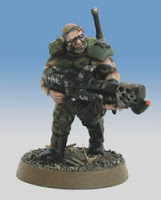 Flamer, for flushing out carnivorous plants and enemy ambushers.

Tracker, with motion detector, to accompany the flamer and direct his fire. 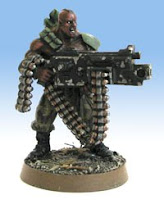 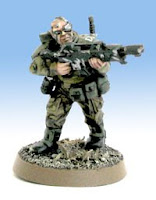 Patrol medic, carrying two medikits on his back. 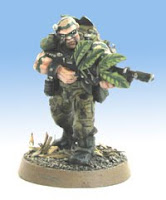 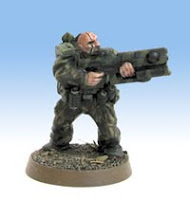 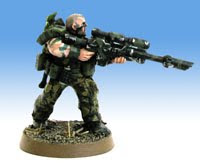 Forget Me Not - Factions

Forget me not has several factions and motivated group to game.

The security militia - desperatley trying to maintain law and order in a dying world.

Agri farmers - both independant and corporations

I've been pretty busy over the holidays working on terrain and factions for one of the new campaign settings - the imperial paradise planet known as 'Forget Me Not' (FMN for short or 'the 'not'.

FMN was once a luxurious paradise world for the imperial elite, in the hinter lands though many arcane tecnological artefacts from a pre imperial time had been discovered the Adeptus Mechanicus and gen-techs worked in secret laboratories and upon research stations on FMNs twin moons to discover the origin of these items. Until however disaster struck.

Highly secretive research on the planets second moon of 'shon' appears to have gone horribly wrong resulting in a cataclysmic explosion and destruction of the moon... the most dangerous consequence of this was that FNMs stable orbit began to shift sending the planet to the systems sun every year.

For yeas little changed , the temperature and climate became more tropical but once Imperial geographers and astrologers realised what had happened a decision was made to evacuate the imperial elite in secret but to leave the working and administerial classes in situ.

When FMN flourished the population lived in policed and protected hamlets and towns, food and material supplied by semi automated agro farms. All of these areas were electro fence protected form the local fauna (and flora) and connected by grav rail and travel tube. After the disaster the governor has ceased to be concerned with upkeep of the planer (hes too busy packing his wine cellar for departure) and many of the protective fences have fallen into disarray. This lack of repair has meant that many of the protected hunting reserves which housed dangerous game animals such as carnosaurs and bloodcats have been breached.

For the agri workers and those in remote outlets things have become even worse, destruction of areas of the transport system (many of these destroyed in the epic meteor shower that followed the destruction of Shon) have left small communities isolated for what is now a second year.

All in all the lack of law and order and the fact that the security defence militia forces (known as 'Forget Me Not Blues' after their blue uniforms) are hard pushed to maintain order in the civilised areas has meant that FNM has become a rich picking for Pirates and mercenaries who descend like vultures to pick at the dying planet.

Deep in the lush jungles, heartened by an absence of security patrols the native race of FMN (a primitive lizard like race) have been seen encroaching nearer to human areas wheras once they were only rarely seen around the xenoruins.

Security forces stretched to the limit employ ancient machinery in the form of a demiliarised robot to fend off pirate raiders.

Over Xmas I decided to make a 40k agri farm set.