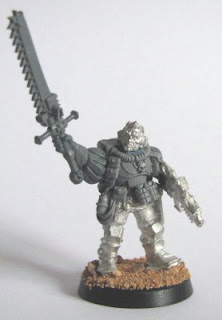 This is a work in progress shot of the Sensei adventurer mentioned a couple of posts down. I've gone for a suitably heroic look and pose, and tried to the keep the clothing in keeping with the sort of sci-fi adventurers you saw in Rogue Trader, Laserburn and Traveller with the puffy renaissance sleeves. The head is from Captain Sicarius, the arms from the Empire general, body from a SM Scout and legs from an IG Storm Trooper Sergeant, plus bits from around the place. These are all components I've had around for ages and I'm pretty pleased they came together ok.

As far as a paint job goes, I'm thinking of lots of whites, so he's very different from an Inquisitor. Maybe a bit like a CLone Trooper, with battered and scuffed armour plates. Any thoughts?

Space Pirates of the Maelstrom

Here's a gang of salty Space Pirates I converted up recently. They use Servitor bodies (for a vac-suit look), with Imperial Guard arms and heads. I've equipped them with the sort of kit you'd expect to see in action in a ship-to-ship mission: a meltagun for burning through the hull, a flamer for clearing out corridors, and shotguns for...close encounters. 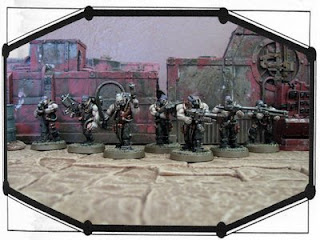 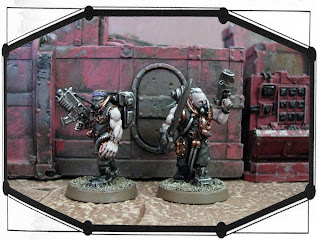 The leaders - bosun with power sword and plasma pistol, and coxswain with bolter. 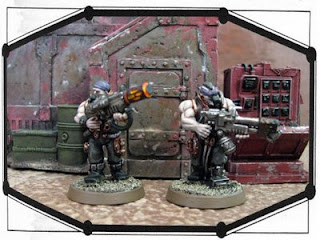 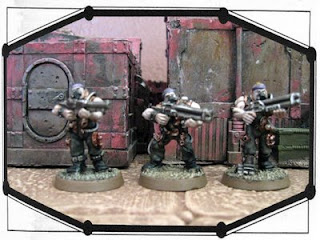 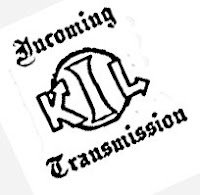 I've generated a Sensei Adventurer Band using the rules from Realm of Chaos, and multiplying the costs by 10 to arrive at a Necromunda Gang Rating of 1736. This results in only 3 members, but they're all heroes, so we'll see what happens. I won't use the Necromunda advance system on them at all, as the Sensei have their own system, making them unique.

I haven't equipped them yet, as I'll work out the conversions first and see what looks good. The RoC system works out at the band having 15 points to spend on weapons, and gives a list of equipment. Again, I'll multiply the costs by 10 for a Necromunda gang rating.

Hopefully I'll start work on some models next week - with only three to do I can put some effort into each one.
Posted by Colonel Kane at 13:25 5 comments:

Incoming transmission from the Maelstrom

Just a heads up, we've been talking for a little while about taking the action beyond Jeriko Reach and into surrounding space. This will allow us to use more varied factions, settings and story lines, and enable all sorts of 'old school' wargaming fun. I've just created a new blog which we'll move over to as we have battles to report. So keep an eye on both blogs for the moment, and we'll let you know when Jeriko Reach will be phased out.

Campaign wise, the plan is to use a lot more factions, in the area of space known as the Maelstrom. This means we can field Rogue Traders, Pirates, Rebels, Orks, Sensei and anything else we feel like trying out. We want to give the whole campaign a lot more of an old school, space opera Rogue Trader/Traveller feel. I'm pretty sure we'll continue to use the Necromunda system as the basis for our games, especially for tracking experience and income, but no doubt we'll introduce other elements as we go along.

Any comments welcome!
Posted by Colonel Kane at 17:13 7 comments:

Why We (still!) Play

We’re publishing this blog because it amuses us to do so - simple as that!

But just as importantly we’re doing it because we want to inspire other people to do the same sort of thing. We don’t plan to present a definitive set of rules or a system, because that’s not how we do things. This is old-school wargaming, how it always used to be played before everyone decided they couldn’t play without an FAQ and needed a scoring system to measure their worth as a gamer!

As with many ‘veterans’, we’ve developed our own gaming tastes over the years, and fancy trying out a hybrid of all our favourite rules mechanics. Many people look to gaming companies or to the web to provide rules specifically tailored to their own tastes, but fail to find them and end up getting bitter with those companies, who are just catering to the widest market possible. Some people even get so angry they try to set up in competition to the big guys, trying to publish their own, clearly superior version of the rules.

But the point is we do this for fun, because we want to, not because we’re angry about something! Wargamers have been making up rules to suit their own groups since the early 20th century, so there’s no reason we should lose this skill.

Anyway, we’re using a combination of the Necromunda rules, Rogue Trader, 2nd edition 40k and whatever else we fancy trying, and tweaking them all as we go along. We’re mostly using the Necromunda campaign system, because we know it works, but we'll mix things up as we go along, as we feel us appropriate.

We tend to take turns running games, with one person setting up a game and GMing it for their own and the other players' entertainment. But even if only two of us can get together, we'll still trust each other to throw in some random silliness, from a wandering Wild Grox looking for a mate to a sudden outbreak of 'MACS' (Mysteriously Aquired Crazy Syndrome).
Posted by Colonel Kane at 16:37 2 comments:

Some recent additions to be slotted into the campaign

First up, sorry for the lack of update from myself, lots of stuff going on in Real Life (tm) but I've still had time for some hobby, even if gaming time has been thin on the ground. We're thinking about taking the campaign off of Jeriko Reach (once we've resolved the Genestealer Cult uprising), and into the Maelstrom (with all the pirates, Chaos, Orks, rebels etc that live there!). With that in mind, I've been working on a Rogue Trader and his entourage, the first few models of which are shown here. 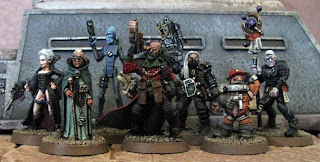 This is the (as yet unamed) Rogue Trader, with the shore party. 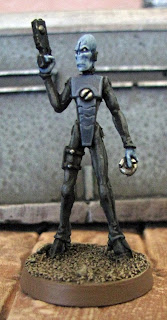 A Tau Air Caste pilot, who the Rogue Trader picked up after finding him blown way off course by the warp currents and washed up on a deserted world in the Maelstrom. He's such an ace the Rogue Trader uses him to fly orbit-to-ground missions. I plan to get one of the new Valkyries as his personal shuttle, painted in the Rogue Trader's livery. 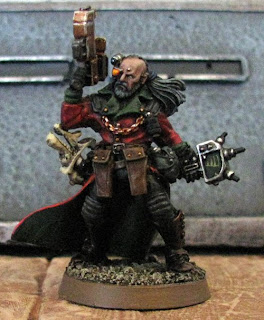 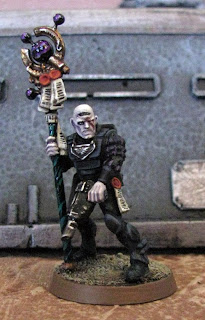 The Navigator, made of loads of bits from different models, with a third eye modelled on with Green Stuff. 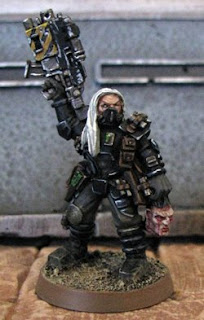 The Rogue Trader's bodyguard, using an out-of-production Necromunda Bounty Hunter.
More to come, plus details of our plans to start a new blog as and when the action moves on!

This game was set on another (yet to be named) planet in the Jeriko Reach system near the Maelstrom, and the scenarios were set individually for each team. With Clara Toft the Archo Logist being GM’d by the Pontiff, the Alpha Legion’s tasks were to capture her and also to collect as many items from the 2 domes as possible. The Lictor just had to get in there and sample as much of the local population (with extreme prejudice) as possible.

The game started off with Clara and guards deployed between the two domes, followed by the chaos gang deployment in one corner opposite. I had made some blip counters for the Lictor which were placed strategically around the board, with the GM informed as to which the genuine article was.

The Lictor and Blips

The game started slowly with the Marine lead gang cautiously approaching the domes, being wary of the blips movement. The moment of contact still came swiftly, with the two guards proving utterly hopeless at protecting the Logist who ran for the larger of the two domes. Instead of pursuing the now cornered Logist the Alpha Legionnaire went into the smaller dome, and it was at that point that the Lictor struck taking down the two gangers it charged with ease, and following up into the small dome.

A round of shooting from the Marine and those that could see through the door caused a wound on the Lictor, which then dived into combat with the result of taking out the Marine. While that was going on a ganger went into the larger dome to hunt down Clara, and everyone else went onto over watch while waiting for whatever came out of the door.

The dash between the domes saw the Lictor take another wound from the crossfire. Once in the dome the ganger was quickly dealt with, but this allowed Clara to escape into the arms of the chaos gang who were also looting the smaller dome for all they were worth (dragging out the limp body of the Marine, no doubt). Again fire from the gang into the doorway caused another wound on the Lictor (more on this in a moment) causing it to cower out of sight. It was at this point the Chaos gang bottled out and began withdrawing, the cunning Lictor sensing this waited for the Heavy with the multi barrelled heavy stubber to move before charging out of the door. Unfortunately the fire from the rest of the gang was more accurate taking the Lictor down, and out of the game.

This ended the game with the Lictor Victorious, causing the gang to bottle and the gang coming out well by capturing their target and having some loot. Later checking the stats for the Lictor I found it had only 3 wounds on its profile, however this was balanced out as the 5+ save should have been unmodified so it wasn’t such an issue.

In the end game sequence the Lictor had a full recovery, as did most of the chaos gang. Not so for the Marine who ended up with a leg wound, the injury table rolls were the strangest I’ve seen with 5 full recoveries rolled!

The current stats for the Lictor can be found here. http://www.lastsummer.com/necronet/gangc.asp?id=208