For our third Rogue Trader game in this organically-evolving narrative campaign, we decided that the Sensei captured by the hired gun techno-punks at the end of the last game would be the target of a rescue attempt – by an Inquisitor who's been trailing the Sensei for many years.

The gangers' lair would be deep within the void station, meaning that the Inquisitor and his indentured forces (local defence militia troopers) would need to fight their way through three levels to reach the cell, going from an entry point to an exit point on each level. I noted down before the game which level (1 to 3) each of my ganger models was on, and I set them up first in each case, representing them standing watch and expecting an attack. We would roll for first turn on each level too.

My gangers consisted of Boss Hamm, a human major hero, the psy-assassin Gayle (a human psyker major hero armed with a force sword and a smile), Ark, a flamer-armed minor hero and nine other human gangers, armed with a selection of knives, lasguns and laspistols but nothing too advanced.

The first level consisted of two 12”x12” Zone Mortalis tunnel sections, and Inquisitor Black's band came in force through the wall, the assassin Helvetica killing a ganger almost straight away. Ark fired up his flamer and set one shock trooper alight, who died soon after, failing to wound the other three he hit. As the attackers came on Ark took more fire but shrugged it off, again engulfing more attackers with flames but completely failing to wound any. Amazingly, he weathered a third round of fire, before the Inquisitor's pet psyker cast 'Jinx' on his flamer. Realising his time was up, Ark turned and bolted for the exit down to the next level, the other surviving ganger behind him as the attacking forces swarmed down the corridor after them. 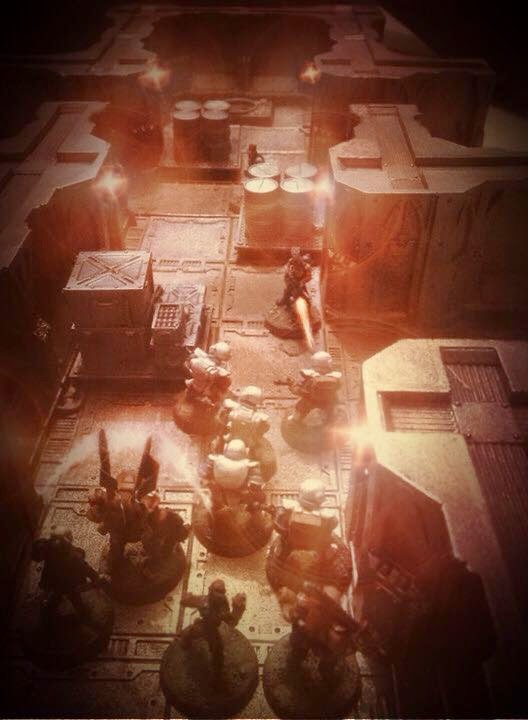 
Unseen by the gangers, the assassin Helvetica used her polymorphine dose to assume the form of the ganger she'd killed, so we swapped the models and decided that an Intelligence test would be needed to spot the disguise before she gave herself away by attacking.

On to level two (which was made of four 12”x12” tiles), and I set five more gangers up in two positions, as well as Ark and the other ganger from level 1, who had three turns worth of movement on the attackers (putting Ark almost at the exit down to level three while he ordered the other ganger to cover him).

First down through the hatch was Helvetica disguised as the ganger, and as she approached two gang sentries they failed their Intelligence tests to spot her disguise and so got charged and killed in short order the next turn. Meanwhile, Ark waited near the exit down to level three while the two autogun-armed gangers fired on the approaching shock troopers, killing one. One ganger fell having had Steal Mind cast on him, not even able to defend himself as he was brutally slain. 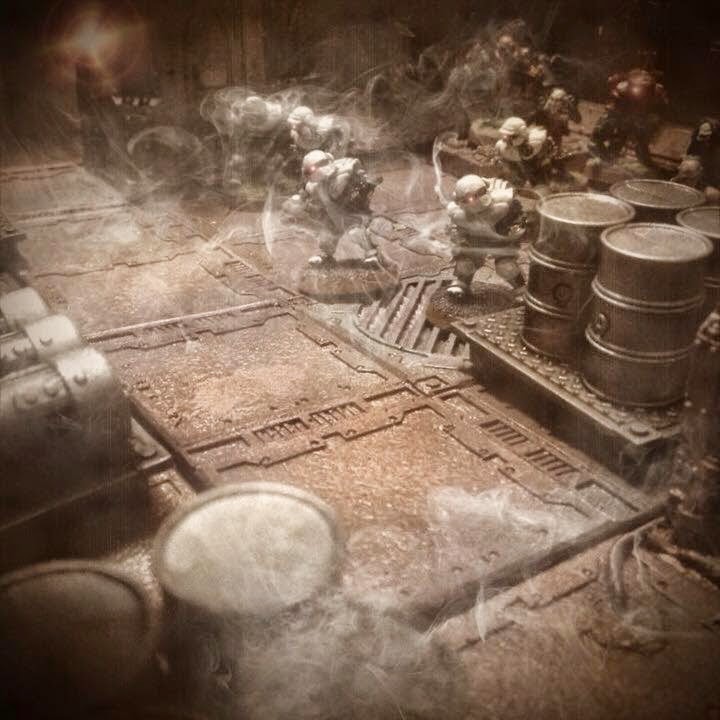 Eventually, the attackers closed through the hail of fire, but as they reached the exit point down to level three, Ark slammed the blast doors down in their face. It took the Inquisitor using the Smash psychic power as well as two krak grenades to break through the (Toughness 8, 10 Wound) door, by which time the gangers had a three turn lead on his force when it came to defending the third and final level. 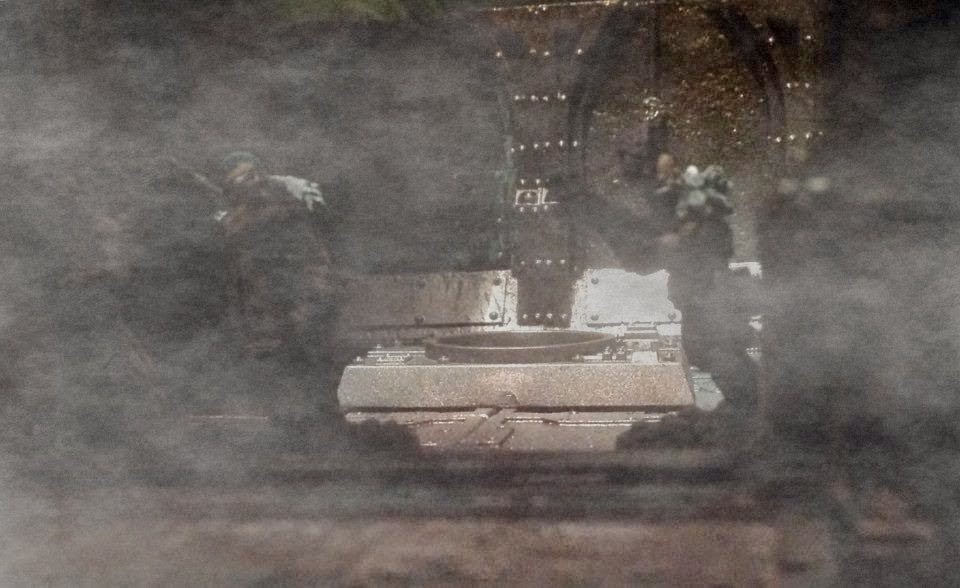 Ark and two fellow gangers close the blast doors on the approaching invaders.


Level three was made from six Zone Mortalis tiles, and contained two cells closed off by heavy blast doors. I secretly noted down who was in each cell and set the other gangers up for a final, desperate defence of their lair. Here we improvised by saying that if Ark could get to a weapons crate he could roll on the Basic Weapons table in Rogue Trader to find a weapon to replace his Jinxed flamer, more of which later. 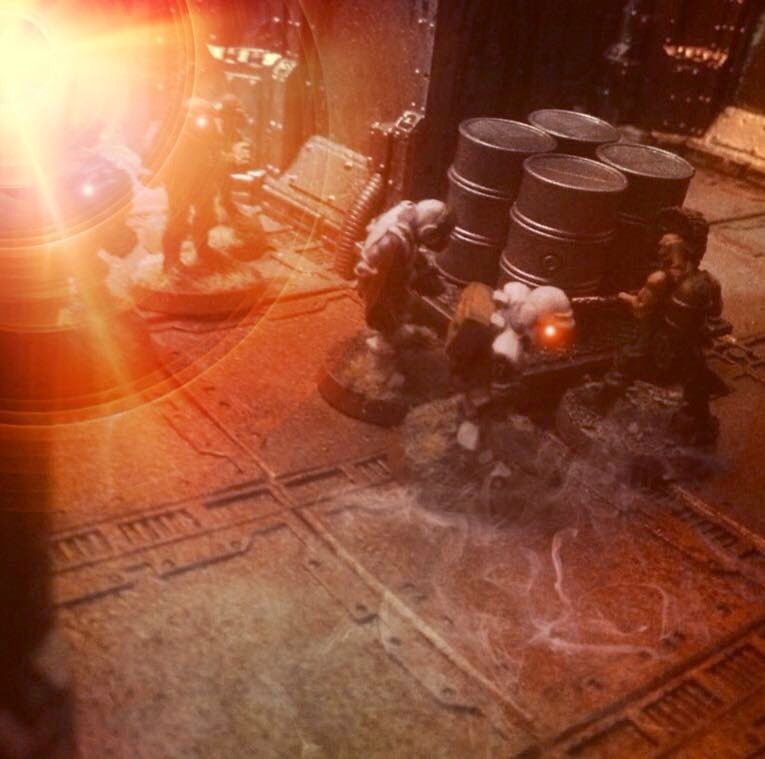 As expected, the fight for the third level was intense. When Ark saw the ganger he'd seen killed on the top level coming towards him he knew it was a trick and shouted to his men as such, and so Helvetica's cover was blown and we swapped back her model. As Gadge had only bought one dose of polymorphine she couldn't pull that trick a second time, though I imagine next time she'll have more.

All subtlety cast to the wind, Helvetica charged the knife wielding gangers, who unleashed a barrage of frag grenades in response, taking down another shock trooper before they were sliced apart by the vengeance assassin. As this was happening, Ark had reached the ammo store and was rifling through its contents in search of a useful weapon. I rolled on the Basic Weapons chart, resulting it a handbow, which Ark threw aside in desperation hoping for something more useful next turn.

Meanwhile, the Inquisitor and the rest of force emerged and it looked increasingly like Ark would be overwhelmed. Praying to the Emperor whose name he had taken in vain far too many times to deserve an answer, he continued his search for a weapon. This time, the roll was a keeper – a plasma gun! Grinning, Ark opened fire, using the weapon's sustained fire to incinerate the entire first rank of shock troopers before their captain broke through and put him down for good.

Things fell dangerously silent for a moment as Inquisitor Black surveyed the scene. There were two heavy blast doors before him, either one of which could contain the captured Sensei as well as whatever other nasty surprise the gangers still had in store. He cast 'Sense Presence', and so I placed two markers in one cell and one in the other. The Inquisitor's mind made up, he pulled out another krak grenade and set to work on the cell with two life signs in it.

Then, the other blast door rumbled up and a dense, glowing fog rolled forth. I'd hidden Gayle in there as a trap, and she had cast Ectoplasmic Mist to cover her appearance and confuse the attackers. Helvetica clearly sensed a powerful rival assassin and skirted the edge of the psychic fog as the Inquisitor continued to try to break down the other cell door. 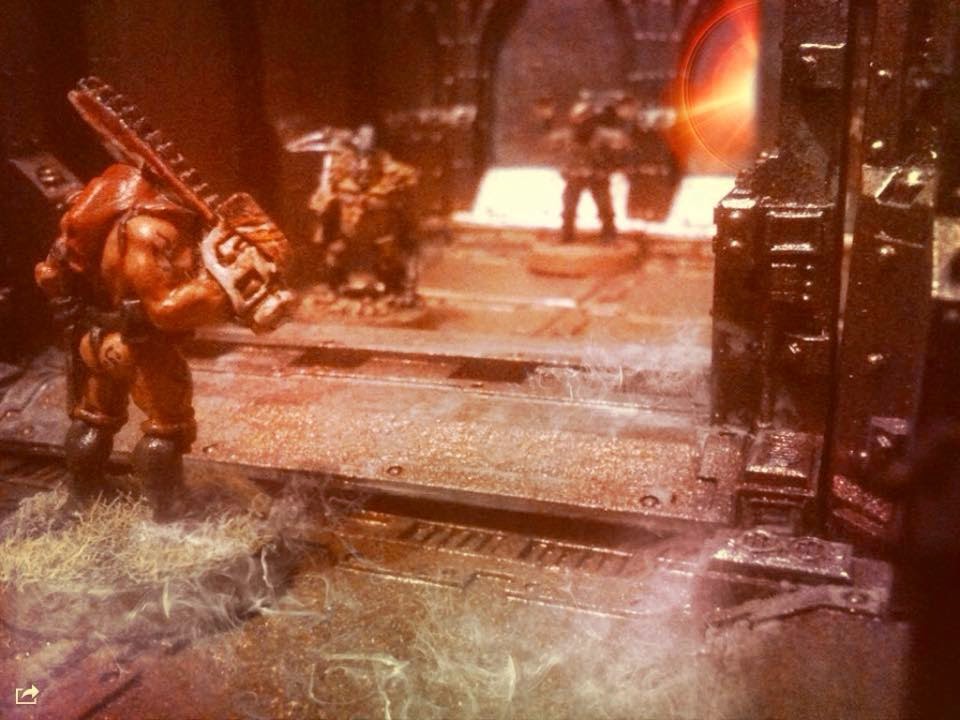 The cell containing the captive Sensei is finally blown open.

The combat between Helvetica and Gayle was brief and bloody, Gayle putting five psy-points into augmenting her force sword's strength. Even as the Inquisitor finally broke through the other cell door, she dashed out of the shadows and killed the shock trooper captain, but not quite quick enough to help Boss Hamm. 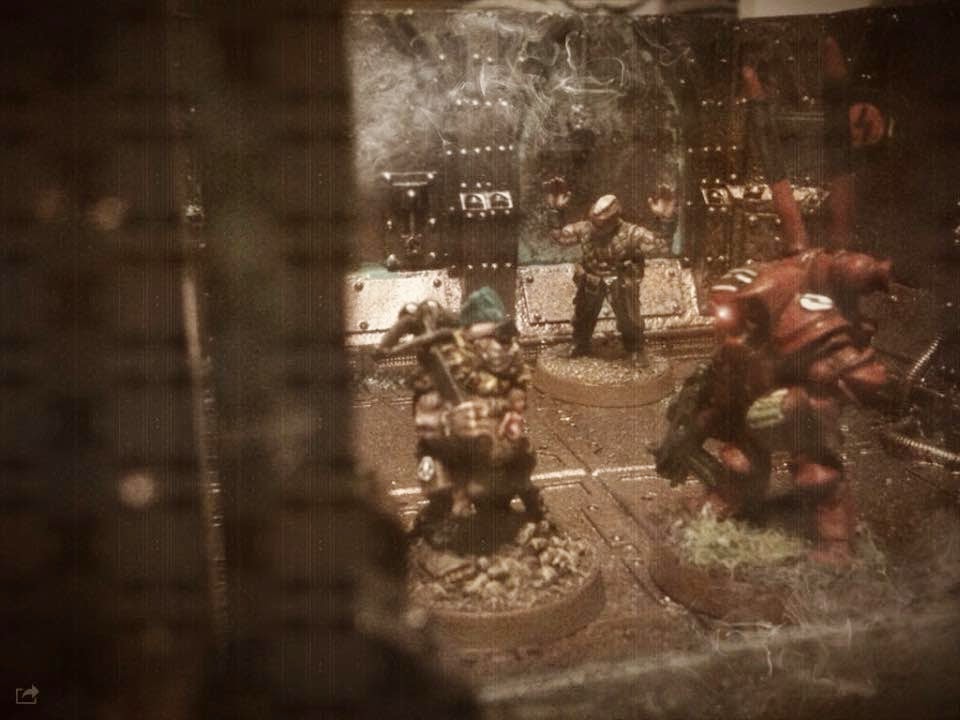 Inquisitor Black and Boss Hamm fight to the death.


As Black stalked into the cell through the shattered door a hail of bolt shells struck him as Boss Hamm prepared to sell his life dearly, wounding the Inquisitor. The two were evenly matched, but over two turns Inquisitor Black prevailed, turning just time to see Gayle closing in on him and shooting her down with contempt. 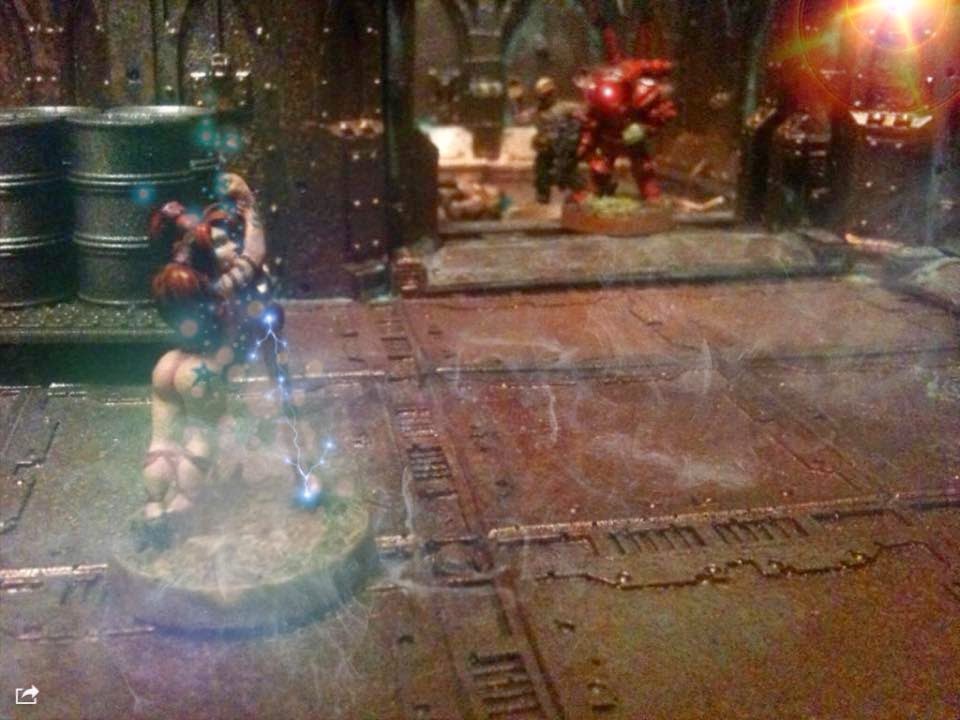 Gayle powers up her force sword, but Boss Hamm is already dead.

Though his strike force lay dead all around him, the Inquisitor finally had his prize...

Many thanks to Trevor Goddard and Jonathan Peace for adding the special effects to these pictures! 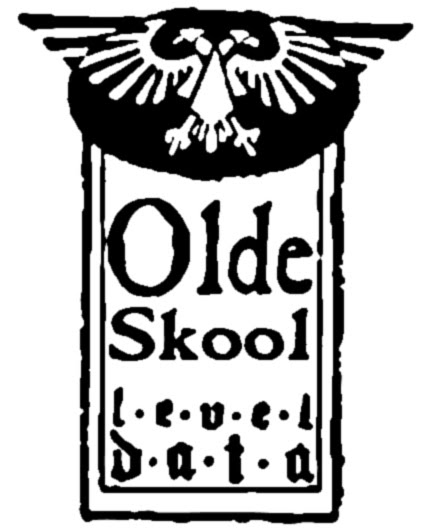 Well then, you wait two years then two battle reports come along at once! Following last week's game, where Gadge's Sensei warband captured the coordinates of the 47 Tucanae Passage, a warp route leading out of the galactic disk to a dense cluster of Slann homeworlds, he's arranged to link up with some compatriots, including a Navigator and a Piscean Tracker, at an outlaw void station. An as yet unidentified rival has hired a local gang of degenerate techno-punks to ambush the Sensei and stop him reaching the planets of gold!

For this game we decided to use a Forge World Zone Mortalis board to represent the shabby interior of the void station. Gadge took his Sensei from last week, plus the Navigator, Piscean and an Eldar free trader they were linking up with. I took a gang of techno savages (the old Mark Copplestone Future Warriors miniatures) plus a converted Hasslefree barbarianette armed with a force sword. Both sides came to around 450 points and each had a level two psyker. 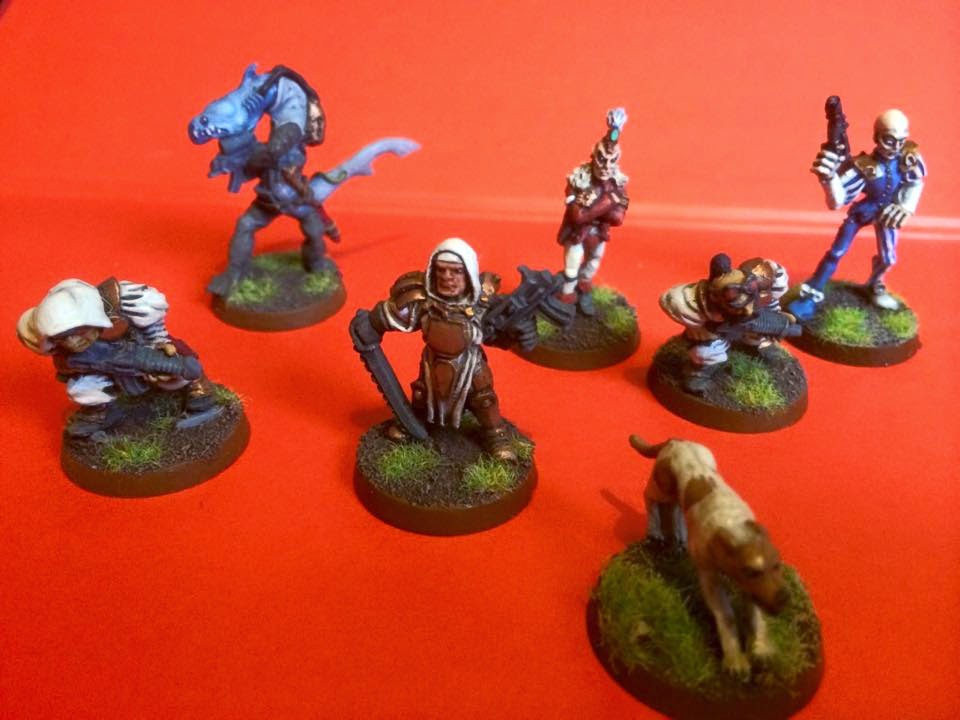 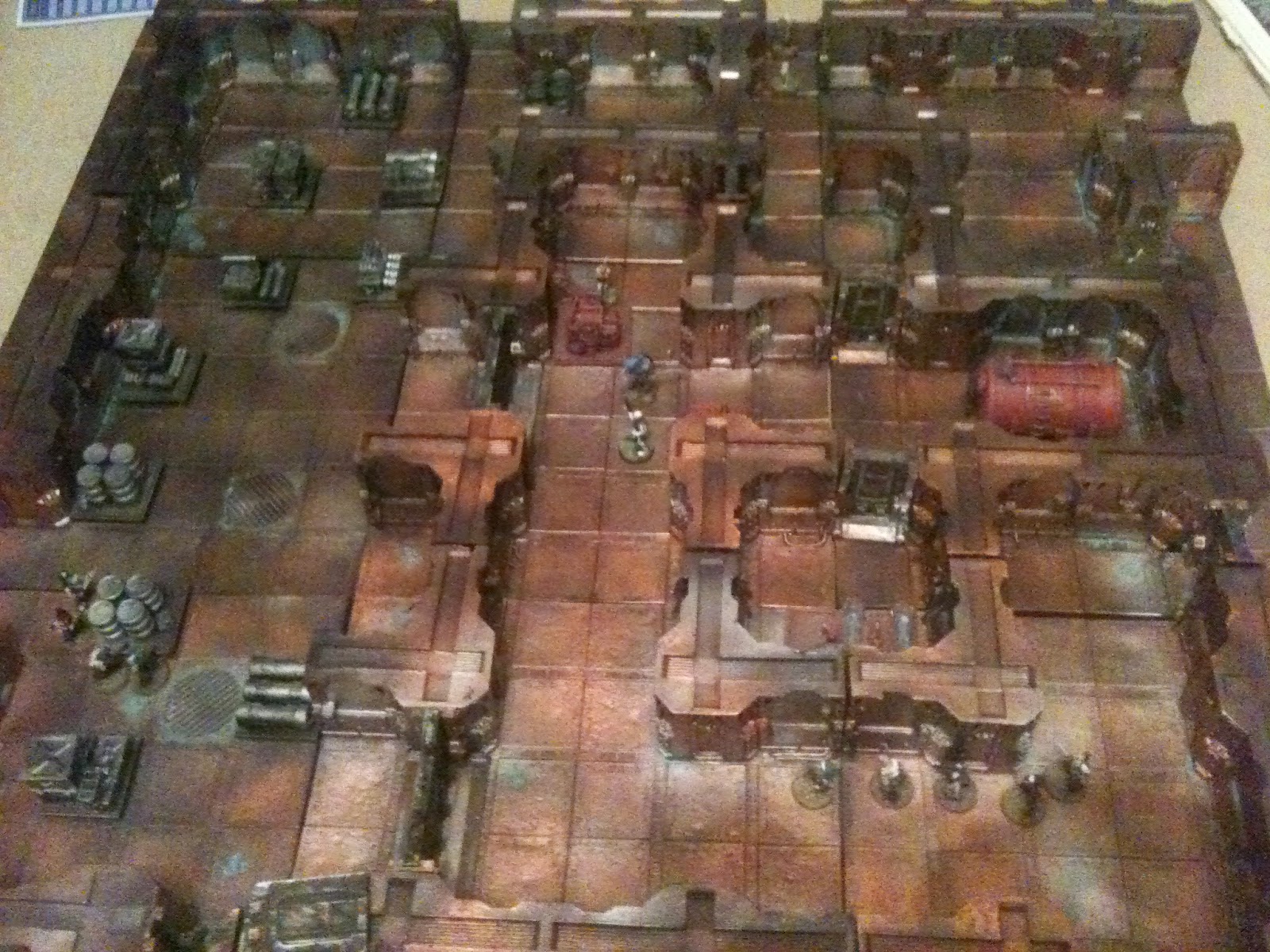 The field of battle. The Sensei enter at the top centre in order to link up with their compatriots in the middle of the board. The techno-punk kill-mob enter from any board edge.

The Mission
We decided between us that the mission would be centered around the Sensei meeting their associates and then exiting the area by way of one of the two large access points (one on the southern edge in the picture above, the other on the western edge). The kill-mob would be attempting to stop them.

As the Zone Mortalis board includes movable doors, we decided that an Intelligence Test taken in the shooting phase instead of firing a weapon would open or close a hatch, and that this could also be done using the Telekinesis power.

Action!
The kill-mob deployed in four groups. One squad came in from the south, one from the west, while the Grammatrix Gayle infiltrated from the north and Boss Hamm came in from the south west. There was much hiding in the first few turns, leading to a tense stand off which lasted until Gadge's two units had linked up. Then, it all kicked off!

Here are a few highlights... 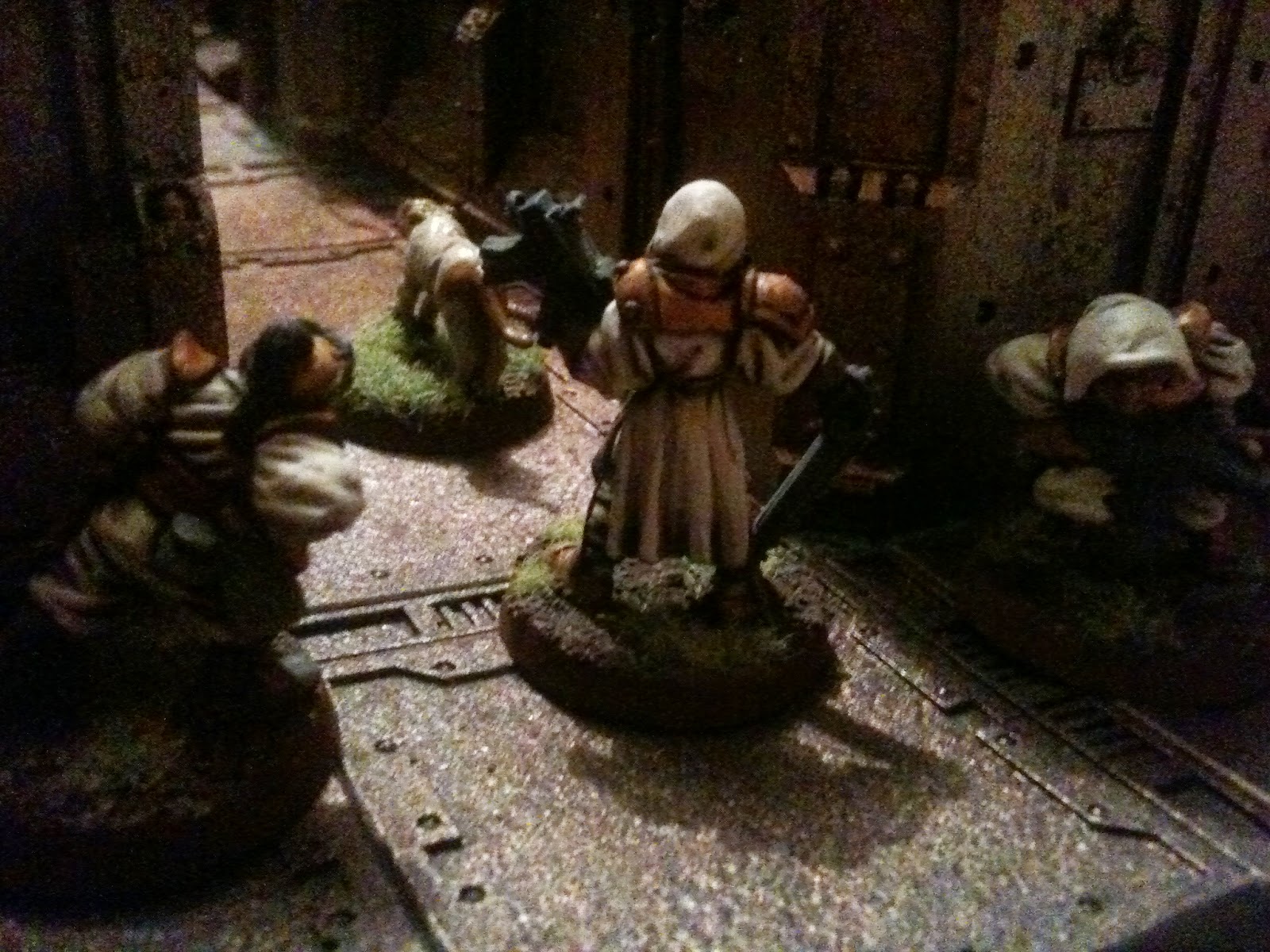 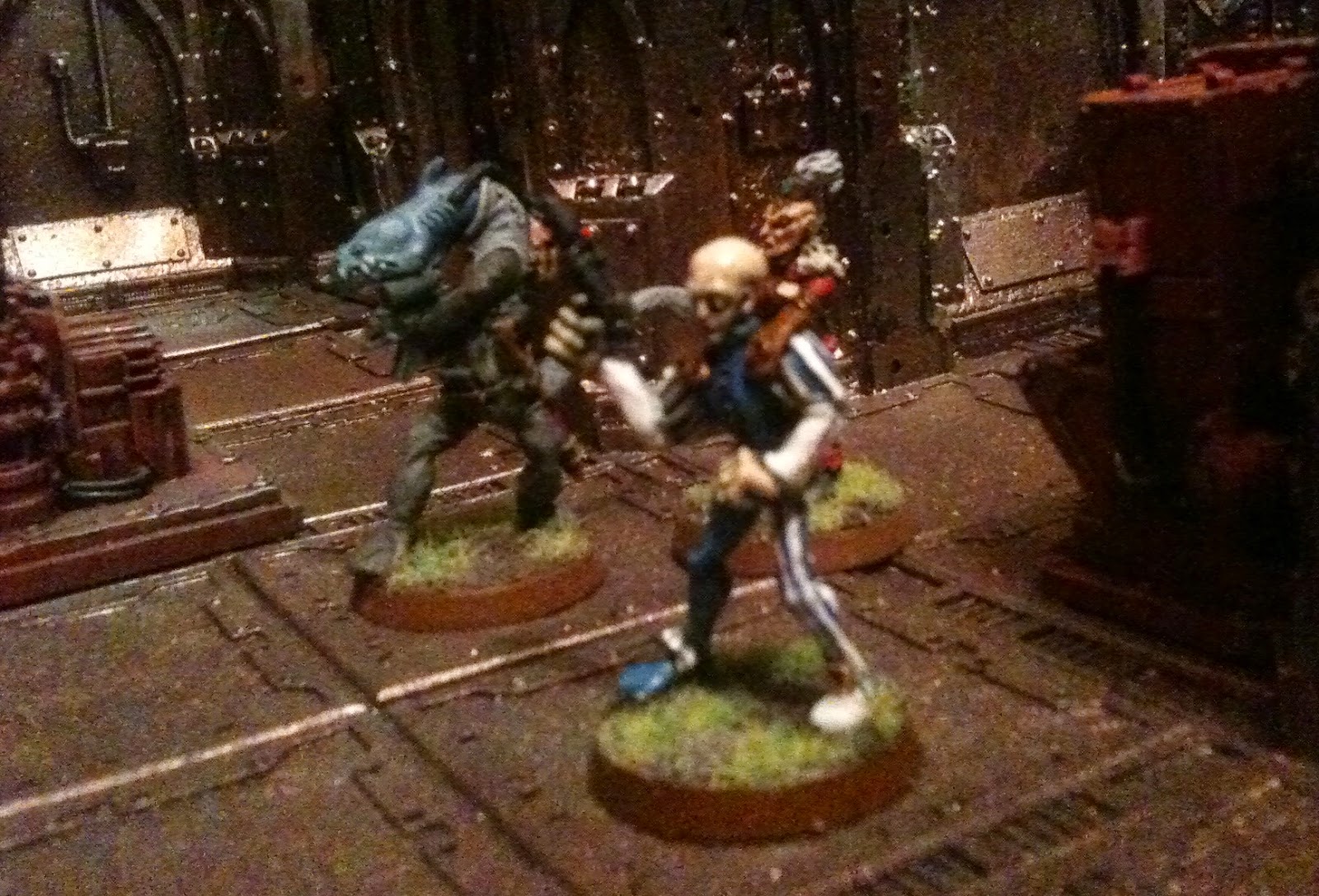 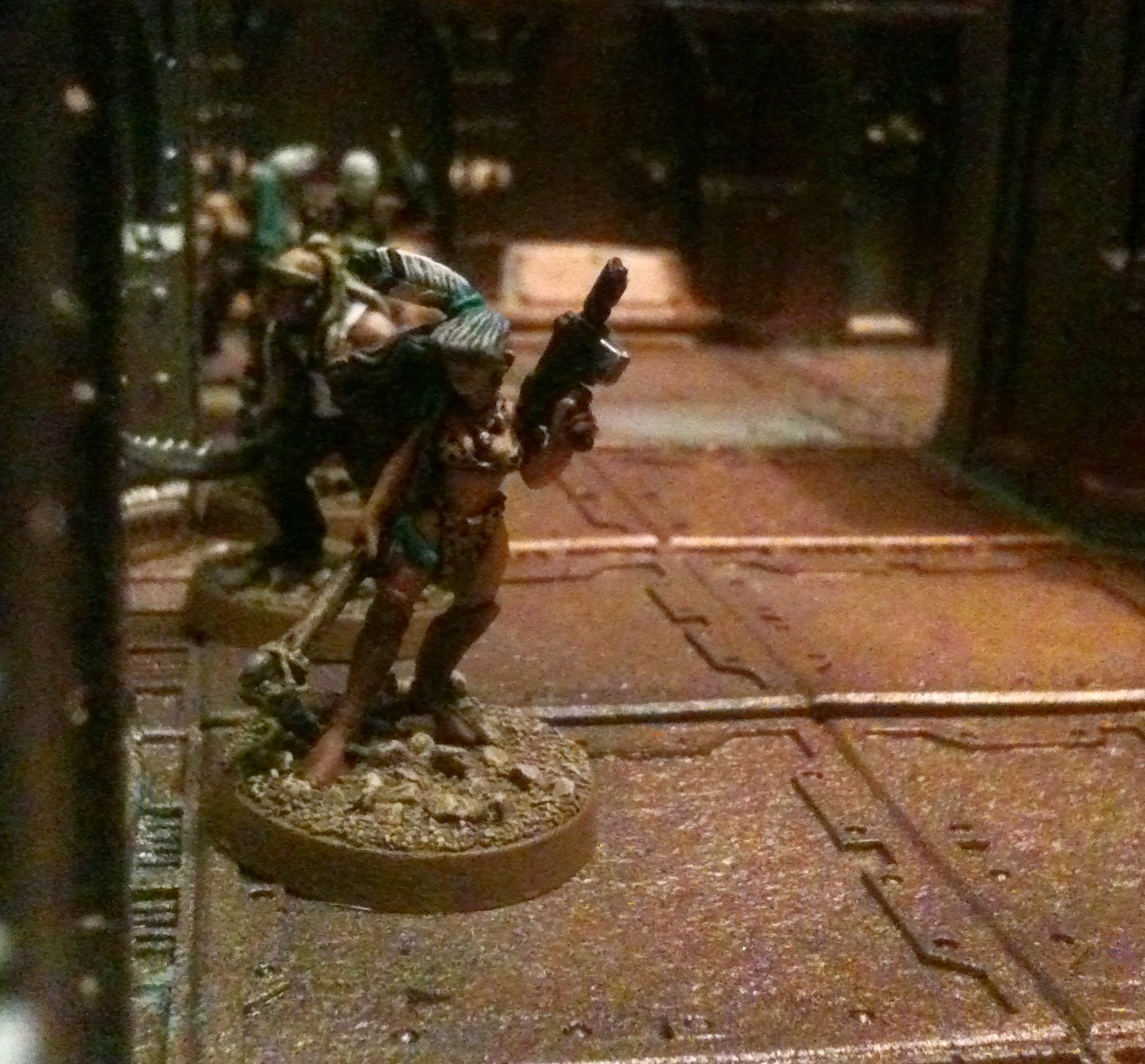 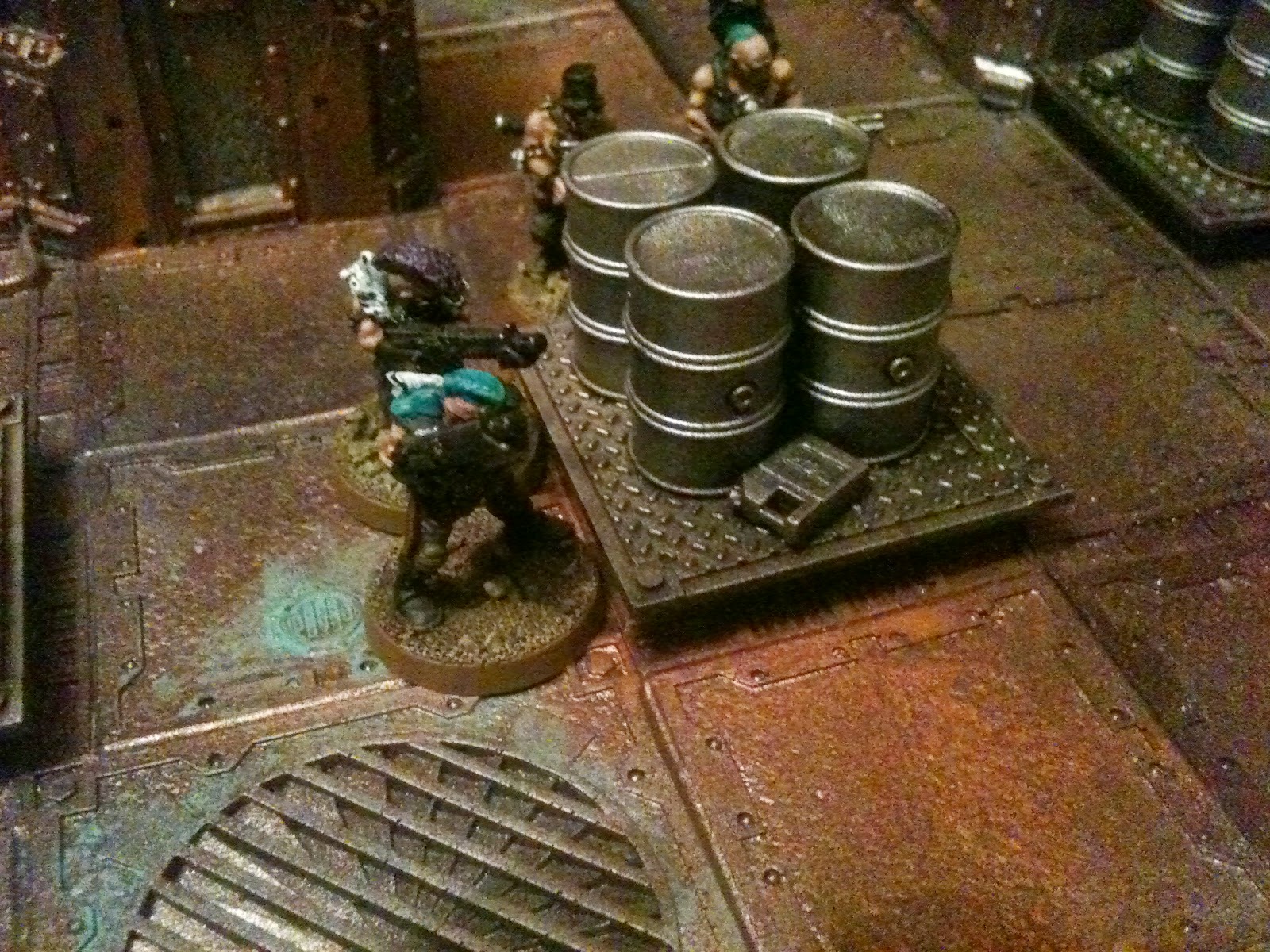 One group of techno-punks move in from the west, using the cargo crates as cover. 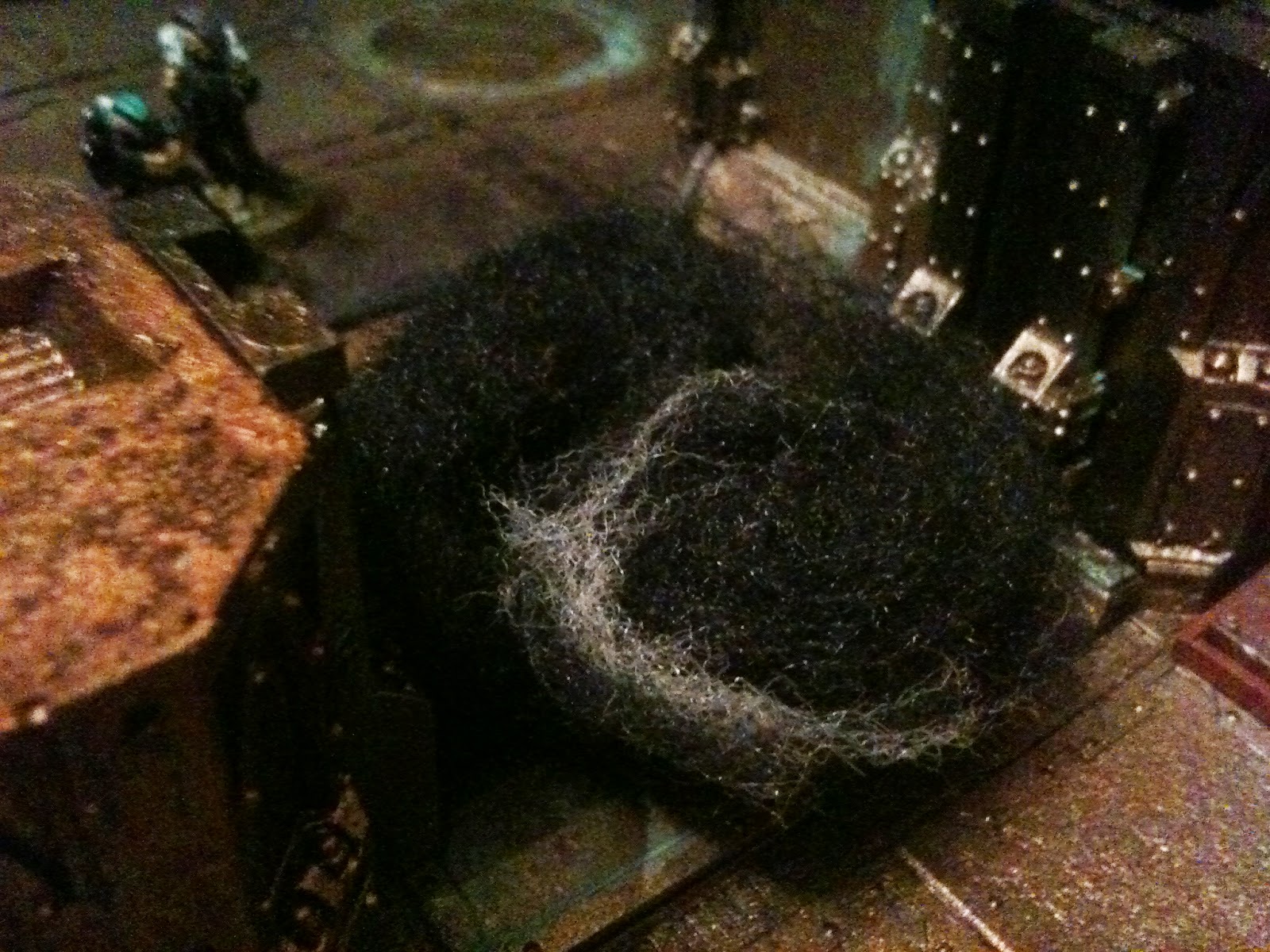 The Sensei use a Blind grenade to block the punks' flanking move. 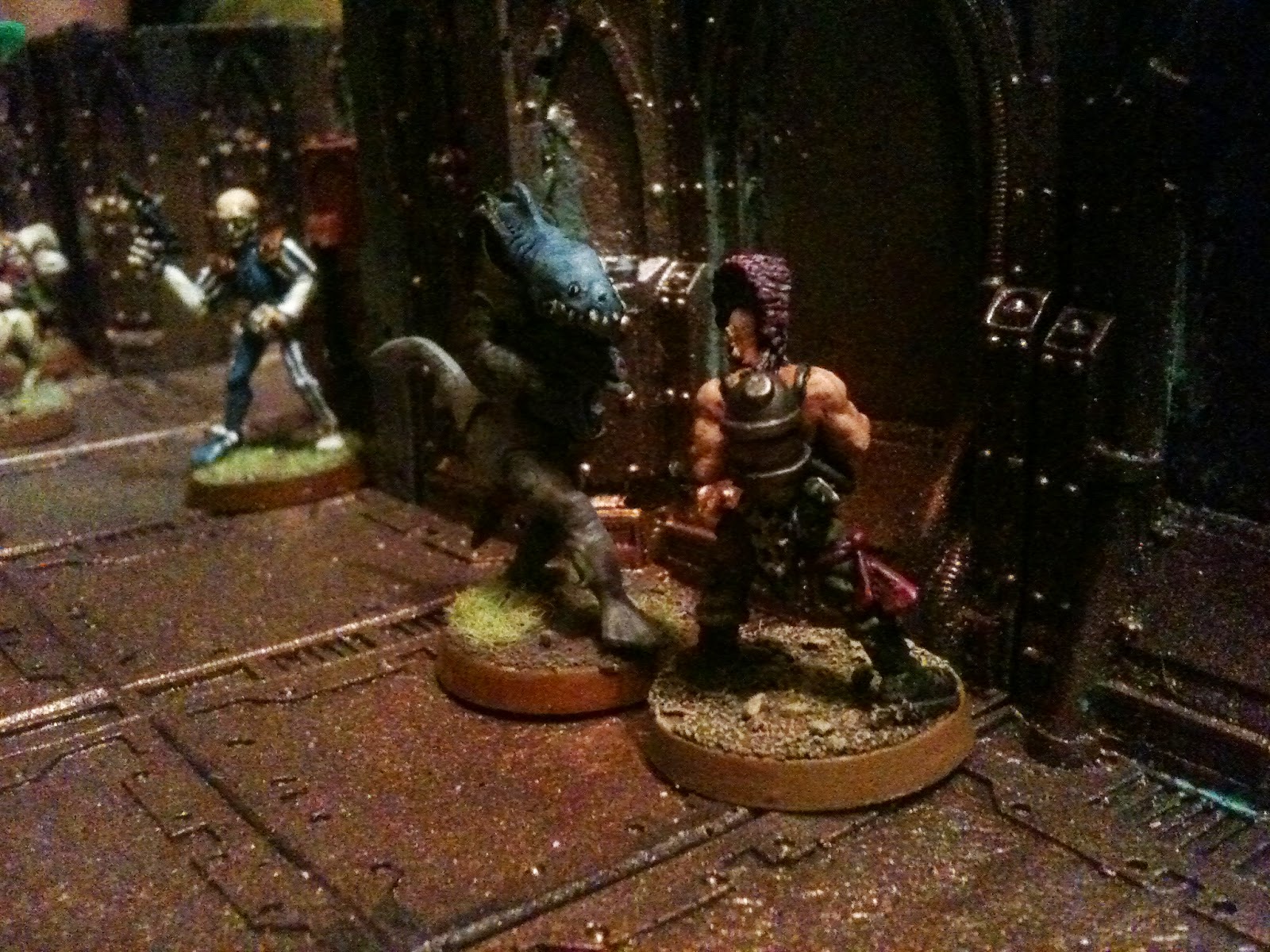 The Piscean Tracker detects an approaching punk and charges, killing him after a turn, only for Boss Hamm to counter-charge and avenge his fallen minion. 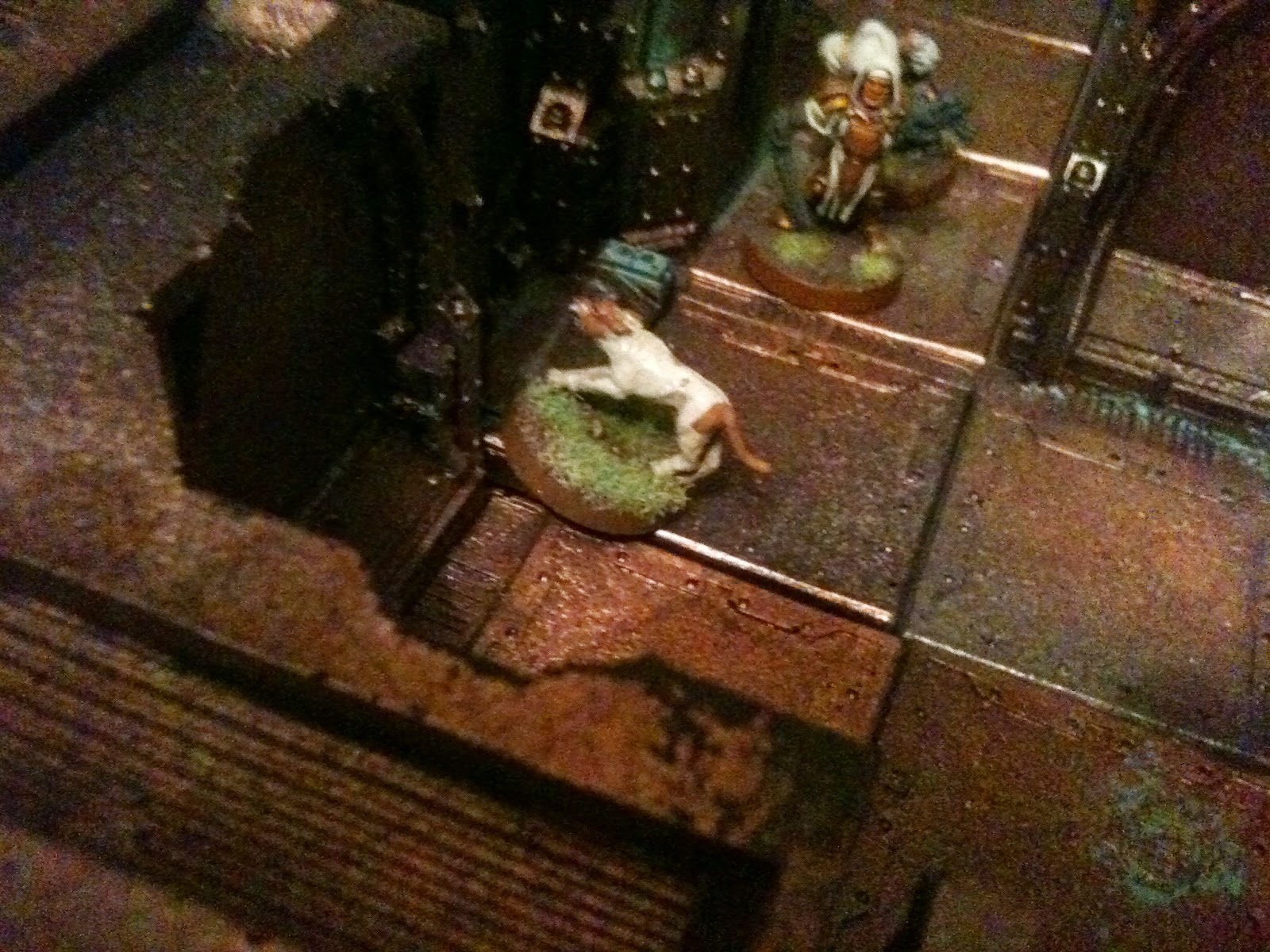 The Sensei's trusty hound points the way to the meeting area! 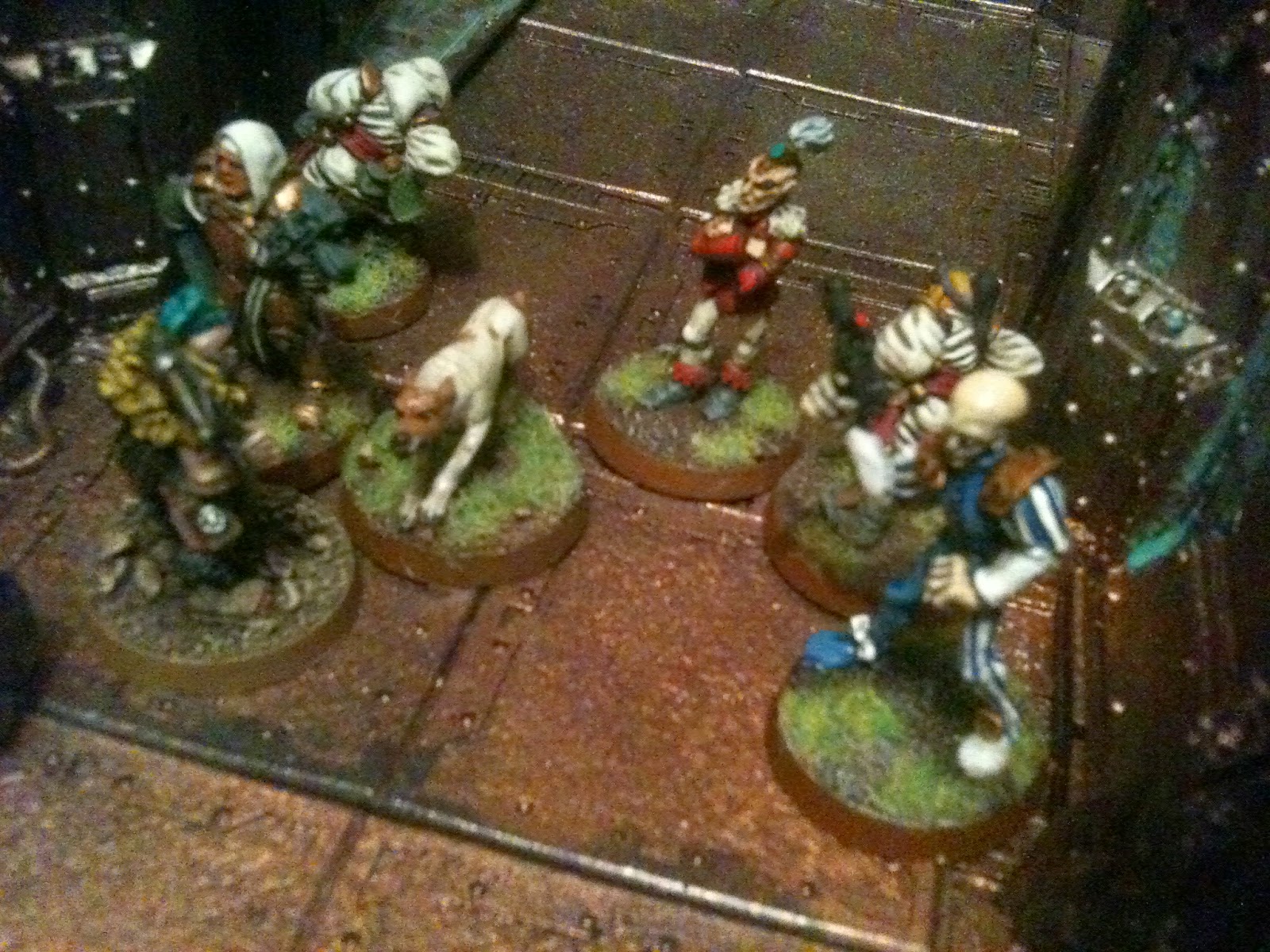 Boss Hamm and the Sensei engage. The Navigator subsequently chased off five punks, before the lone survivor rallied, turned and struck him down. 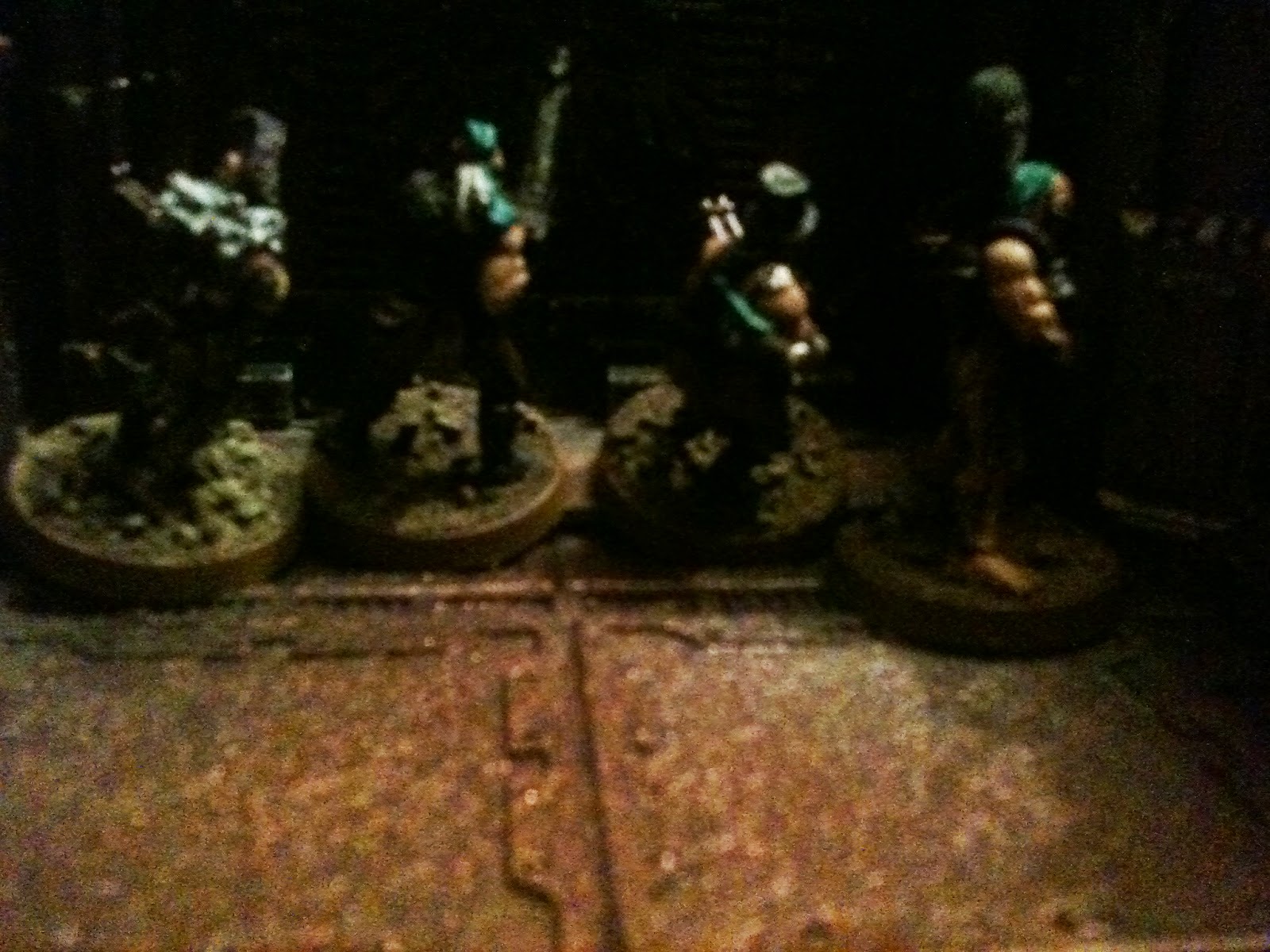 Meanwhile, the door slams in the flanking party's face (thanks to a Telekinesis power) and they fail three turns worth of Int tests trying to get it open again! 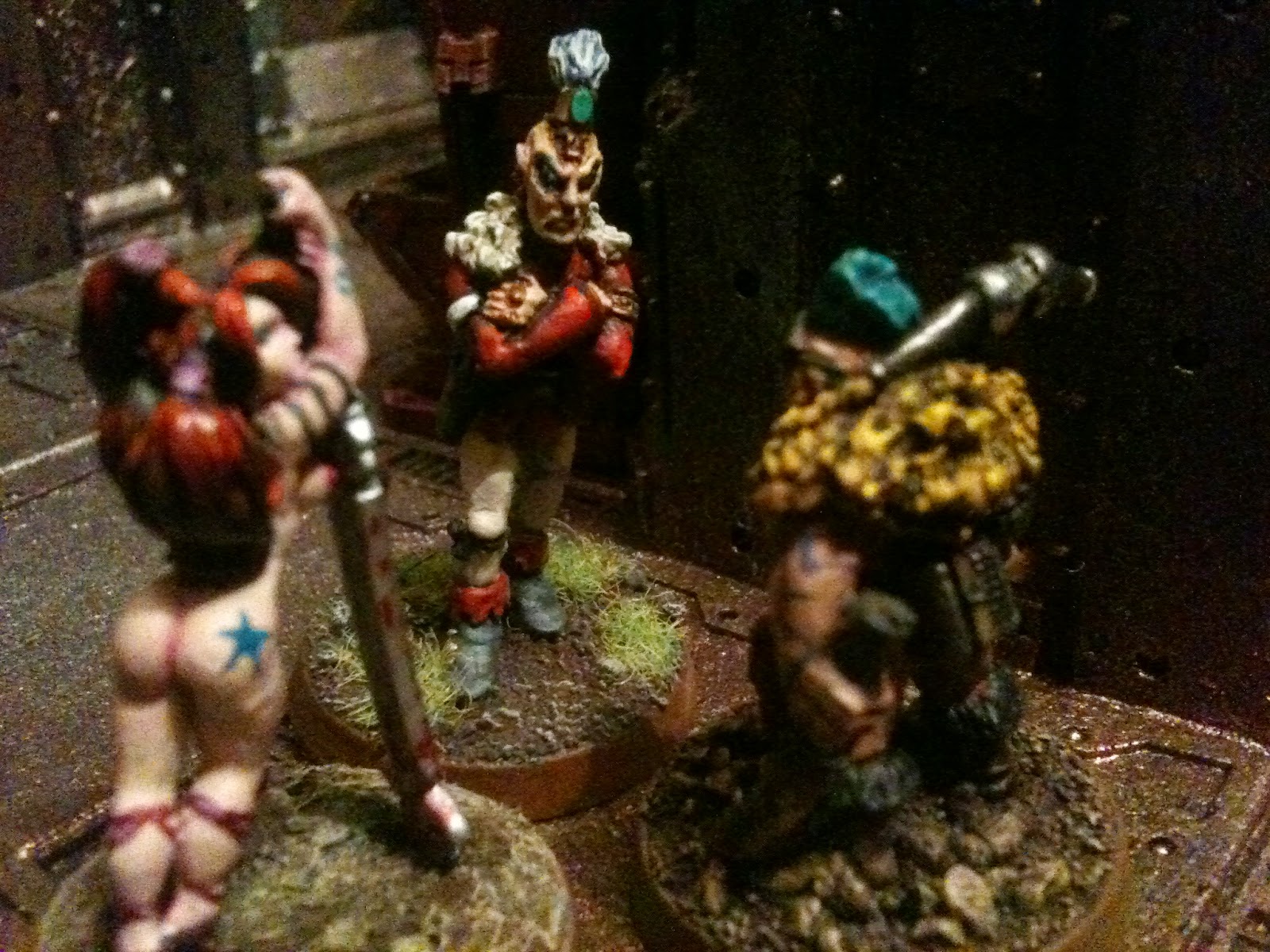 Having stalked the Eldar Free Trader through the dark tunnels, Gayle finally makes her move, charging in and using her force sword to fell the Sensei and his minion. That frees up Boss Hamm and they both close on the only survivor, capturing the Free Trader to hand over to their employer.

The Aftermath
For most of the game it looked like Gadge's Sensei would slaughter the punks and escape, but it suddenly turned. In a single turn the Navigator was killed and Gayle struck from behind, switching the result to a victory for Boss Hamm's techno-punks. We rolled to see what happened to the main characters, and the Sensei survived, albeit with serious injuries and awakening in the depths of the void station having been captured by Boss Hamm's gang.
So, next time we'll be running a prisoner rescue game, fought across several levels of the station as the Sensei call in a favour to extract their hero.