Deathwatch vs the Wyrm of Porphyria Delta 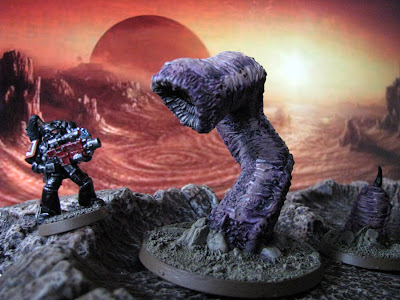 Well then, its clearly been way too long since any of us had a chance to post on Tales from the Maelstrom, but Martini Henri and myself had a chance to play a game yesterday, so we took a few shots to post here. We're both taking part in an event called the 'Inqvitational' in July - this is a campaign day to be played in Warhammer World in Nottingham, using the Inquisitor rules set with 28mm miniatures. John Blanche is taking part, and apparently special terrain is being made for the day, so it should be pretty cool. While I'm just playing, Martini Henri is GM'ing, so we thought we'd get a few practise games in to re-acquaint ourselves with the rules.

So, for this game we decided to have an Inquisitor and his two henchmen swagger into a frontier town following up reports that the inhabitants had been infected with some sort of xenos taint. His objective was to acquire a grav-sled cargo shunter carrying a pair of stasis crypts with bio samples within and to get it out safely. The enemy would be represented by the classic 'blips', so while the Inquisitor could see them on his bio-scanner he didn't know what each represented until they were revealed.

Martini Henri came up with a really good system for revealing the blips, inspired somewhat by the WW2 strategy game 'Combat Mission'. In that game, whenever your troops hear a vehicle over the hill its tagged 'Tiger', because that's what they most fear it is! As it gets closer it's inevitably downgraded, such as to 'Panzer 4' until eventually a 251 trundles around the bend and everyone breathes a sigh of relief. We did the same thing, so when the blip was revealed a Lictor was initially placed, which was later on replaced by a Genestealer, and finally by a small (and perfectly innocent )dog! (most of the time...)

So, here's a few shots from the game, along with some commentary on how events played out. 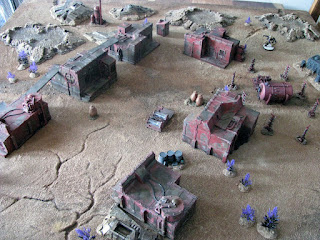 Our Soul's End, a small frontier settlement on Jeriko Reach. Quiet, ain't it...? 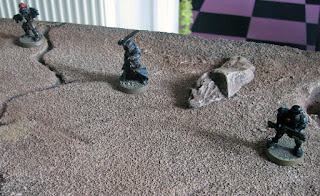 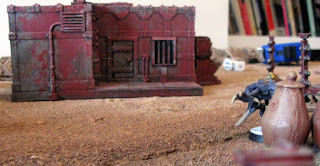 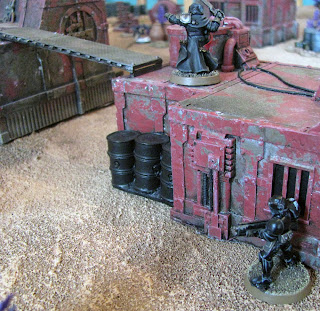 Inquisitor Sickle takes to the rooftops to get a better view of the town. 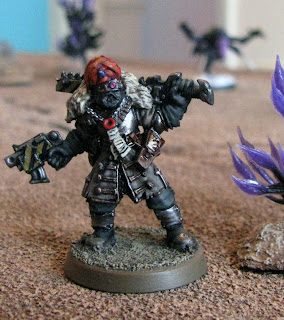 The Subhadar hears something... sure its nothing. 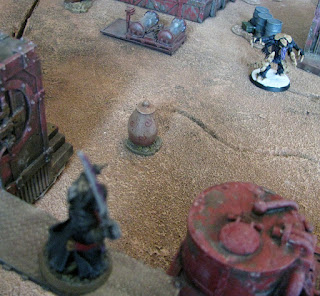 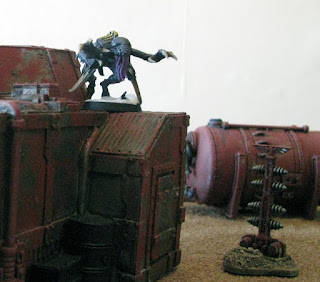 More movement, this time on the rooftops ahead. 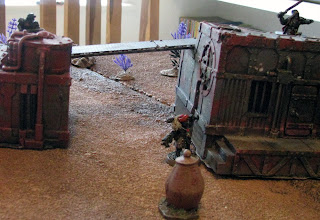 With Sickle and Max covering him, the Subhadar makes a dash for the objective. 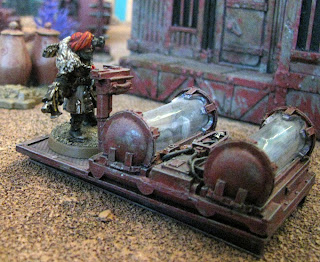 The bold henchman fires up the grav-shunter, only to vanish in a cloud of blood a moment later. 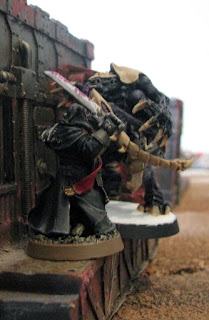 The killer reveals itself and Inquisitor Sickle leaps from the rooftop to engage it. The ensuing combat was brief but bloody, and by its end the Inquisitor was only one left standing, a fresh bio-sample in hand to take back to base.
Posted by Colonel Kane at 15:21 13 comments: