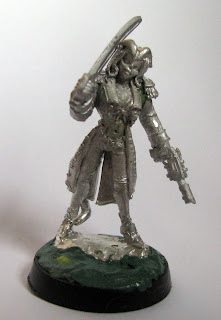 Just a quick work in progress pic of the leader of my Realm of Chaos warband (see the post of a couple of days ago). I rolled a starting profile of Rogue Trader, she follows Slaanesh and has the Bestial Face and Tail Gifts. Being a Rogue Trader she has access to all manner of wargear, and using the tables in the Rogue Trader rulebook I rolled up a las pistol and power sword as basic kit, plus four digi-weapons, a stasis field, displacer field and all manner of other weird stuff. She's based off of Reaper's Hellborn Sorceress miniature, and the arms and shoulder boards are recently released by Victoria Miniatures.

Next up I need to make her side kick, a renegade Navigator (for which I'll probably use the new plastic Chaos Sorcerer from Citadel) and then two bands of Chaos-worshipping space pirates!
Posted by Colonel Kane at 18:51 No comments:

Realm of Chaos for Adults

As a follow up to the post about us starting a Realm of Chaos campaign, the Warhammer for Adults blog has an Army Builder wossname that allows you to do so digitally (though I suspect due appeasement to the Machine God musts still be made.)

Please to check it out here.
Posted by Colonel Kane at 14:37 No comments:

http://gotflag.blogspot.co.uk/2012/07/is-retro-future-thoughs-on-rogue-trader.html?m=1
Posted by Colonel Kane at 20:33 No comments:

Well after Andy and I had generated by new character for our upcoming Rogue Trader RPG campaign (a heretical technomagus of the adeptus mechanicus who is convinced things will work if you just press the button and don't worry about the candles)we decided to have a look through the old 'Realm of Chaos' books 'Slaves to Darkness' and 'The Lost and the Damned'.

Now i bought these as a 13 or 14 year old on sale at GW Derby in the late 80s (probably because of the 'adults only' type sticker on it that was to leave me sorely disappointed...) but never really did too much with them. All a bit too crazy with D1000 rolls that could have your rampaging lord of chaos suddenly loose his legs and grow a tail for a head even if you were doing well. But we thought in the interests of exploring old school gaming we'd each have a go at creating a 40k realm of chaos warband and have a few narrative battles.

Deciding to stick by whatever the gods of fate gave us (and only re-rolling impossible to model or *really* lame mutations like 'farts a lot') Andy opted for a Slanesh renegade band and I thought i'd be clever and go for the 'Sensai' warband. For those not privy to the old rare yellow chaos book, the sensai were essentially descendants of the Emperor and about as close to Jedi as GW could get without being sued. Andy's rolls started well. He started off with a Rogue Trader who had sold his soul to chaos, gaining a bestial face and a tail for his loyalty... His first folower was a tainted navigator who had his eyes on stalks but quite fortunatley a chaos weapon (staff) forged from the ribs and still beating heart of his enemy which gave him some additional wounds. All good stuff so far and I felt slightly intimidated when Andy's next two group of followers were a couple of bands of human (7 and 5 strong) armed with shotguns and lasguns.


So what would the Sensai have to stand against this force... not much to be honest. While i appreciate it says 'sensai bands are quite small' I was expecting a bit more than a basic profile navigator with a laspistol and a grumpy old squat hero with a bolter! Luckily Andy took pity on me and let me have another roll on the followers table, this fared only marginally better with a human minor hero as a sidekick. So I can see our initial clashes being *very* short and think we might be able to get a few dozen game in each night unless my Sensai can get his act together on the recruiting front. It was pretty good fun to mess about with though but it does prove that the products that nearly drove GW crazy (the ROC books) really were the true product of chaos... or perhaps one madman.. who just happened to be the studio manager at the time (i'll mention no names).
Posted by Major Hazzard at 21:53 9 comments: