Corporal Drake’s long-range patrol has been stood down following a failed attempt to rescue a trooper captured by Eldar pirates north of the mining enclave ‘Augustine’s Regret’.

Following the firefight in the enclave and the Eldars’ capture of Trooper Noll, Drake’s section tracked the xenos to an abandoned settlement some forty kilometres north. They located the prisoner, who was being held on the upper story of a native building. A number of Eldar were seen to be patrolling the area, with two attending to their prisoner. 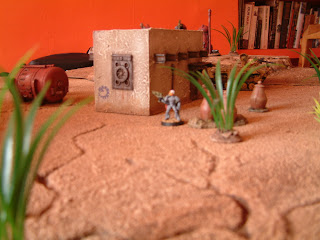 Drake positioned his missile launcher and grenade launcher as a fire support group with a good field of fire on the building, and formed the remainder of his section into an assault group, led by himself. This group infiltrated right up to the building, before the aliens’ leader rounded the corner and spotted Drake’s party. Drake and several of his men opened fire on the pirate, while two more of the assault party climbed the building’s ladder to affect a rescue of their compatriot. 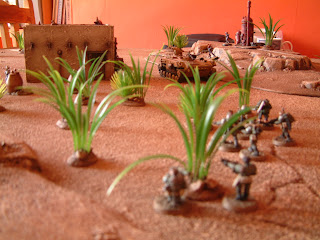 Drake’s fire caused the alien leader to withdraw, so the corporal joined the assault up the ladder.

What happened next appears uncertain. Upon reaching the roof, a brief and very close ranged firefight ensued, and one Eldar, armed with some manner of projectile launcher discharged its weapon at extreme close range, either deliberately, or negligently. The blast, some form plasma effect, caught both the firer, and the captive, and blew Corporal Drake from the roof. 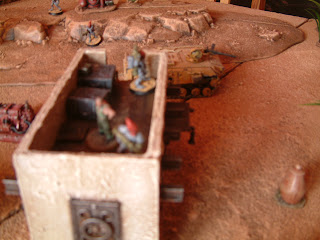 Believing the captured Trooper Noll dead in the plasma blast, and seeing that more Eldar were closing around the building, Drake had little choice but to affect a fighting withdrawal. Drake and two of his men fell back to the cover of an apparently abandoned crawler, only to find the vehicle overrun with some form of toxic growth, the fumes from which all but incapacitated Drake and Trooper Kleve. Fortunately however, the assault party was able to disengage and rendezvous with the fire support group, before escaping.

Drake’s patrol section sustained a number of light wounds, but, apart from Trooper Noll, suffered no fatalities in the assault.

Drake’s section has been exfiltrated back to head quarters for debriefing and recuperation. Initial reports suggest their sweep of the area north of the Asakhim Valley and around the Augustine’s Regret mining enclave was not in vain. Apart from the Eldar contact, the patrol reported a number of suspicious activities amongst the locals, including a large amount of seditious, anti-Imperium graffiti daubed on outlying buildings, including the one in which the Eldar housed their captive.

Aggressive patrolling of native settlements is to commence as soon as practicable. The Eldar pirates are merely a hindrance, and I will not allow my forces to be diverted chasing after them any more. I aim to flush out the real enemy, whoever, wherever, and whatever they are.