Characters of the Reach

Here're a few of the odd characters that populate Jeriko Reach and will be making an appearance in the campaign at some point. We have a bunch more to come, including some civilians from West Wind Productions 'Chaos in Cairo' range to populate the native settlements, and more Rogue Trader era bits and bobs for the games in the Mining Enclaves etc. 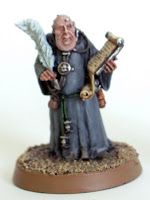 An Officio Munitorum Field Notary attached to the Imperial Guard garrison. He'll be keeping a close eye on the garrison's ammo expenditure, and may even demand to accompany Corporal Drake and his section on a mission in the near future...

A Psykana Operative, attached to the garrison. She may be taking to the field soon too, as the garrison will be needing all the psychic support it can get against the uprising's mysterious leaders. (in-game we may count her as a Wyrd for hire). (Aberrant Games Dravani Human Form). 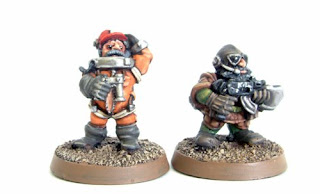 A freelance Squat engineer and his bodyguard, no doubt come to Jeriko Reach in search of valuable scrap left over from the last war.