Inspired by making some jungle terrain, and a combination of reading Harry Harrison's Death World trilogy and a load of Osprey bookss on the ANZACs in Vientnam, WW2 Jungle Tactics etc, I decided to make an Imperial Guard patrol for a game set in a death world jungle.
These guys are modeled after 22SAS in Malaya, SASR and LRRP in Vietnam, that sort of thing. I intend to make up some bad guys too - maybe some Kroot. I've also sourced a bunch of Rogue Trader Space Slann, so some games against them would be fun.
I'll be doing a flamer-carrying trooper or two (for protection against carnivorous plants) a heavy bolter, a demo expert and a trooper carrying a motion sensor. After that, if I haven't got distracted by something else I'll make them a rhino, heavily modeled on an M113 ACAV and loaded up with supplies. 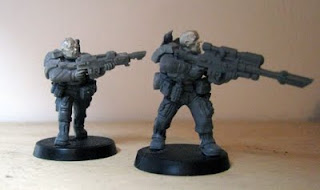 Patrol Medic (left) - he has two medikits on his back. Sharp Shooter (right). 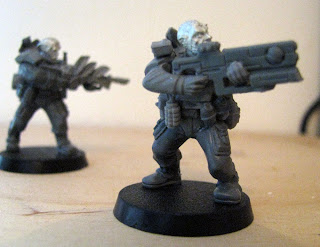 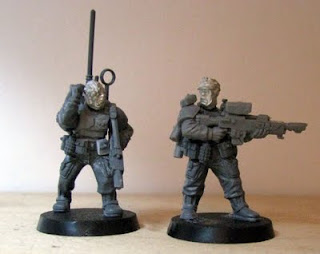 Patrol Commander (right) and signaler (left). They've been posed so the commander appears to be turning back to listen to what the radioman's reporting to him.
Posted by Colonel Kane at 17:40