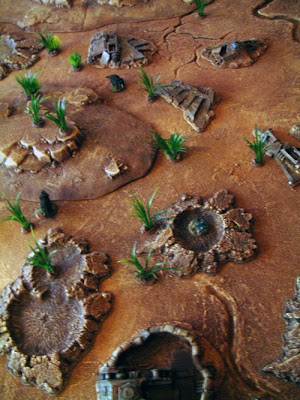 On this day a patrol from A Company led by Corporal Drake encountered a small force of Betheljinn hilltribe fighters at the head of the Asakhim Valley in an area strewn with wreckage from the war, and heavy in naturally formed craters. The tribesmen were obviously hostile, and a firefight ensued. Drake’s patrol repelled the enemy with no serious injuries suffered by his force. 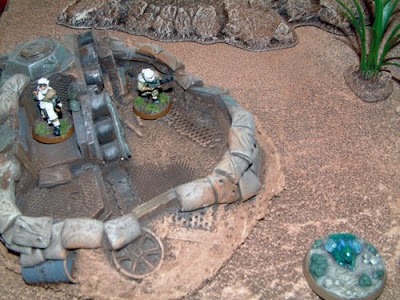 Although the contact was barely noteworthy in scale, it brought a serious concern to the fore. The same leader faced during Drake’s rescue at the New Minehead mining enclave accompanied the enemy. This individual is undoubtedly touched by the warp, and appears to in possession of prodigious witch powers. 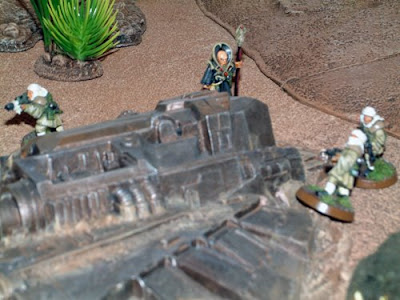 During the battle, both sides had to be wary of the native fauna, notable a Jeriko belching toad and a pair of stragglehoofs. One of the later actually attacked and seriously wounded a tribesman during the fight. Drake reports that the enemy leader then exerted some form of mind control on the stragglehoof in an effort to steer it away from his men.

The enemy put up a sterling fight before withdrawing in good order. Drake’s patrol paused to regroup and treat what injuries had been suffered, before continuing the patrol of the Asakhim valley. The remainder of B platoon is standing to as a rapid reaction force should Drake encounter greater numbers of the enemy further up the valley.

Addendum to report: During the night Drake reported a sighting of what may be an Eldar vessel passing low over the Asakhim-Narawa Pass. Staff meeting to be convened.